Parties set for a tough contest in Mediterranean 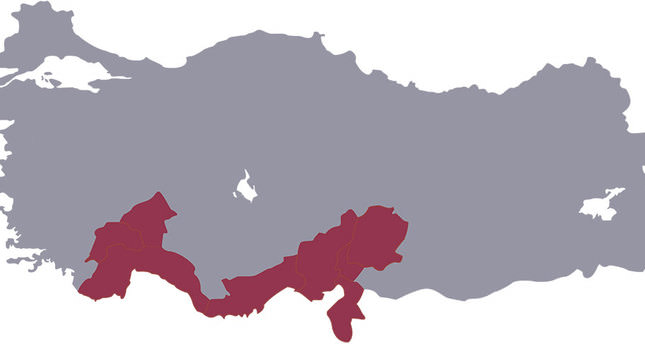 by Sena Alkan Mar 18, 2014 12:00 am
ISTANBUL – Turkey's south will experience very colorful local elections on March 30, according to the latest polls from the region.

The Objective Research Center's (ORC) polls in the critical cities of Antalya, Adana, Hatay and Mersin show an upcoming tight race in the region. Accepted as one of Turkey's top tourist cities, Antalya will see the tightest mayoral race. The poll of 4,600 persons indicates that Antalya's current mayor and CHP candidate Mustafa Akaydın is expected to receive 39.0 percent of the votes.

As election fever gripped the country, politics has been the topic of discussion across the country for nearly two months. The mandatory electoral silence about the polls in order not to unduly influence public opinion is set to begin tomorrow. According to ORC's survey, which was conducted from March 7 to March 13 in critical cities, 45.7 percent of 12,300 respondents in 81 cities say they will vote for the AK Party, while 28.3 percent say they will vote for the Republican People's Party (CHP) on March 30. The Nationalist Movement Party (MHP) is expected to trail the CHP with 16 percent of the votes, according to poll figures.

The latest polls in Istanbul and Ankara indicate that the AK Party is expected to win by a landslide in those cities. Istanbul's AK Party mayoral incumbent and candidate Kadir Topbaş, who has served for 10 years, is expected to receive 46.3 of the votes, increasing his votes compared to the 2009 local elections. CHP candidate and Şişli incumbent Mayor Mustafa Sarıgül is expected to tail Topbaş with 37.4 percent.

The capital city of Turkey, Ankara, seems likely to re-elect current Mayor Melih Gökçek, according to the latest poll. AK Party candidate Gökçek, who has been serving as mayor of Ankara since 1994, is expected to garner 48.2 of Ankara residents' votes. CHP candidate Mansur Yavaş, MHP's current mayor in Ankara's touristic Beypazarı District, is expected to receive 34 percent of the votes. Yavaş transferred from the MHP to CHP after disregarding MHP's grassroots, apparently resulting in a loss for his former party.

MHP mayoral candidate Mevlüt Karakaya is expected to be out of the race with 14.6 percent of the votes.

The AK Party deputy and mayoral candidate Menderes Türel, who served as mayor between 2004 and 2009, is expected to garner 33.1 percent of the votes, while 15.4 of the respondents say they will vote for the MHP candidate Kemal Çelik. In the 2009 local elections, the AK Party received about 35 percent of votes, losing Antalya to the CHP, which amassed 40.8 percent. Making significant investments in the city, Prime Minister Recep Tayyip Erdoğan indicated that he wanted to win Antalya back during his postelection speech.

In his interview with Daily Sabah, CHP Antalya deputy Gürkut Acer made radical remarks concerning the mayoral race in Antalya.

Describing Antalya's current mayor Mustafa Akaydın as one of the most successful mayors in Turkey, Acer said, "Antalya residents are happy with their mayor, and the results will definitely be in favor of the CHP."

Touching on the CHP's six Antalya rallies in three days, he said all the election campaigns in Antalya were supported by huge crowds. Acer claimed that Akaydın invested in Antalya to solve its traffic problems with a "master traffic plan."

He said, "When Akaydın is elected for the next term, the municipality will completely renew the city with huge projects, such as solar energy, film festivals and pavement."

He said: "The CHP municipality broke all its promises to Antalya's residents. They promised to construct solar energy, traffic planning, employment, but they did not keep those promises. Menderes Türel kept all of his promises and made huge contributions to the city during his mayoral period, and Antalya residents believe in him."

Daily Sabah interviewed locals in Antalya. Canan Nazlı Köse said, "I will vote for the CHP because CHP's ideologies are in accord with mine."

Praising the AK Party's contribution during Türel's mayoral period, Selda Çalışkan said: " I will vote for the AK Party. As a woman wearing the hijab, I am a teacher at state school. I was really upset when the CHP won Antalya, but I hope that the AK Party will have the upper hand in this election."

Another city that will experience a tight race is Mersin. According to the poll results, the MHP and CHP will be neck-and-neck in the upcoming elections.

Out of 3,820 people surveyed in Mersin, MHP candidate Burhanettin Kocamaz is expected to receive about 29.5 of the votes, whereas 28.9 of the respondents say they will vote for the CHP candidate Macit Özcan. AK Party candidate Mustafa Sever is expected to garner 24 percent. The residents who spoke to Daily Sabah evaluated the local elections.

Praising CHP's services in Mersin, Mine Yedikardeş said: "I will vote for the CHP. They renewed the coastline, and they developed the transportation system."

Also, I believe that if the AK Party wins the local elections, the central government will be stronger. It is a fact that of all governments, the AK Party has been the best at handling the economy. Mersin is becoming one of the biggest developed cities of the Mediterranean region."
According to the latest polls, Adana will also see a feast of democracy in terms of diversity. In 2009, Adana experienced the tightest race between the MHP and the AK Party, and the city is likely to experience another one, as the political parties are running neck-to-neck. While the AK Party garnered 29.5 percent of the votes, the MHP received 29.7 percent.

The recent poll indicates that 31.5 of the residents will vote for the AK Party in the upcoming elections. CHP candidate Yıldıray Arıkan is expected to receive about 28.4 percent, whereas MHP candidate Hüseyin Sözlü is expected to tail the CHP with 28.1 percent.

Ahmet Durmuş, born and raised in Adana, said: "I will vote for the AK Party. I have evaluated Turkey's situation objectively, and I believe that the AK Party will be beneficial for my country. I have sympathy for my prime minister, and I trust him."

Nuri Günaydın from Adana said, "I have no association with the party, but Atatürk established the Turkish Republic and the CHP, that's why, I will vote for the CHP." Serkan Karalı said: "I will vote for the MHP because Turkey was unfair to its own citizens during the peace process. The MHP always supports Turkish citizens." In Hatay, another city in southern Turkey, out of 3,250 people surveyed, 39.6 percent say they will vote for the AK Party candidate Sadullah Ergin, while 38.1 percent will vote for the CHP candidate Lütfü Savaş. MHP candidate Mete Aslan appears to be out of the race with 15 percent of the votes.

Rahmi Taşkın, a state officer living in Hatay, said: "I will vote for the AK Party due to economic developments across the country. I think the government also has so far been successful in handling the Syrian refugee problem. Hatay's economy has not been affected negatively. Instead, we see some development. I believe the same parties must be in Ankara (ruling party) and in my city to in order for the people to receive better services."