Gül warns of threat to reconciliation 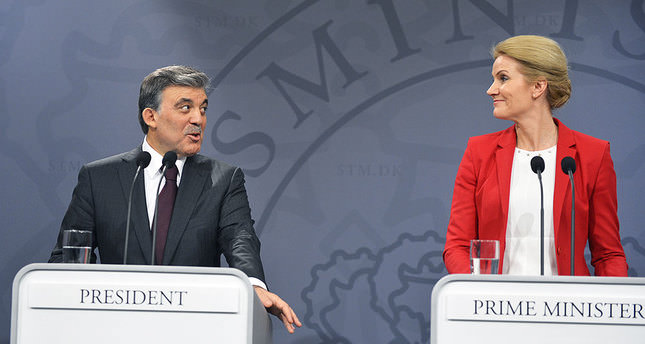 by Yusuf Selman İnanç Mar 19, 2014 12:00 am
ISTANBUL – President Abdullah Gül, who returned from an official 3-day visit from Denmark yesterday, said illegal groups that infiltrated the state had tried to scuttle the reconciliation process that was initiated by the government to improve the rights and freedoms of Turkey's Kurdish citizens.

President Abdullah Gül addressed press members in Denmark, responding to questions about the current state of events in Turkey and highlighted the significance of the reconciliation process, while emphasizing the idea that the country's unity should not be questioned.

"We should find means to resolve issues under a framework of equality in order to live in peace," said the president, who expressed his concern about the current tense political atmosphere evident in the country ahead of the local elections and stated that he is disturbed by what is going on. Underlining the significance of refocusing the government's attention to the reform process following the local elections, Gül stated it is crucial to continue working on reforms regardless of whether or not they are demanded by the European Union.

"We should make the reforms for our own country. If we do, the legal system and the judiciary's standards will be improved and be more accountable," said Gül, who indicated that failure to do so may result in a regression to the past. In response to a question about what is the missing factor in the Turkish political system that results in the multiplication of issues, whether it concerns the lack of rules and regulations or their implementation and what would happen if problems persisted until the presidential elections, Gül stated that it is unreasonable to draw parallels between the two as there will always be elections in Turkey. "We cannot wait for the issues to be resolved in order to have elections," said the president, as he emphasized the significance of rules and regulations, but they are not clear. On the other hand, he evaluated the current state of events as being a part of a conjuncture that should soon be overcome and that the focus should be directed towards the reconciliation process, which he considers to be the most important of issues. In addition, Gül pointed to the fact that the law passed by Parliament last week contained important articles about the reconciliation process, but nobody seemed to pay attention to it.

Gül commented on the Crimean issue and stated Turkey recognizes Ukraine's territorial integrity, along with Georgia's and said the disintegration of territories such as Crimea, Abkhazia and Ossetia could bring back the Cold War days, harming everyone.

He also acknowledged that there have been attempts by a certain group in state institutions that attempted to pay allegiance to a movement rather than the state and explained that the state should and will take measures under a legal framework to deal with such unlawfulness.