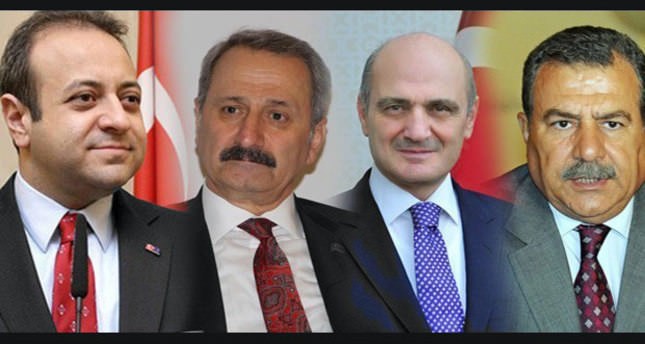 The ruling Justice and Development Party filed a motion for a parliamentary inquiry into the conduct of four former ministers, who were accused of corruption by prosecutors under the Gülen Movement's influence

ISTANBUL – The AK Party has submitted an inquiry motion to the Turkish Parliament to investigate four former ministers accused of corruption after a general meeting request to discuss the summary of proceedings was denied by Sadık Yakut, the deputy chairman of the AK Party group and deputy speaker of the Grand National Assembly of Turkey (TBMM).

The Parliament voted to decide whether the motion for a General Assembly meeting should be accepted or not, but there was a dispute amongst the parliamentarians, resulting in an electronic voting process suggested by Yakut, while the Republican People's Party (CHP) parliamentarians protested and booed. The results indicated 158 voted yes for a general assembly meeting, while 259 voted no.

The main opposition CHP requested the reading of the entire summary of proceedings in the general assembly meeting after they read out loud former Minister of Environment and Urban Planning Erdoğan Bayraktar's summary of proceedings. Akif Hamzaçebi, the CHP's group deputy chairman, claimed Parliament is not entitled to modify the house regulations after a request has been made, while the Nationalist Movement Party's (MHP) Group Deputy Chairman Yusuf Halaçoğlu criticized the AK Party Group Deputy Chairman Sadık Yakut, for wrongfully speaking on behalf of the speaker of Parliament and said it was not fair to circumvent the reading of the summary of proceedings.

The assembly paused for 40 minutes after tensions built up between the parties. Yakut stated after the break that the 100th article of the Constitution prohibits the disclosure of files protected by confidentiality measures in efforts to protect third parties from victimization. "Therefore, the summary of proceedings will not be read out loud," said Yakut, who indicated that his opinion has not changed and that the 157th article of the Turkish Code of Penal Procedure orders this.

The opposition parties disputed the decision, and Yakut responded to this by referring to the inquiry motion submitted by the AK Party and CHP parliamentarians, but the CHP and MHP still opposed him, which resulted in Yakut starting a procedural discussion. The AK Party's group deputy chairman, Nurettin Canikli, stated that this is an investigation that had not reached a resolution before it was submitted to the TBMM or reached the bill of indictment step, and according to the 157th article of the Turkish Code of Penal Procedure and the Constitution, any inquiry that is not at the stage of bill of indictment has to be kept confidential and the information contained cannot be exposed or revealed to anyone. "We are not hiding anything," said Yakut, who called on the opposition parties to start an investigation commission about the four former ministers accused of corruption charges. Hamzaçebi criticized Canikli and blamed him for attempting to cover up the reading of the summary of proceedings to prevent the revelation of corruption, but Yakut stated he has not changed his mind about the matter.

Bekir Bozdağ, the minister of justice, spoke on behalf of the AK Party at the meeting and stated that the summary of proceedings files came to the TBMM on Jan. 3 and were returned after 26 days, and indicated that the ministry did not have the prerogatives of inspecting the contents of the files. Bozdağ also criticized the opposition for waiting until the local elections to bring the issue to the Parliament's agenda, as three months had passed. "Our only concern is to bring to light the truth about the matter and not ruin things before the local elections," said the minister, who claimed they would not hesitate to punish those who violate the law.

Cemil Çiçek, speaker of the Parliament, commented on the summary of proceedings yesterday in a press statement that said it is crucial to ensure confidentiality while the preliminary inquiry is taking place. "As the speaker of the TBMM, I am obliged to obey the law and implement legal procedures," said Çiçek, who added that he was not intending to cover up any crimes, if they had been committed by ministers.