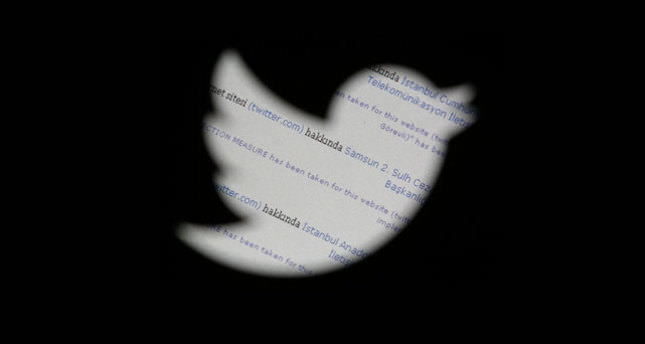 by Nurbanu Kızıl Mar 21, 2014 12:00 am
ISTANBUL — Access to popular social media website Twitter was blocked by Turkey's Information and Communication Technologies Authority (BTK) Thursday, based on charges that the social media giant failed to protect personal rights and privacy. The decision sparked debates about freedom of expression in the country, while supporters of the decision claim it was necessary to ensure protection of privacy. Twitter is seen by authorities as repeatedly ignoring Turkish laws and regulations. The BTK issued a statement about the ban and reported Twitter has infringed court decisions to block access to content violating personal rights and confidentiality of privacy. "With regards to the implementation of court orders, Twitter has remained indifferent despite our consistent efforts and attempts," said the statement, and it said Twitter was a foreign-based website that persistently disregarded the laws and regulations of Turkey and that the ban would serve as a preventative measure.

The decision has received criticism from various segments of the society with a wide range of individuals condemning the ban. Stefan Füle, the European Commissioner for Enlargement and European Neighborhood Policy, said that he was "gravely concerned by blocked Twitter" and stated being free to communicate and freely choosing the means to do it is a fundamental EU value. "Open debate promotes transparency and accountability and ultimately reinforces democracy; such debate needs to be strengthened everywhere, including in Turkey," said Füle in his official European Commission press release. President Abdullah Gül, through his Twitter account, also indicated that a complete ban on social media platforms cannot be approved and said that he was hoping the ban will not last long.

Twitter's @policy account suggested Turkish users send tweets through the use of SMS messages for different carriers after the website was blocked. Despite the closure, there was no decrease in the number of tweets posted in Turkey according to statistics published by Twitturk:

About 1.8 million tweets are posted by Turkish users on a daily basis and over 500,000 tweets were posted within 10 hours of the ban.
Government sources claim the closure of the social media platform was not a ban or censorship, and it was a preventative measure to compel Twitter to abide by Turkish laws rather than censoring users, as evident by the statistics. Deputy Prime Minister Ali Babacan in a televised broadcast stated that the decision was made compulsory, as Twitter was violating court rulings. "I do not think this will last long," said Babacan, who noted it was necessary for the government to take action in cases where infringement of the law is an issue. Babacan also noted such issues were discussed worldwide and stated world leaders took note of the issue at the last Davos Summit and were all looking for solutions, "Technology in particular advances at a fast pace, but laws and regulations cannot seem to keep pace with the speed," said Babacan, and he went on to explain many things (such as hate speech) that would be considered as a crime if it was published in a newspaper, but does not get equal treatment by law because it is published electronically. The deputy prime minister also touched on the notion that openly insulting someone on the street would receive punishment by law, but when such actions are conducted online, the law is not taken into consideration, as social media platforms may refuse to abide by local laws and regulations and do not provide governments with correspondents or representatives to reach a resolution.

A significant number of people have been victimized by Twitter's indifference to removing content violating personal rights. İsmet Özel, an Istanbul-based poet, filed a lawsuit at Istanbul's 19th Criminal Court of Peace on charges that his personal rights have been violated by a fake twitter account. The court's final decision ruled that the associated Twitter accounts be closed, but Twitter failed to take action.

An individual, C.K. from Samsun, also filed a lawsuit at courts regarding fake accounts publishing obscene content under her name, and the courts ruled to block access to the offensive material, but Twitter failed to abide by the rulings once again. Former Minister of Transportation, Maritime Affairs and Communications Binali Yıldırım also filed a lawsuit at Istanbul's 5th Criminal Court of Peace for a fake Twitter account "making false allegations infringing personal rights," and on March 18, the court ruled to block access to the aforementioned account, but Twitter did not abide by the ruling.

Prime Minister Erdoğan's key political advisor, Yalçın Akdoğan, made compelling remarks about the issue and stated a complete block of access to Twitter was not in question and criticized the social media platform for failing to abide by Turkish laws and regulations. Twitter has persistently ignored court rulings, victimizing a number of people according to Akdoğan, who noted that the issues in question were directly related to personal rights and not political matters.

He mentioned when there is offensive content on Facebook, and the courts rule that they should be removed, the website automatically removes it, whereas Twitter does not do it. "Twitter does not recognize the Turkish Republic or its laws or any personal rights and liberties," claimed Akdoğan, who blamed the social media platform for explicit "bullying." He also harshly criticized the Twitter administration for taking advantage of the issue by encouraging people to send tweets through SMS messages to fill their pockets and suggested actors and allies should refrain from falsely depicting Turkey as an underdeveloped authoritarian state as Turkey has not completely censored Twitter.

Lawyer and Parliament member Bülent Turan told Daily Sabah that the current efforts to attribute the closing of Twitter to the prime minister's speech in Bursa on Thursday are baseless allegations. "The issue here is that Twitter's administration has refused to execute court orders, which is unacceptable, and the enforcement of penalties are inevitable," said Turan, who pointed out that Twitter respects court orders in England, France and the United States, but it turns a blind eye to the Turkish legal system.

Despite consistent efforts by the Turkish state, Twitter has refused to open an office in the country. However, the recent blocking of access has urged administrators to hire representatives in Turkey.

Lawyers from the ELİG law firm, representing Twitter, immediately flew to Ankara to discuss the matter.

Deputy Prime Minister Beşir Atalay touched on the matter and referred to the recent regulations that were passed by Parliament to protect personal privacy and rights, while ensuring only offensive content would be removed without blocking the website entirely, but the technical infrastructure of Twitter refuses to abide by these legal procedures and stated that his party is closely involved in using social media and believe it is a useful tool.

Deputy Prime Minister Bülent Arınç also commented, stating that it was not censorship but was a preventative measure to stop access to content blocked by the courts. Courts throughout the world consider crimes committed online to be actual crimes said Arınç, who claimed that the measures were taken specifically against Twitter's administration for failing to abide by laws. He also noted it was not the government that blocked access to Twitter, but the Telecommunications Authority (TİB) to fulfill court orders.

Turkey has previously approached Twitter and encouraged them to establish an office here in order to avoid controversy caused by the fact that courts in Turkey are unable to request IP addresses from Twitter's headquarters based in San Francisco, which takes about seven months.

The recent Internet law was passed to encourage social media platforms to open headquarters in Turkey. The Transparency Report issued by Twitter in February revealed that Twitter has responded to removal of accounts and content: The administration has disclosed 69 percent of requests by the U.S. government for the revelation of confidential data, while in Brazil it has responded positively to 33 percent of court orders, and similar measures were taken in France, India and Russia, and the Turkish government currently requests equal treatment. For instance, the micro-blogging site has previously given data to French authorities when a series of anti-Semitic tweets were posted and immediately removed the content and blocked the account of a prohibited neo-Nazi group as requested by government authorities.