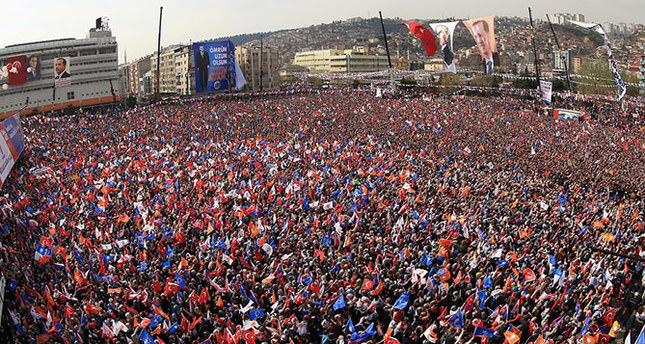 by daily sabah Mar 23, 2014 12:00 am
KOCAELI — As the local elections near, party meetings have become much more critical. Prime Minister Recep Tayyip Erdoğan spoke heavy of his foes.

Some of the major points he touched upon have been listed below.

The PM said that Kocaeli has made their decision. Pointing out that they have been in eight other elections prior, Erdoğan said that they have yet to experience anywere so crowded, in reference to the large crowd that gathered to hear him speak.

Erdoğan also struck down claims that people were being brought in from other cities to make the meetings seem crowded. "Our people love us", he said, adding, "they cannot understand this."

PM Erdoğan told the people not to worry and said they know who the thieves of the Republican People's Party in Kocaeli are.

"A certain individual in Pennsylvania bought land near his ranch, and built a montage factory. That's where these montages are being made. He has very talented nephews. What kind of Imam is this," the Prime Minister asked.

Firing back against the numerous allegations made against him, the PM inferred that he knows about said individual's house in the district of Altunizade as well as his villa in Pennsylvania.