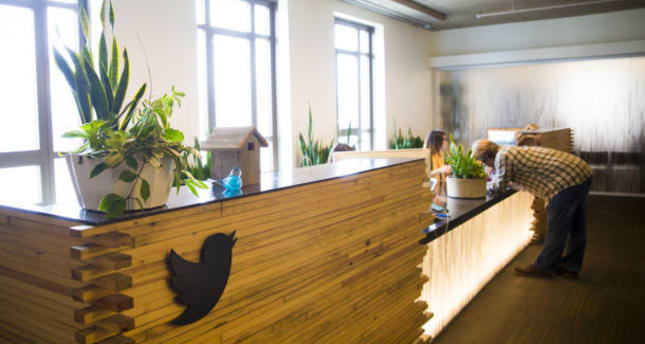 by daily sabah Mar 23, 2014 12:00 am
ISTANBUL — Twitter started to positively respond to the requests of Turkish authorities shortly after access to the micro-blogging site was blocked by Turkey's Telecommunications Authority (BTK) midnight on Thursday. The San Francisco-based company belatedly decided to suspend accounts previously requested on the basis of court rulings.

While many have criticized the closure of Twitter as limiting freedom of expression, others defended it on the grounds that it was a necessary measure to force the company to abide by court rulings involving protection of people's rights and privacy.

One of the most controversial cases resulting in the website's closure involved an account falsely created under the name C.K. and published obscene material. As a result, C.K took the matter to the courts which ordered the account to be closed, but Twitter refused to take the account down. Similar cases were brought to the court's attention and it was ruled that relevant accounts violating personal privacy and rights should be suspended. Despite these court rulings, Twitter consistently refused to abide by the decisions even though it has complied with such rulings throughout the world, includingin the U.S., France, Germany and India.

The company immediately hired lawyers after access to the website was denied by the BTK in order to discuss the matter with Turkish authorities. Previously, Twitter did not have any representatives with which the Turkish authorities could discuss the dispute. A similar case occurred in 2010 when access to YouTube was blocked by the courts on the grounds that it refused to take down videos insulting Atatürk, the founder of the Republic of Turkey. The company eventually responded to the requests, which resulted in the lifting of the block of access after two years. According to Turkey's Telecommunications Directorate (TİB), Twitter removed the false account created under C.K.'s name shortly after the company's lawyers discussed the matter with Turkish authorities.

The office of the prime minister sent a press statement to international news agencies saying, "Twitter has been a tool to publish unlawfully acquired recordings to systematically destroy people's reputation, along with the publication of fabricated and fake recordings." The statement said the government aims to provide users with the opportunity to make the best use of the Internet, but the website permitted perpetrators to violate personal privacy and rights and turned a blind eye to the Turkish legal system. The statement also claimed the attitude adopted by Twitter not only harms its reputation but it also portrays a false and unjust image of Turkey.

Turkey's Minister of Transport, Maritime Affairs and Communications Lütfi Elvan said Twitter took a positive step by closing down the account in accordance with the court ruling and suggested the micro-blogging site should continue to meet with Turkish authorities in order to reach a final solution. President Abdullah Gül also commented on the closure at Esenboğa Airport before he took off for the Nuclear Security Summit in the Netherlands. "Twitter is supposedly closed, but the number of Turkish users doubled in the process as you can see" said Gül, who pointed out it is crucial to resolve such matters with communications giants through healthy debate and discussions. The president also noted that Turkey is a developed country on the brink of entering the European Union and will be able to resolve the matter in no time. The Minister of Health Mehmet Müezzinoğlu said the closure was reaching its goal to encourage Twitter to abide by Turkish laws and has brought Twitter "to its knees."

Among those who criticized the blocking of access to Twitter was Kemal Kılıçdaroğlu, the leader of the Republican People's Party (CHP), the main opposition party in Turkey. At his recent local elections campaign rally in İzmir, Kılıçdaroğlu criticized the prime minister for fearing "140 characters" and strongly opposed the closure,citing it as an authoritarian measure, even though in 2009 he filed a lawsuit against Facebook for attacking his personal rights due to a page alleging that Kılıçdaroğlu was a Kurdistan Workers' Party (PKK) supporter.

Kılıçdaroğlu had requested the page's suspension and said if that was not possible, access to Facebook should be blocked. His request was refused by the TİB on the grounds that it was not a "catalogue crime." When blamed for attempting to close down Facebook, Kılıçdaroğlu said he only demanded the removal of offensive content, but his lawyer Mutluhan Karagözoğlu corrected his statement, saying that they requested the closure of Facebook if the group's page was not removed, similar to the action that was taken against YouTube in 2010.

Twitter is not only criticized for refusing to abide by Turkish laws but also for not paying taxes in the country even though it generates large sums of profits from ads. In 2010, the company acquired $45 million (TL 100.5 million) in profits from ads in Turkey, while in 2013, this number jumped to $400 million. Currently, users are able to access the website through the use of different techniques but the website is still blocked on paper. Turkish officials are hopeful that they will reach a resolution and encourage Twitter to open a headquarters in Turkey