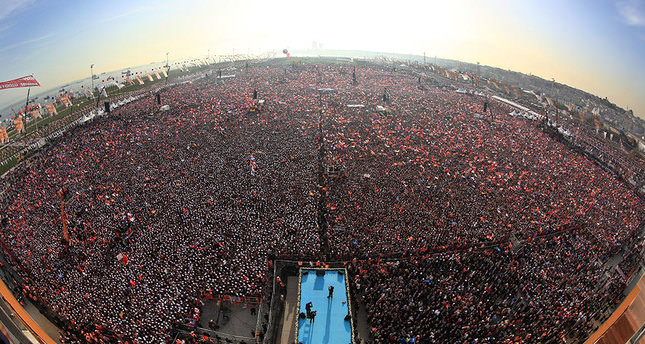 After two million citizens gathered for Turkish Prime Minister Erdoğan's Istanbul election rally, Daily Sabah spoke with academics on the political motives of the AK Party ahead of the local elections

ISTANBUL — With less than one week left before Turkey's local elections, the mayoral races are heating up. Turkey is witnessing a tight election race and a realigning of political alliances of the likes never before seen. Despite last year's nationwide Gezi Park protests and the Dec. 17 operations carried out by the Gülen Movement aimed at discrediting the ruling Justice and Development Party (AK Party) and Turkish Prime Minister Recep Tayyip Erdoğan, Turkey's voters appear to be reacting to the propaganda differently than was expected by most.

Voters' reactions have raised the question of how they perceive the ongoing election process and the stance adopted by Prime MInister Erdoğan. Turkey's experts in sociology, political science and communications answered Daily Sabah's questions on Erdoğan's Istanbul election rally held on Sunday, attended by nearly two million that gathered to support the AK Party for the upcoming local elections.

On the continuing support for Erdoğan in the country despite the ongoing operations to discredit the government, Levent Baştürk, an academic at Eskişehir Osmangazi University, said: "In terms of internal politics, social memory remembers the country's past. That's why the AK Party and the prime minister have been praised for today's political mentality and municipality approach. He did not meet all the expectations of voters in terms of the economy, but the opposition parties still do not have the upper hand against the AK Party."

Commenting in regard to events in the region, Baştürk said, "If we consider the developments in Ukraine, Egypt and the region, the Dec. 17 operations and Gezi Park protests left a question mark on the citizens' minds and led them to reinforce their trust in the AK Party. They chiefly react to protect Turkey. Erdoğan's firm stance against those operations increased the people's support for him."

Describing Erdoğan's positive effect on his voters as a risk for the AK Party to a certain extent, Baştürk said, "Erdoğan's political charisma is an obstacle for the institutionalism of the AK Party since there is an acceptance that Erdoğan equals the AK Party. It is believed that if Erdoğan retires from politics, there will be no AK Party."

Baştürk said, "It can be said that the animosity against Erdoğan is more than the ideologies that parties adopted in Turkey."

Hikmet Kırık, an academic in Istanbul University's political science department, associated Erdoğan's political charisma with his firm stance. He said: "In its own perspective, the AK Party practices an effective strategy. Apart from Erdoğan's firm stance, the strategy can be related to the effective communication techniques he uses. Traditional values are of the utmost importance to Turkish citizens, and the AK Party's election strategy is established based on this."

Sociologist Mustafa Şen, the head of GENAR research institution, offered an evaluation of Erdoğan's Istanbul rally and said Erdoğan's political charisma stems from Erdoğan's self-confidence, management capabilities and communication competence. Şen states, "These three reasons increase both Erdoğan's persuasiveness and credibility. He can reach out to each level of society in terms of politics and has a good grasp of ongoing issues in the economy, society and politics."

He added that apart from Erdoğan's stance,society in Turkey is in a state of flux and said: "Society is not being able to be manipulated by the engineers in politics anymore. The citizens do not let those bodies orient their own approach."

On the effects of the Dec. 17 operation and ongoing moves to discredit the government, Nurullah Ardıç, an academic at Istanbul Şehir University's Department of Sociology, said, "Most voters are not sure about the main aim of those operations. The timing of the simultaneous operations caused suspicion. The AK Party appears to have swept the lower-class support for the past 12 years."

He added that Turkey's citizens remember the poverty, corruption and economic instabilities of the 1990s. When they compare that era to today, they prefer having stability in the country.