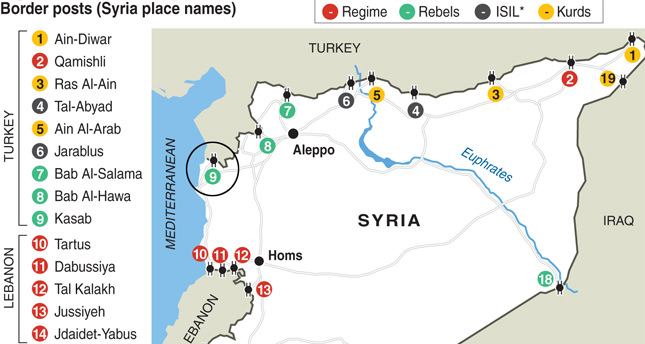 ISTANBUL — Tension between Turkey and Syria ramped up after Turkey shot down a Syrian Air Force war plane Sunday upon the aircraft's violation of Turkish airspace.

The Syrian jet was shot down by the Turkish Air Force at around 1:00 p.m. Sunday near the Syrian town of Kasab, across the border from Hatay. Both Foreign Minister Ahmet Davutoğlu and the Turkish military issued stern warnings against any Syrian violation of Turkish territory, including the tomb of Suleiman Shah, which is located within Syria.

This is the second Syrian aircraft Turkey has destroyed in seven months within the rules of engagement, which were updated after a Turkish F-4 was shot down by Syria in June 2012. Turkish F-16s took down a Syrian helicopter with air missiles in September 2013.

Sources say the aircraft was shot down on Sunday by F-16s belonging to the 181th Fleet of Diyarbakır (Pars Fleet).

In his statement, President Abdullah Gül said: "With regard to the recent threating developments in Syria, the Turkish Armed Forces are on alert on land, sea and air. Our armed forces responsible for protecting Turkish borders have carried out their task. If conditions had been normal, Turkey would have responded accordingly. However, we have previously declared that the rules of engagement would be implemented. Turkey, therefore, did what was necessary."

In addition to the downed jet, the General Staff of the Turkish Armed Forces accused Syria of using its missile system to lock on and harass an F-16 on patrol. "An F-16 war craft on patrol over Hatay was harassed by a SA-5 missile system in Syria for nearly four minutes and 30 seconds by keeping the radar lock on," the office said in a statement. "In any case, Syria's action should be considered as a violation," said Turkish Foreign Minister Ahmet Davutoğlu.

"Turkey cannot overlook this violation. The Syrian jet flew approximately one kilometer into Turkish airspace. We have strong evidence to prove our allegation. The Turkish General Staff has taken all necessary steps…The Republic of Turkey has the power to protect its borders. Anyone violating Turkish borders over land, sea or air will face our response," stated Davutoğlu.


The Foreign Minister reiterated Turkey's determination to secure its borders. "Do you think we made an invitation to the Syrian air forces to violate our borders?" asked Davutoğlu. "Turkey cannot overlook this attempt even if the local elections will be held in a few days."

Davutoğlu discussed the developments with U.N. General Secretary Ban-Ki moon and NATO Secretary General Anders Fogh Rasmussen after the Syrian jet was shot down. "NATO is on Turkey's side," said the foreign minister. "I hope that Syria will not dare to violate our borders again. Turkey always supports peace, which requires determination. The Syrian jet was shot down pursuant to the rules of engagement."

Davutoğlu denied allegations by some media channels that the downing of the jet was orchestrated for national political reasons. "We regret the statements of the CHP [Republican People's Party]. Nobody should question Turkey's determination. It is frivolous to reflect this intervention as an election campaign. There are media channels displaying Turkey as a pro-terror country. It is a short-sighted and malicious attitude and a betrayal to relate Turkey's intervention to the upcoming local elections. This is also against our principles."

He vowed to act again should Turkey's airspace be violated. "If necessary, any Syrian jets will be shot down again," he promised. "Some media channels act like the spokesman for the Syrian regime. No matter what the reason behind Syria's attempt, Turkey will respond to any violation. This news does not comply with the concept of loyalty to a nation."

Davutoğlu said the accusations were unacceptable and that at a time like this, Turks should unite instead of focusing on political disagreements.

Davutoğlu said that a crisis desk has been set up for the Turkish police around Suleiman Shah's tomb located within a Turkish enclave in Syria, which has been surrounded by the Islamic State of Iraq and the Levant (ISIL). "With respect to the recent security concerns around the tomb of Suleiman Shah, the Turkish Armed Forces and its affiliated units have taken necessary measures," Davutoğlu said. "Turkey may have to face possible security risks at any moment.

The Turkish government should take all risks into account and be ready for all possible scenarios. We want to inform the Syrian regime and other groups that anyone will bear the consequences of any unacceptable attempts or violations of Turkish land. The protection of Turkish soldiers in Syria equals to the protection of our 75 million citizens. The current situation is now stable and there is no recent intervention."

Meanwhile, several mortar shells dropped on Turkey's Yayladağı region close to the Syrian border yesterday as a result of clashes between the Syrian opposition and regime forces for control of a town close to the border. The shells were reportedly fired from the Syrian town of Kasab, seized by the opposition armed group Free Syrian Army (FSA) on Saturday, but which regime forces are trying to recapture. The three mortar shells were dropped on the Yayladağı district of the Hatay province.

At least nine people were killed and 30 others injured during an attack on an aid distribution center in besieged Yarmouk on Sunday in the capital city of Syria, Damascus, an activist said.

Local activist Rami al-Sayed told the Anadolu Agency (AA) that the regime forces organized the attack and the dead included women and children. He also stated many of the injured are in a critical condition and they are worried about the death toll rising. "Conditions in Yarmouk are getting worse day by day. The local community wants the siege lifted, instead of aid," he added.

The civil war, which entered its fourth year last week, has claimed more than 140,000 lives, according to the London-based Syrian Network for Human Rights (SNHR).

Opposition leader: Turkey was only protecting its territory

Speaking to Daily Sabah Ahmed Jakal, a member of the National Coalition for Syrian Revolutionary and Opposition Forces said: Turkey did this in order to protect its areas of sovereignty.

"Turkmens in Bayır-Bucak and Latakia escaped from the pressures and massacres by supporters of the regime and took refuge in Turkey 12 months ago. Today, there are nearly 100,000 Turkmens in Turkey in camps or living with their relatives, many being Bayır-Bucak Turkmens. Four days ago, Arabs and Turkmens started a joint operation in the Turkmen mountains and many areas and villages belonging to the al-Assad powers, causing great distress, were seized. The Turkmen brigades led an operation that killed Hilal Assad, the cousin of Syrian President Bashar Assad, and Mihraç Ural from Hatay, who he alleges planned bombings in Reyhanlı and executed the Bayda and Metras massacres.

Thanks to this operation, 60 percent of our soil was returned. The Syrian Air Force's MiG war craft, which was trying to attack Turkmen brigades, crossed over the Turkish border in order to maneuver through the area. Although Turkey warned the plane to turn back four times, it continued on its course and was shot down."