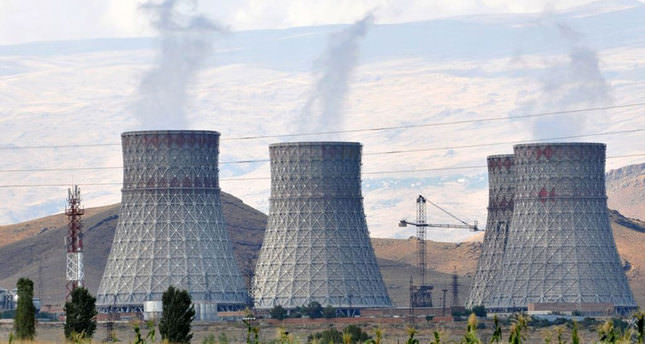 ANKARA — Turkey will officially call for the closure of Armenia's Metsamor Nuclear Power Plant according to sources in Ankara. The Metsamor plant, which has been described by authorities as one of the oldest and least reliable nuclear plants in the world, is only 16 kilometers away from the Turkish-Armenian border.

Last Friday, Turkey's Energy Minister Taner Yıldız revoiced concerns about the nuclear plant and remarked that the Metsamor plant is outdated and should be shut down as soon as possible. During his visit to the eastern province of Iğdır along the Armenian border, Minister Yıldız stated that Turkey had sent an official appeal to the International Atomic Energy Agency (IAEA) concerning the shutdown of the plant. "The nuclear plant, which was put on line in 1980, has had a lifespan of 30 years. This plant has expired and should be immediately closed," Yıldız added.

Furthermore, according to sources in Ankara, President Abdullah Gül will bring up this issue during his visit to the Netherlands to attend the Nuclear Security Summit (NSS). In his speech, Gül will primarily focus on Turkey's nuclear security policies but the closure of the Metsamor plant will also be on President Gül's agenda during the bilateral meetings.

The 2014 NSS will be held in The Hague, the Netherlands, on March 24-25, 2014. It will be the third edition of the conference and 58 world leaders are expected to be in attendance. The conference has three main objectives: reducing the amount of dangerous nuclear material in the world, improving the security of all nuclear material and radioactive sources, and improving international cooperation in the field of nuclear energy.

A possible immediate shutdown of the Metsamor nuclear power station, which is located in a seismically active zone and has been described as the "Armenian Chernobyl" by world media and experts, has repeatedly been raised by the Europen Union (EU), Council of Europe (COE) and the U.S. Following the Spitak earthquake in 1988, Metsamor was shut down. However, in spite of widespread international protests, it was put back into operation in 1995. Armenia turned down the EU's call for Metsamor to be shut down by 2011 at the latest and its offer of 200 million euros (TL 615 million) to help meet the country's energy needs.

In the event of a major incident at Metsamor, the effects would inevitably be felt in Armenia, Turkey, Georgia, Azerbaycan, as well as countries in the Near and Middle East. In the worst case scenario, not only the region but also large parts of Europe would be affected.

While the official lifespan of Metsamor expired in 2010, Armenian and IAEA experts have agreed that the plant can remain operational until 2016. The authorities in Yerevan formally agreed in 2007 to close the Metsamor plant after several years of pressure from the U.S. and EU, which claim it to be inherently unsafe and are promoting the idea of building a brand new facility.

Meanwhile, Armenia's President Serzh Sarkisian recently signed an agreement with Russia's state nuclear agency Rosatom to assist in renovating the facility. Moreover, Armenia's Energy Minister Armen Movsisyan told journalists that Metsamor, originally scheduled for decommissioning in 2016, "will operate until 2026." Armenian authorities say that the plant has undergone considerable renovations over the past decade and has been declared fit for operations by the IAEA.