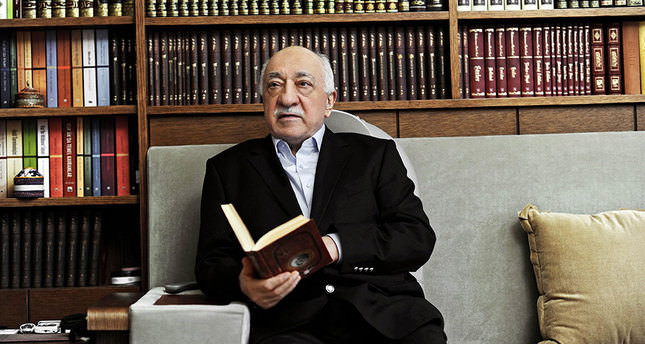 The ruling AK Party, competing against legitimate secularist and nationalist political rivals, also has to contend with the Gülen Movement that aims to shape Turkey into its undemocratic image

ANKARA — As Turkey's incumbent AK Party faces secularist and nationalist rivals in the country's upcoming local elections, it is contending with an 'invisible' opposition in the shape of the Gülen Movement which is openly attempting to shape the next government.
The Gülen movement, led by self-exiled, U.S.-based, controversial imam Fethullah Gülen -- an erstwhile supporter of the AK party -- has turned towards the country's main opposition parties to garner support in an attempt to unseat Prime Minister Recep Tayyip Erdoğan.

Gülen, in a recent interview with Turkish daily Zaman, said: "Asking Gülenists to vote for a certain party is a type of pressure," but the paper noted that "Gülen signaled, however, that his supporters would not be voting for the ruling Justice and Development Party (AK Party), whose chairman, Erdoğan, constantly throws around insults."

This is the first time since Turkey's high-profile anti-corruption probe began on 17 December that Gülen has given a comprehensive interview in Turkey. He has been quoted as saying "everyone spoke, but he [Gülen] kept quiet, and now he will speak."

Gülen has been more active in the Western media recently, both by publishing articles -- his recent one being last week in the Financial Times and giving interviews. Last month he gave an interview to the BBC on the current debate between Erdoğan and the Gülen movement. However, he rarely speaks to a Turkish audience.

Erdoğan often challenges Gülen and his movement to form a politically recognizable body, saying at election rallies: "If you [Gülen] want to make politics, come up with a party."

Mustafa Yeşil, president of the Journalists and Writers Foundation in Istanbul who is affiliated with the movement, described the Gülenists as a "civic movement" with no political aspirations.

Yet, on Tuesday, Ahmet T. Kuru, a political scientist at San Diego University who writes books favoring the Gülen movement, published an article in Today's Zaman, headlined: "Why one should not vote for the AKP," which guides the Gülen movement's political position in the upcoming election.

Kuru called on Turkish voters "not to vote for the AKP" asking those "who are concerned about democracy" to vote for any opposition to the AK Party. He urges voters to "support the strongest alternative candidate in order to avoid the tyranny of AKP's majority."

In this regard, Gülenists readily admit that it seems their political position appears to be primarily anti-AK party; they will back whoever becomes the strongest opposition.

Indeed, the movement does not really point to any political party but merely to any group other than the AK Party.

Yet, Kuru predicts that the Nationalist Movement Party (MHP), and the secularist Republican People's Party (CHP) will take votes from the AK party.

Kuru suggests that the MHP is moving towards the center-right in order to garner more conservative votes as an alternative to the AK Party while suggesting that the CHP has changed from their previously assertive secularist ideology to a passive secularism.
Erdoğan claims that the Gülen movement is nestled in the judiciary and police, famously calling it a "parallel government."

The Istanbul-based Dec. 17 operation orchestrated by Gülen Movement, which led to the arrest of dozens of high-profile bureaucrats, politicians and businessmen -- including the sons of two former cabinet ministers and the head of state-owned lender Halkbank -- is seen by Erdoğan as a Gülen-backed coup to topple his government.

Erdoğan claims that the operation is a plot with international links aimed at weakening Turkey's economic development.

However, Gülen refutes these claims saying that "those who have not even harmed ants are now being accused of coming up with a secret organization or a parallel state." "The Gülen movement proliferated within the police and the judiciary, works behind the scenes to become one of Turkey's most powerful political forces," runs a quote in the New York Times from Turkish journalist and political analyst Ahmet Sik's book, "The Army of the Imam." "If you touch them you get burned," (referring to the Gülen movement) a gaunt and defiant Sik yelled while he was detained in March 2011 in front of his Istanbul apartment on charges of being linked to an "illegal organization." The draft of his book was also given as a reason for his arrest. After being released from jail more than a year later, he noted: "Whether you are a journalist, an intellectual or a human rights activist, if you dare to criticize them you are accused of being a drug dealer or a terrorist."

Yasin Aktay, a sociologist from Yildirim Beyazit University in Ankara and deputy chairman of the AK Party says: "The movement makes temporary marriages with the CHP and MHP in order to maintain its power, and is ready to ignore the will of the people." "The pace of the coalition between the Gülen movement and other political parties has been too fast; even the members of the movement are not able to keep up with the change," Aktay added.

On Monday, Turkish sociologist Fahrettin Altun wrote in his column in the Aksam daily that "while the Gülen movement displays itself as open to society, moderate, transparent and peaceful, we saw a movement with a massive hierarchy, totalitarian with a secret structure."

While Turkish opposition groups have had 10 years to develop a strong political discourse against Erdoğan's government, it seems the Gülen movement continues to play an essential role in gathering opposition groups on one point being against the AK Party government.

Alphonso Lingis, a professor emeritus of philosophy at Pennsylvania State University, the U.S., describes groups who only share one thing as being "the community of those who have nothing in common" perhaps an apt description for those opposed to the AK Party.