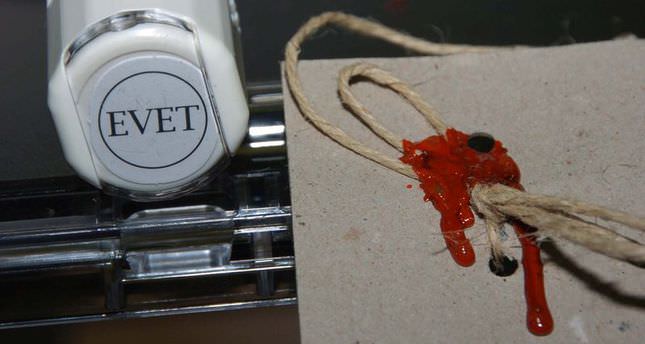 by Ragıp Soylu Mar 25, 2014 12:00 am
An analyst with extensive knowledge of voting polls said necessary precautions were taken to ensure the security of the upcoming local elections set for March 30. Various members from the opposition raised their concerns last week and ordered their associates to keep an eye on the critical ballot boxes in leading cities, including Istanbul and Ankara, the capital.

In a first in modern history, the ruling party also expressed its worries on the security of the polls. AK Party Deputy Chairman Süleyman Soylu said his party is feeling anxious over the Supreme Election Board's attitude regarding election day, implying Gülenist judges' partial control in the body. The elections will be a turning point for the apparent struggle between the Gülen Movement, led by U.S.-based controversial imam Fethullah Gülen, and Prime Minister Recep Tayyip Erdoğan's government.

Erdoğan declared local elections will be considered a referendum on his rule after last year's Dec. 17 operation targeted three former ministers and businessmen close to the ruling party, creating political instability within the state. Erdoğan accuses Gülenist police officers and judges of conspiring to overthrow the government with a corruption operation.

Erol Tuncer, chairman of the Social, Economic and Political Research Foundation (TESAV), said the current election law and Supreme Election Board (YSK), which consists of top judges, has taken all necessary measures against fraud. "The law number 298 is providing every measure [needed] to provide essential security for elections. Ballot boxes will be watched by the representatives of the five largest parties in every city. Hence the law mandates that without the representatives, no vote may be counted. Parties can obtain final official records from the local election boards and compare them with their lists. Political parties are involved in every step of the process."

Tuncer pointed out that the latest election amendments in 2010 added extra protections against cheating and stated, "Parties will follow the online records instantly on YSK's website and can make an objection if they find an inconsistency or misapplication."

The Liberal Democrat Party (LDP) filed a petition in early March to the YSK asking to see PDF versions of officially signed hard copy records instantly on the body's official website in the upcoming elections. The YSK welcomed the application in its statement two weeks ago and announced hard copies would be available online as soon as possible on election night. This move will also prevent online fraud allegations.

Turkey, which is believed to have enjoyed free, fair and transparent elections since 1950, is a member of the Organization for Security and Cooperation in Europe (OSCE), a multinational body observing Turkish parliamentary polls for years. OSCE's 2011 report on elections said Turkey's polling procedures "were administrated professionally, efficiently and in overall compliance with legal requirements." OSCE explained that "the existence of a solid framework and of the experience in the conduct of democratic elections is clear [in Turkey]."

At least two independent nongovernmental organizations will be watching the ballot boxes with their volunteers in this election. Oy ve Ötesi (Vote and Beyond) is planning to follow Istanbul's districts with over 30,000 observers and Sandık Başındayız (Off the Ballot) has carried out a campaign focusing on ballot security with training in multiple cities and will be deploying "witnesses" to man polling stations around the country.

Governors will be responsible for ensuring safety through pre-planned cautionary measures and will seek assistance and coordination from bordering provinces if deemed necessary. Individuals and groups who try to provoke the public and stir violence in efforts to disrupt peace and order will be dealt with and intensive intelligence measures will be taken to prevent unlawful protests and demonstrations on the streets, in bus stops and transport stations. The security and gendarmerie forces will act in coordination with other institutions for a safe environment. On the other hand, international election observers will be welcomed accordingly and will be provided a safe environment to conduct their efforts.