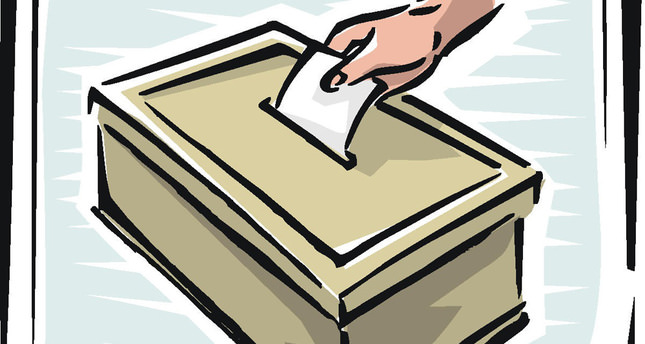 by daily sabah Mar 26, 2014 12:00 am
As the countdown to Sunday's local elections begins, one of the most discussed issues is ensuring the integrity of the ballot box in an effort to prevent agents of the Gülen Movement from attempts at altering the results of the elections as has been alleged by various people. Prime Minister Recep Tayyip Erdoğan in his campaign rallies has repeatedly highlighted the importance of looking after the ballot boxes and encouraged people to sign up as ballot box observers. Procedures regarding voting, the counting of ballots and the announcement of the results under the framework of the law, regulations and public mandates are as follows:

1. Safety starts at the ballot box: The Supreme Election Board (YSK) will consist of five party representatives receiving the highest number of votes in the designated region along with two public servants. The board will oversee the assurance of order during the voting process, the counting of votes and issuing official reports.

2. Ballot box observers: Each party will be able to assign an observer at the ballot box. These observers will watch the voting and tally procedures and check to see if the votes are fairly counted. They will also observe if the party votes are reported in a proper manner.

3. District election boards: The district election boards will be established with a senior judge of the district, along with two public officials who have served over ten years and representatives from four parties which have gained the highest number of votes in the last general elections. Here too, political parties may assign observers. These boards are significant to ensure integrity.

4. Parties to be represented at the YSK: Four representatives from parties receiving the highest number of votes in the last general elections will be able to participate at the YSK. This will allow parties to closely watch election results and raise objections when necessary.

5. Ballot box areas: Nobody will be permitted to stay around the ballot boxes except for the officials specifically assigned to that duty. Those who try to use violence, force or menace will be warned and warded off by officials and police. The display of political parties or candidates through an emblem, pins or other tools around ballot boxes will be prohibited, along with written, oral or verbal propaganda.

6. Phone ban: Voters will be prohibited from entering the ballot box booths with cellphones, cameras or recording devices. This is done to prevent bribing people to vote for a specific party.

7. Votes to be counted three times: In order to document votes in a correct and complete manner, a mechanism has been established where the ballot will be tallied twice. If the figures are inconsistent, a third count will be conducted.

8. Official reports: A number of steps have been taken to avoid speculations about the results. Under this scope, a certified copy of the official report will be posted in a designated area around the ballot box, while a copy will be given to representatives of political parties and independent candidates. This will allow political parties to compare their results to the ones published on YSK's website and object the results when necessary.

10. Broadcasting of results: Parties will be able to track the results live at their headquarters.