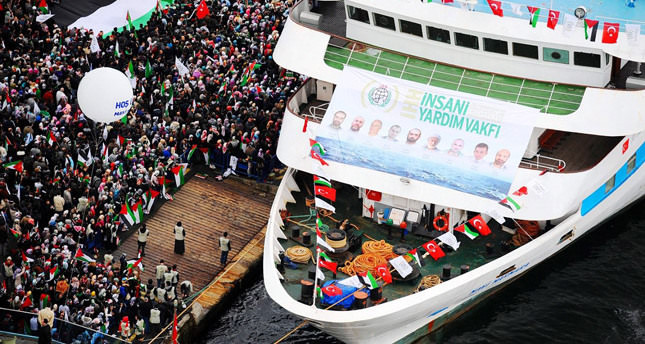 ANKARA — While relations between the two countries started to normalize after Israeli Prime Minister Benjamin Netanyahu called Prime Minister Recep Tayyip Erdoğan and apologized for the incident, bilateral relations were blocked without the payment of reparations by Israel and the lifting of the siege of Gaza. Bilateral talks were initiated by the Undersecretary of Turkey's Minister of Foreign Affairs Feridun Sinirlioğlu in April 2013. The two sides met in Istanbul in December and agreed on fundamental principles.

Arınç noted that the latest consensus was reached last month with Israel. "But we are busy during this process, as are they," said Arınç, who explained both states will focus on reaching a binding legal resolution on the payment of reparations following Turkey's local elections that will be held on March 30. The official document will then be sent to the Turkish Grand National Assembly (TBMM) for approval.

Previously, Israel refused to agree to the reparations requested by the Turkish side. Israeli news sources claim the total amount Israel will pay is projected at $20 million, whereas the Ministry of Foreign Affairs sources claim the amount will reach about $21 million. Currently, final modifications are being made to the agreement text and Turkey made no concessions to the amount they deemed appropriate and rightful. Foreign Affairs sources also said Turkey took into consideration international norms and regulations in the process and aimed for a just resolution. Officials claimed the agreement was multidimensional and the reparations were only a single aspect of the agreement.

Under the scope of the agreement to be signed between Turkey and Israel, the lifting of the siege on Gaza will also be guaranteed. Turkey will be exclusively authorized to send humanitarian aid supplies to Palestine and Gaza. Turkey will send an ambassador to Tel Aviv following the ratification of the agreement and the ambassador will be responsible for coordinating the delivery of humanitarian aid supplies.

Officials pointed out Turkey does not recognize the embargo, and the closure of the Rafah border exacerbated the humanitarian crisis in Gaza. The agreement sets forth the establishment of an order to permit Turkey to send humanitarian assistance to Gaza at its own discretion and the appointment of an ambassador to establish this order.

Relations between Turkey and Israel became strained following the storming of the Mavi Marmara, a humanitarian aid ship carrying supplies to Gaza in international waters as part of the Gaza Freedom Flotilla. Israeli soldiers killed nine unarmed Turkish activists and injured many.

The attack was widely criticized by various countries and international organizations. The United States played a significant role in the reconciliation process between Turkey and Israel, according to Arınç. "Prime Minister Netanyahu told President Barack Obama during his visit to Israel last year in March that he would accept the conditions set by Turkey," said Arınç. Arınç asserted the current state of events is a direct result of diplomacy and the American president played a significant role in the process by encouraging reconciliation, which resulted in the official apology by Netanyahu and paved the way for reconciliation talks.

Turkey consistently emphasized the significance of lifting the siege on Gaza due to the significant humanitarian crisis. There is a serious destruction of the infrastructure and basic social services, preventing people from carrying on their everyday lives. The International Red Cross termed the crisis "intolerable" and a "full blown humanitarian crisis" with over 1.7 million Palestinians confined to the Gaza strip and cut off from the outside world.