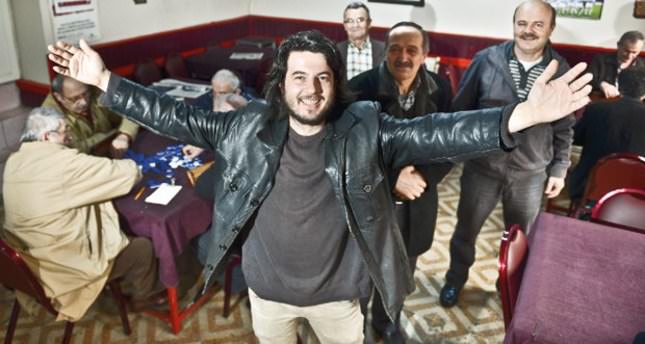 by Elif Merve Yediyıldız Mar 28, 2014 12:00 am
ISTANBUL – Local elections also bring out light moments, thanks to various candidates for local governance across Turkey, despite political tension. As the March 30 local elections approach, candidates running for various positions, from mayor to village headman, are now working against the clock to rope in the most votes.

Although the atmosphere is tense, with political parties' rallies during which the speeches are dominated mostly by brickbats, local elections have also witnessed interesting campaigns by various candidates.

One colorful "alternative" candidate is Şafak Tanrıverdi. A young Istanbulite, Tanrıverdi is now up for Istanbul mayor as an independent candidate. He attracts attention from many with his fantastic mayoral promises. Declaring he would demolish a municipality building, Tanrıverdi says it would not be needed since he will work from his home if elected. Tanrıverdi also challenged other candidates with his slogan, "Vision: 1963," by which he means to turn Istanbul back 50 years. "Retro is our thing," Tanrıverdi says.

Basing his campaign on religion, Halis Bali, who is running for headman in the village of Donatım in the east Turkish province Muş, promises free hajj travel to the holy site in Saudi Arabia for his voters. As a man of reason as well as religion, Bali explains his plans as an answer to increased concerns regarding the budget. Over the next five years, he says he will send 10 of his voters to hajj, and his campaign's polling found 20 percent of the voters would cast their ballots for him, as stated in his interview with İlkha news agency.

Another candidate running for village headman with an out-of-the-box campaign, is running in Orhangazi, Bursa. Campaigning in the Tekke neighborhood, Selahattin Şimşek is appreciated mostly for his enthusiasm. Covering his minivan with his election slogan (a form of onomatopoeia that perfectly rhymes with his first name) "Tin tin tin Selahattin," Şimşek drives with a speaker attached to the top of his vehicle, announcing his candidacy and asking for votes with his pun catchphrase, "Başın düşerse dara, Muhtar Selahattin'i ara!" (roughly translated: "If you ever get in trouble, call Headman Selahattin").

Cevat Naci Seçkin is another candidate running for headman in the Zeybek neighborhood of Fatih, one of Istanbul's oldest districts in historical peninsula. He decorated his candidacy poster with the Rabaa symbol the four-finger gesture popularized after the dispersal of a pro-Mohammed Morsi who was ousted after a military coup in July 2013, sitin at a mosque in Cairo called Rabaa. Seçkin emphasizes his global perspective and passion for rights and freedoms as the reasons for his ability to provide local governance. Reflecting his global activism, Seçkin bases his campaign on fighting against poverty by promising to distribute his entire salary to people in need. He also warns his future supporters to refrain from voting for candidates who have sympathy for Syrian President Bashar Assad, Ergenekon case suspects and Gezi Park vandals.

Global activism has a place on another candidate's campaign banner. Haydar Aktürk, headman candidate for the Gebeli neighborhood in the southern district of Osmaniye, challenges his rivals with the slogan: "Ne sağcıyız, ne solcu Haydarcıyız Haydarcı" (roughly translated: "Not leftists, not rightists, we are all Haydar-ists"). Aktürk also gives his voters the unique opportunity to start a new ideology based on him, which could be considered refreshing by some.
Last Update: Mar 29, 2014 9:07 am
RELATED TOPICS