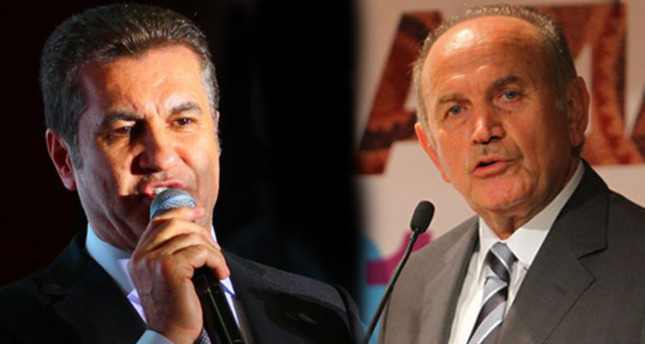 by Sena Alkan Mar 29, 2014 12:00 am
ISTANBUL – The countdown to Sunday's local elections is well underway and residents of Turkey's largest city Istanbul, which is known as the economic and cultural heart of the country, are preparing to head to the ballot box to decide whether AK Party incumbent Kadir Topbaş will get another five years in office or CHP candidate Mustafa Sarıgül will take his place.

With all the rhetoric from candidates, Istanbulites are mostly interested in the projects candidates have proposed to upgrade their cities since they once suffered from a lack of adequate transportation infrastructure, water shortages and numerous other unplanned complications.

Daily Sabah compared the two candidates' track records and pledges ahead of the weekend polls. Serving as mayor of Istanbul metropolitan municipality for 10 years and prior to that, as Istanbul Beyoğlu district mayor, Topbaş appears to know the problems of the entire city better than Sarıgül, who has 15 years experience as the Beyoğlu district mayor.

One of the most well received services under Topbaş in Istanbul are transportation projects that gained new momentum in recent years.

Topbaş pledged to solve Istanbulites' transportation issues when he was elected and allocated $32.3 billion (TL 70.5) to improving transportation. In addition to upgraded tunnels, junctions, roads for road transport and ferries, ports for sea transportation, the municipality introduced Bus-Rapid Transportation System (BRTS) during Topbaş's mayoral period. The railway tunnel under the Bosphorus, which connects the two sides of the sea, is another innovative move of the municipality to relieve the city's persistent traffic jams. Water pollution in the major inlet of the Bosphorus, the Golden Horn, was cleaned up with an investments of $733 million. The district, which suffered from pollution was able to turn into an attractive destination again. Using a biological treatment system, the city's water supply network has been renovated with about 160 km of Istanbul's coastline - 234 km in total - cleaned. In addition to massive projects in Istanbul, including a third airport, third bridge, Kanal Istanbul (artificial sea-level waterway project announced by Turkish Prime Minister Recep Tayyip Erdoğan), the telpher over the Bosphorus to connect both sides of the city, a massive city park project to be used for culture and sports facilities, the Melen dam to provide fresh water for Istanbul, two forested areas on the Asian and European sides, and the extension of metro lines were introduced by Topbaş. A monorail project and two large-scale natural habitats for animals were also pledged by the Istanbul mayor for the upcoming mayoral term. A nursing and rehabilitation center in each district of Istanbul for disabled children was also announced. Recently, he announced that an underwater tunnel for traffic across the Golden Horn will be constructed and the bridge currently in place will be demolished.

Pledging to improve the landscape, Sarıgül renovated Şişli's taxi stands, roads and buildings to ensure urban transformation. He also provided free potable water for the poor neighborhoods of Şişli. Even though his services are praised by the richer neighborhoods of the Şişli district, the poorer ones complain that they have not benefited from urban planning and permanent solutions to their problems such as waste collection, transportation. After his nomination, Sarıgül made a number of campaign promises and stated that his priority would be to gradually solve Istanbul's transportation problem by expanding the city's rail system. He pledged to build two massive city parks, uninterrupted bicycle and pedestrian roads, six large-scale town squares, three culture centers. Claiming that he would introduce projects to boost Istanbul's touristic attractions, Sarıgül touched on cultural and social facilities instead of the infrastructure projects in Istanbul such as bridges, tunnels and airports. In regard to the third airport project in Istanbul, Sarıgül said that he was not against building a third airport, but against the localization of the airport. Sarıgül also pledged to build social centers in each district and two massive natural habitats for animals on the Asian and European sides.
Last Update: Mar 30, 2014 8:16 pm
RELATED TOPICS