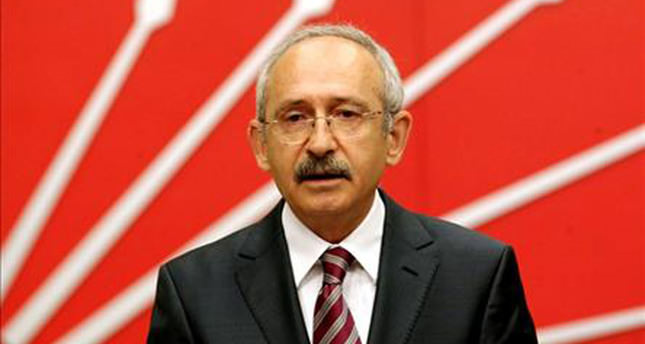 The main opposition CHP, which exploited the Gülen Movement's attacks on the ruling AK Party to win in the elections, disappoints supporters with election loss

ANKARA — The March 30 local elections witnessed another landslide victory for Turkey's ruling AK Party, which saw a 7 percent increase in its electoral support from local elections five years ago. The main opposition Republican People's Party (CHP) remained just shy of 28 percent on election day to raise questions about whether the party has what it takes to challenge the government.

In the face of growing criticism about poor performance from the main opposition CHP, party Chairman Kemal Kılıçdaroğlu argued that the elections results did not mean his party was unsuccessful. Evaluating the March 30 elections at a press conference on Monday, Kılıçdaroğlu claimed that the main opposition party added to its votes in metropolitan municipalities and that the party was stronger than ever and warning opponents that this was just the beginning.

Evaluating the March 30 elections at a press conference on Monday, Kılıçdaroğlu claimed that the main opposition party added to its votes in metropolitan municipalities and that the party was stronger than ever and warning opponents that this was just the beginning. In response to allegations that he considered resigning from his post due to poor results, Kılıçdaroğlu ruled out such a possibility and argued that Prime Minister Recep Tayyip Erdoğan should be the one considering resignation. The main opposition leader also accused the Turkish prime minister of plotting to control opposition parties while stating that Erdoğan did not possess the necessary power to manipulate the CHP.

Prior to the local elections, political observers pointed out that the main opposition party may consider an alliance with the Gülen Movement, a U.S.-based group led by controversial imam Fettullah Gülen, for additional ammunition against the AK Party government. Consequently, a number of CHP figures, as well as outside observers, criticized the party leadership for leading the Republicans down a dangerous path.

On Monday, Kılıçdaroğlu denied allegations that his party joined forces with the Gülen Movement for the elections and argued that the government had spread baseless claims during the campaign season. "If the government has necessary evidence to support their claims, they should provide documents and information to the public," the main opposition leader commented.

Meanwhile, Mustafa Sarıgül, who provided a written statement to the press following an unsuccessful bid as the CHP candidate for Istanbul mayor, maintained that the elections had shown once again that engendering and consolidating genuine democracy in Turkey would prove to be a challenging journey. "We have to continue this journey for our children in an effort to allow them to live in modern Turkey," Sarıgül said, which some observers argued hinted at the former Şişli mayor's intentions to challenge Kemal Kılıçdaroğlu for CHP leadership.

Devrim Çelik, a political commentator who played an active role in the CHP's successful electoral campaign in İzmir, argued that "even though Kılıçdaroğlu might view the election results as a success story and sees no reason to resign from his position, I believe that Mustafa Sarıgül - who has expressed his interest to serve as prime minister in the future - will consider running for CHP chairman at the right time. He may have increased the party's voter base in Istanbul, which understandably gives him the necessary confidence to consider a leadership bid, but this might not happen in the foreseeable future."

However, according to journalist Murat Aksoy, a leading expert on the main opposition party, there will be no contestation over leadership within the CHP. "Kemal Kılıçdaroğlu compares his party's current performance with the 2009 local elections and therefore considers himself successful. In truth, the party leadership projected that the CHP vote would exceed the 30 percent threshold but the election results did not meet their expectations. Having seen statements from both Sarıgül and Kılıçdaroğlu, I personally do not expect any contestation anytime soon," Aksoy added.