Turkey attempts to better the conditions of refugees 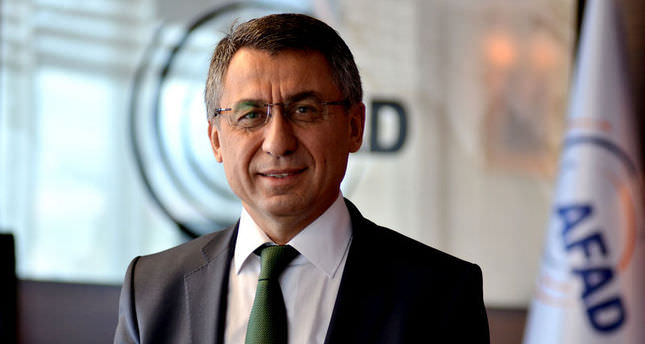 AFAD is responsible for Syrian refugees who fled to Turkey, and is tasked with providing services such as health and education

ANKARA — The civil war that has been raging in Turkey's neighbor Syria is about to enter its fourth year. Hundreds of thousands of Syrian refugees have fled Turkey and other neighboring countries and currently reside in camps. The Turkish Prime Ministry's Disaster and Emergency Management Presidency (AFAD) is responsible for the management and coordination of camps across Turkey. On countless occasions the work carried out by AFAD for Syrians has received international recognition and praise from the U.N. High Commissioner for Refugees (UNHCR), the EU and Council of Europe, as well as in international media. AFAD is not only tasked with addressing the needs of refugees but also responsible for dealing with events ranging from natural disasters to evacuation in the event of chemical weapon attacks on civilian populations. Daily Sabah spoke to the global representative of AFAD, Dr. Fuat Oktay.

How would you summarize the situation of Syrian refugees staying in AFAD camps?

Currently Turkey is hosting 224,000 Syrians at 22 refugees camps located in 10 different provinces. Almost all of the camps boast the same facilities and standards. The quality of accommodation and food we provide at our camps has been lauded internationally.
About 70,000 of camp residents are children of primary to secondary school education age. In order for these children to continue their education, a total of 3,000 teachers are employed.

Healthcare is provided for all at the camps. In the past three years, 11,000 babies have been born in camps for which not only healthcare is provided but also kindergarten facilities. For adults, 170 different branches are provided to increase their employability but also give them a reason to hold on to life.

What is being done for Syrians in Turkey who are not living in camps?

Approximately 650,000 Syrians reside in Turkey outside of camps. Therefore the total number of refugees is about 850,000. One of our provisions is free healthcare and to date 2.5 million people have utilized this service. [Some] 41,000 people have undergone various medical operations. We are continuing our efforts to register all refugees biometrically.

The U.N. and several international organizations as well as the press have praised the work carried out in the camps. What is behind this success?

AFAD is not only tasked with emergency responses to natural disasters but also is responsible for the welfare and protection of civilians during times of conflict. As a result, planning and coordination is key. As AFAD we have several contingency plans for different scenarios that may occur in Turkey. We see ourselves as a continually learning institution.

In regard to the camps, the two most recent earthquakes in Turkey - in Van and Kütahya - gave us invaluable experience with container camps, which we had in stock. Container camps are not simply about shelter, food security, healthcare and education. All require differing mechanisms. The contingency plans developed by AFAD combined with our experience enables us to produce the best possible results.
Officials from international organizations have visited and seen firsthand the infrastructure set out and the coordination in action for maintaining these large camps. It is a great source of pride that our work receives international recognition and praise.

Does Turkey or international aid cover the costs of these camps?

The cost of the camps for Turkey currently stands at just over $2.5 billion (TL 5.45 billion).

International organizations, however have only contributed $195 million. Approximately $115 million of this amount has been provided by various U.N. agencies. The humanitarian aid we have sent into Syria itself is nearly $200 million. Essentially the international community has abandoned Turkey and its Syrian refugee crisis. Despite this, Turkey has shouldered the burden and will continue to do so.

Since the Syrian crisis began three years ago thousands of people have been staying at the camps. How are the camps governed?

The longer people stay in the camps, the more we try to make them feel at home. To encourage this, kitchens and kitchen sets have been distributed. A card system has been implemented where refugees can purchase basic food and cleaning supplies from stores we have opened. We are collaborating with the World Food Programme (WFP) in this regard. This system benefits not only refugees themselves but also eases camp management needs.

There are neighborhoods within the camps that are comprised of 1,000 or more people. In such neighborhoods where elections are held, representatives are elected. These representatives act on behalf of the others and interact with camp management. We have been able to bring democracy into the way the camps are run. Developing a culture of democracy in the camps is crucial. When the Syrian refugees return to their homes, they will take this culture with them, which will be progress [compared to] where they started. They will be able to seek and defend their rights and demand accountability. I do not think there is a greater achievement than that.

In all our camps, our data processing enables tracking of those who have received that kind of assistance. Operationally this is an important asset.

Our aim is to provide a sense of harmony and a standard of living that comes as close as possible to normality for all those living in the camps. We have been recognized and praised worldwide for our efforts.

AFAD's role is to provide solutions in any given situation. In the event of complete cessation of hostilities and a political solution in Syria, we have plans in place to encourage refugees to return to their homeland. Regardless of the good quality of service we provide, it is not easy for a family to live in a container or tent that is 21 square meters. Therefore I expect at the end of the war, people will return to Syria.
If the civil war in Syria continues for years to come, we are concentrating our efforts to develop healthcare strategies and policies that can be implemented. We are in continuous dialog with public institutions and universities for joint services. Basically, we know what to do if that day comes and we are working toward improving our work.

What other international operations has AFAD undertaken?

AFAD is responsible for the organization and coordination of humanitarian aid from Turkey reaching any given area affected by natural disasters worldwide. We are also involved in search and rescue operations. All humanitarian aid sent to other countries by the Republic of Turkey is done via AFAD. We have been active in delivering aid following earthquakes in Haiti and Pakistan as well as the more recent earthquake that struck the Philippines. For example, in the case of the earthquake in the Philippines, we were able to send a technical team as well as aid by cargo plane within 24 hours. As a result, a friendship has developed with the Philippines. Another example is the coordination work we carried under the umbrella of the U.N. in the Dominic Republic.

AFAD aims to respond to disaster situations, both within Turkey's borders and globally, regardless of religion, ethnicity, et cetera to the best of our capacity.

Who is Fuat Oktay?

Born in Yozgat in 1964 and having completed early education in the city of his birth, Oktay graduated from Çukurova University from the faculty of economics and administrative sciences department of business administration in 1985. Oktay went to the U.S. to continue his academic career and obtained an MBA and a M. Sc. in manufacturing engineering from Michigan Wayne State University in 1990. Oktay went on obtain a doctorate in Industrial Engineering from the same university.

While in the U.S., Oktay worked in senior management positions at Ford Motor, General Motors and Chrysler. From March 2008 to December 2014 he was the deputy director general for THY Turkish Technic Trade and on Jan. 2, 2012 became the director of the Prime Ministry Disaster and Emergency Management Presidency.