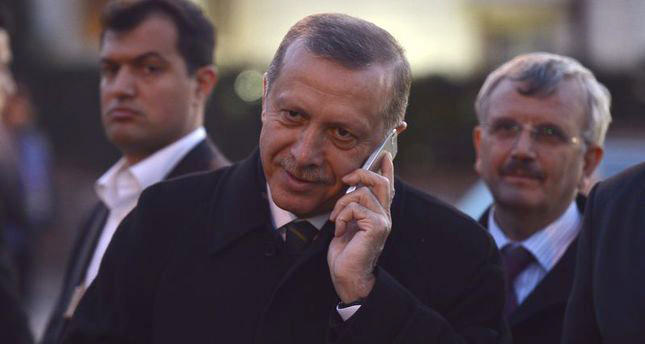 by Daily Sabah Apr 02, 2014 12:00 am
ISTANBUL — Congratulatory messages poured in following the March 30 local elections in Turkey. Leaders from all around the world called Prime Minister Erdoğan to congratulate his party on winning the local elections, which many claim carries the value of a referendum.
According to the prime minister's Office, Russian President Vladimir Putin called Erdoğan to congratulate him on his victory and expressed that he was pleased with the results. President İlham Aliyev of Azerbaijan and President Derviş Eroğlu of the Republic of Northern Cyprus also spoke to the prime minister.

The Emir of the State of Qatar, Sheikh Tamim bin Hamad bin Khalifa Al Thani; Mian Nawaz Sharif, the prime minister of Pakistan; Nechirvan Idris Barzani, the prime minister of the Kurdistan Regional Government of Iraq; and Bakir Izzetbegović, the Bosniak member of the Presidency of Bosnia and Herzegovina were also amongst those who called Erdoğan following the elections. "We follow each and every single one of [the] AK Party's elections as if it was our own party's and we are happy to share Turkey's success. I believe Turkey will continue to carry out productive projects in our country and for their people," said Izzetbegović, who confirmed that the AK Party's victory was celebrated in Bosnia and Herzegovina.

The representative of the Iraqi Turkmen Front in Turkey, Hicran Kazancı, also called Erdoğan to congratulate him and sent the following message: "It is evident that Turkey will contribute to establishing peace in the region through its leading position in justice, democracy, peace and prosperity. The March 30 elections carried the weight of a referendum to receive the vote of confidence from the people. As you expressed in your speech, we are certain that you will increase your efforts for peace and prosperity in the Middle East and we fully believe that you will continue to support Iraqi Turkmens in the future."
Last Update: Apr 02, 2014 2:21 am
RELATED TOPICS