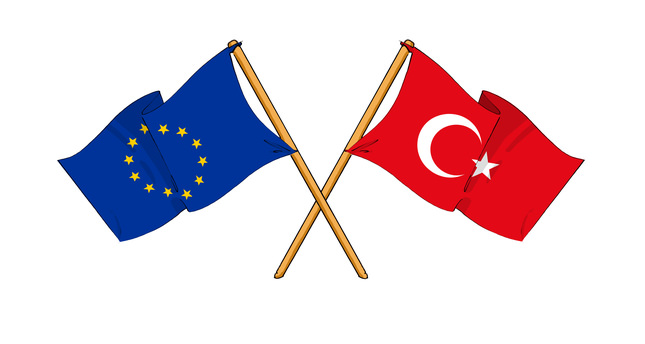 ISTANBUL — As Turkey is working to progress toward joining the European Union, Ankara and Brussels have been forced to contend with a number of issues. Even though EU-Turkey talks took a backseat due to Turkey's local elections amid the smear campaign by the Gülen Movement, the post-elections process and the government's commitment to opening the rest of the EU negotiating chapters appears set to gain new momentum in the upcoming days. Despite claims that Turkey-EU relations have been temporarily put on the backburner, Turkey's EU Ministry Media Adviser Cihangir Şahin stated that relations between the EU and Turkey at this stage are going ahead at full steam. In a detailed interview with Daily Sabah, Hüseyin Aktürk, a senior consultant and the head of European Cooperation Network Association on EU-Turkey relations, talked about the EU's view of the Gülen Movement-Turkish government dispute and Turkey's economic stance on its EU accession path.

– What is your general view of the current state of relations between the European Union and Turkey?

The relationship between Turkey and the EU has had its ups and downs and seems to have been accelerating over the past 10 years. Turkey has been and is going through a political and economic transformation process. Large scale reforms, many of which are highly appreciated by the EU, were realized in the fields of democracy and human rights.

Recently, in December 2013, the European Parliament and Turkey signed the long-awaited readmission agreement and initiated the EU-Turkey visa liberalization dialogue, which came during the 50th anniversary of the Ankara Association Agreement signed by the European Economic Community and Turkey. Although recent developments in Turkey and the heavy agenda of the government prior to the local elections appear to slow down the negotiations, in fact the relations were developing in a positive direction with the endorsement of the readmission agreement and the opening of a new chapter for negotiations on Nov. 5, 2013, which covers regional policy and coordination of social instruments.

EU Enlargement Commissioner Stefan Füle said in that meeting that, "we need to strengthen our engagement" to which Bağış replied "we are ready not only to get engaged but also get married." If we all refresh our memories about the preelection period, we will all remember that the negotiations were going strong in a positive direction and both parties were willing to take it one step further.

The government was determined to pursue talks with the EU and vice versa. But then just prior to 2014, an operation and campaign against the AK Party began and the domestic agenda until the local elections were completely occupied leaving little room for EU-Turkey talks as the EU was also occupied with its own economic crises and the Crimean crises with Russia. Regardless, the integration process is still alive and well. We can see the Instrument for Pre-accession Assistance, the main financial instrument to provide support to the candidate country, will continue providing in the 2014-2020 period, with approximately 4.5 billion euros (TL 13.2 billion) over a period of six years. There will be a slight decrease in the funding when compared with the 2007-2013 period in which the amount of funds were approximately 4.9 billion euros, but the reduction in the funding appears to be caused by the European economic crises and has nothing to do with the EU-Turkey relations.

– Do you expect any acceleration in the EU process now that the elections are over?

Indeed, just prior to 2014, negotiations were speeding up and reached an all-time peak with the endorsement of the readmission agreement, which is in a way, opening up the doors for a visa free Europe for Turkish citizens. It may seem to be interrupted with local politics and the elections, and particularly by the smear campaign against the government that resulted in the resignation of certain ministers including the former EU Minister and chief negotiator Egemen Bağış. But I expect that relations will regain momentum immediately as new EU Minister Mevlüt Çavuşoğlu seems equally determined to pursue talks and negotiations with the EU. So in brief, yes, relations between the EU and Turkey may have been interrupted by local Turkish politics as well as the heavy agenda of Europe but up until very recently very important steps were taken toward membership.

I am not really in a position to answer on behalf of the EU. I can only share my own view about how the EU interprets the situation between Gülenists and the Turkish Government. The EU has always been a strong supporter of civil society not only among candidate countries but in itself as well, as strong civil society means strong democracy. Recently, we can see that the EU did not necessarily side with this specific "civil society" and remained distant to the domestic affairs of Turkey. I do not see any strong evidence proving that the EU is in full support of the Gülen Movement or the government for that matter. The EU may see the Gülen Movement as part of civil society. The EU always welcomes movements for freedom of religion. However, it does not necessarily appear to see this movement as fully legitimate and in fact finds it rather shadowy. The EU has important concerns, especially concerning the recent ban on YouTube and Twitter and these concerns have been voiced a lot louder but the EU will have a no influence policy on Turkish domestic affairs especially on this specific matter.

– Does the EU see the Gülen Movement as a threat to secularism in Turkey?

No, it doesn't. It may however in the future. The answer to this question has been unclear to even many Turkish people, so it can be more unclear to the Europeans. There is generally a positive image drawn by the Western media about the Gülen Movement as this movement appeared many times in The New York Times, BBC, Reuters, Forbes as an advocate of moderate/ tolerant Islam. But the EU seems to be quite skeptical about the Gülenist approach to secularism, thus remaining relatively distant to the movement. As we remember, in the year 2000, Gülen faced charges of trying to undermine Turkey's secular state but then later, after he left for the U.S., he was cleared in absentia of all charges. The strategy of the Gülen Movement in the indictment against him in 2000 is explained as, it reads:

With the strong financial power and the Islamic ideological approach: a) creating a strong base with educated young people via the foundations, institutions and schools, b) staffing Gülenists in all bureaucratic positions, including in the Ministry of Education and National Police, c) supporting young people abroad who are sympathetic to political Islam introduced in Turkey. This is the indictment of Nuh Mete Yüksel, Ankara State Security Court (DGM) Prosecutor. As I said, he was cleared of all charges, but one may question whether it is a coincidence as the claims of the government today are similar to the indictment of 2000 - 14 years ago or not. I don't necessarily think that the EU sees Gülen as a threat to the secular state, but she isn't very clear about its intentions either. So, it will not take a position on either side.

The EU will always side with the democracy, rule of law and human rights, thus if it sees a significant and solid attempt which may undermine the democratic state in Turkey, it will raise concerns about it.

– Does Turkey's growing economy still play a significant role in the EU process?

We have been reading alarming headlines about Europe's economy in the past few years but the latest outlook is much better. Europe's ability to deal with financial shocks has been questioned in this period. With this in mind, a strong economic partner such as Turkey will definitely be beneficial to Europe, thus Turkey's growing economy is and will be playing a significant role in the process.

However, we must not forget that a strong economy alone will not overrule the progress made, in terms of "rule of law," "democracy" and "human rights," but it is certainly beneficial to both parties that Turkey is growing strong while implementing reforms necessary for EU accession.

Who is Hüseyin Aktürk?

After completing his baccalaureate degree at Waterford UwC of Southern Africa, Aktürk went on to complete his bachelor's degree in international relations at Colby College.

He previously worked as an international commentator, analyst on Africa. He worked as a U.N. election observer in Iraq in 2009.