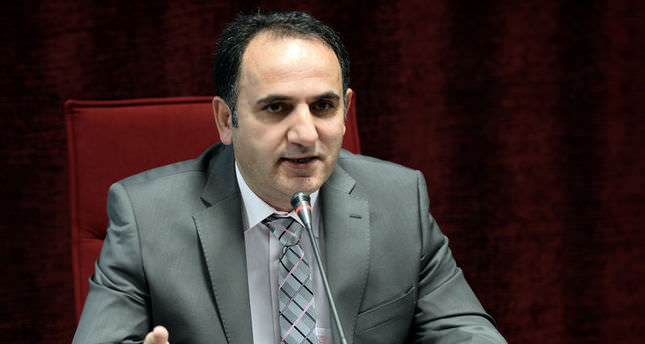 The director of Turks Abroad and Related Communities under the Prime Ministry, Associate Professor Kudret Bülbül explains to Daily Sabah what the body established in 2010 has done to help Turks living overseas.

ANKARA — For many years Turkey has seen its citizens emigrate abroad. In the past 50 years, the total number of Turkish immigrants to Europe has reached six million, a figure that surpasses the total population of some European countries.

In addition to this, the region ranging from the Balkans to the Caucasus is inhabited by millions of people who have cultural and historical ties to Turkey. In order to develop deeper ties and coordination with Turkey, the Prime Ministry of Turks Abroad and Related Communities was set up. The community's slogan is? "Wherever our citizens, our kin and our relative are, we are there." Daily Sabah sat down with Associate Professor Kudret Bülbül, the director of Turks Abroad and Related Communities to find out what has been achieved and what is planned for the future.

- This organization is relatively new, having only been established in 2010. Why was it deemed necessary to establish the organization?

As you know, a very serious crisis happened in Turkey between 2001 and 2002. It was not only an economic crisis, but also a crisis of freedom. And [it] became a reason for turning away from the outside world.

During those years, Turkey was very internally focused. In later years, as Turkey prospered both economically and politically, Turkish society regained its confidence. With economic growth, the return of Turkish tutelage, reforms that paved the way for greater freedoms and a multifaceted foreign policy, new organizations were needed to cope with the growing challenges. In this regard, the Prime Ministry of Turks Abroad and Related Communities was established to provide services to Turkish people living abroad, develop relations with kin and related communities, and provide education services to foreign students outside of EU projects. We also act as the coordinating organization on these issues.

- Can you tell us about the type of work the organization undertakes?

There are four key elements we work on. The first of these is with the Turkish population living abroad. There are approximately six million Turks living abroad - a number greater than the total population of some countries. We coordinate work both within Turkey and externally relating to citizens that have emigrated. Secondly, we deal with kin and related communities.

This covers a wide geography including the Balkan, Caucasus and Central Asia.

We are responsible for the coordination and effectiveness of the services provided to societies that we share cultural ties with.

Thirdly, we are responsible for the international students that come to Turkey for academic purposes. This includes ensuring that necessary services are in place to assist international students who have been selected for scholarships. Lastly, to support all three of the aspects I mentioned, we coordinate and work with nongovernmental organizations [NGOs]. We aim to help NGOs to be effective in their own countries and preserve their relations with Turkey.

- Is the work you do ever treated with suspicion in Europe or ever seen as meddling in internal affairs?

One of our fundamental aims is active citizenship, which is also considered a key principle in Europe. To raise awareness on this matter, 2011 was declared the European Year of Voluntary Activities Promoting Active Citizenship. Just as our citizens in Turkey are aware, informed, have a sense of civic duty and want to participate in governance, we want to promote Turks living abroad to have the same participation in the governance of the countries where they reside. As this is a key principle within the EU, I can say with confidence that our work is not seen as meddling or treated with suspicion.

- Can you tell us about the work you do for citizens of the Turkish Republic living abroad?

We are aiming to be the organization that will solve all the problems that emigrant Turks experience in Turkey. For example, citizens who have lived abroad in some cases experience otherness or alienation. We have projects to help overcome these issues. One of the biggest problems we find is language.

To give you a recent example, I was in Germany, which has the largest emigrant Turkish population, and met with leaders of the Assyrian community who emphasized that citizens who traveled back to Turkey struggled with the lack of Turkish language fluency. In this regard we have undertaken work toward preserving the Turkish language for emigrants.

For as language is lost, so is culture.

Thus, coordinating with other organizations on promoting the Turkish language is one of the fields we are working on.

Another project of ours is the Mavi Kart (Blue Card). Although the Turkish Republic recognizes dual citizenship, there are some countries, particularly in Europe that do not allow dual citizenship. Turks who reside in these countries are legally unable to claim dual nationality status. For citizens in this predicament, to ensure they are able to maintain their rights as citizens of Turkey, we have started the Mavi Kart scheme. The latest legislation on this was carried out in 2012. As an organization we were instrumental in this process.

Another area in which we play a key role is enabling citizens abroad to vote. In the upcoming presidential election in August, for the first time 2.7 million Turks abroad will cast their ballots. We contributed to the coordination between the Supreme Election Board (YSK) and our consulates across the globe to implement a voting system.

- What type of work is undertaken for kin and related communities?

Our organization is often confused with TİKA on this matter. I will illustrate the differing roles between TİKA and us to help clarify. If we think of a municipality, the infrastructural work, technical support and maintenance is undertaken by TİKA, whereas we cover the social, cultural and intellectual elements. Outside of Europe, there are millions of kinsmen and related communities in the Balkans, Caucasus and Central Asia. The work we do in these regions does not affect only those with Turkish roots, but everyone.

From 2011 to 2013 we collaborated with NGOs in 73 different countries in various projects both domestically and abroad. We provided TL 33 million worth of support to the NGOs. Fifty percent of these projects were aimed at Turks living aboard, 40 percent toward kin and related communities and 10 percent for international students studying in Turkey. Details on these projects can be found in our publication "İMECE Sivil Toplum Destekleri."

- What is the Turkey Scholarship Project? Can you tell us more about it?

Turkey Scholarships is a program that provides full scholarships to students who are seeking higher education in Turkey. A key aim is to develop relations with other countries and, with a people-oriented approach, contribute to global knowledge. Students receive the scholarship for the duration of their studies. To date we have granted scholarships to 13,000 students from across the globe. This year we received 36,000 applications from 150 different countries. Of these applications 2,000 were granted for masters and doctorate studies. We accept applications in eight different languages. We send delegations to the chosen countries to carry out interviews and evaluate the applications.

As Turkey has grown economically, it is becoming a desirable international center.

Thus, companies from varying sectors are beginning to require personnel that speak Turkish. Unfortunately, we do not have a standard testing system such as TOEFL or IELTS for the Turkish language. In conjunction with other relevant organizations, we are working on developing one. This issue is, in fact, within our responsibility; however as it has a negative impact on international students wanting to study in Turkey, we are lending our support.


Who is Kudret Bülbül?

Kudret Bülbül graduated from Faculty of Political Sciences at Istanbul University in 1991. Bülbül completed his masters at the same university and went on to obtain a doctorate at the Faculty of Political Sciences, Ankara University, in 2004. Bülbül lived in London in 1995 for academic reasons. In 2002 – 2004 Bülbül was visiting scholar at Kansas University in the US and became associate professor in 2007. Bülbül has actively been contributing works to NGOs and think-tanks. In 2010, he was Deputy Undersecretary at the Public Order and Security Undersecretariat. Bülbül was appointed as head of the Presidency of Turks Abroad and Related Communities in February 2014.