Manipulative Hersh under fire for claims 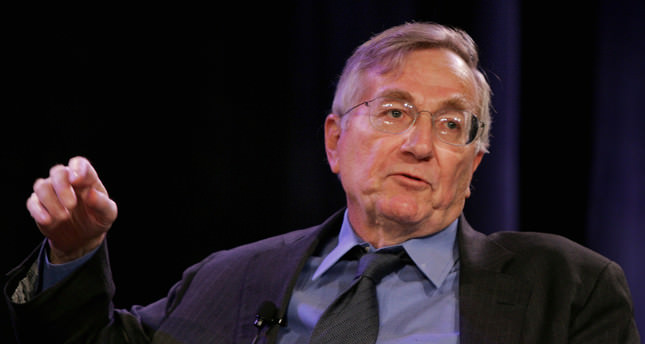 by Tevhid Nazmi Baştürk Apr 07, 2014 12:00 am
ISTANBUL — American journalist Seymour Hersh once again attempted to run-a-muck of the United States' foreign policy in a new piece published in the London Review of Books. Like his earlier articles during the Obama administration, which claimed that the White House was falsifying information regarding the operation which assassinated al-Qaeda leader Osama Bin-Laden, Hersh once again throws the Obama administration - and now also the Turkish government - under the bus in what he claims was a staged attack on Ghouta. Despite all the facts stacked against him, Hersh claims that the sarin gas attack against the civilians of Ghouta was a staged incident in which Turkish Prime Minister Recep Tayyip Erdoğan and U.S. President Barack Obama collaborated to arm the Al-Nusra Front insurgent group, a subsidiary branch of al-Qaeda.

His article makes the argument that it was the Turko-American-armed Al-Nusra Front and not the tyrannical Bashar Assad regime that was responsible for the attack which killed 1,429 civilians and injured 3,600.

Hersh makes these claims based on unidentified intelligence he gained from unnamed sources within the U.S. government, which he claims served as his informants.

However, field footage from Ghouta, published information and findings of a United Nations inquiry all debunk his claims. It is now well-known that the U.N. found chemical weapons in the Syrian Regime's arsenal - the same chemical weapons seen in the shells found at the site of the Ghouta attack. The Syrian regime has acknowledged that it does possess the Volcano rockets found in the U.N. reports and at the scene of the massacre, while agreeing to disarm them.

In his "ground breaking" piece of "investigative journalism" Hersh also fails to mention how the Turkish government was able to not only produce the two-meter-long rockets, but moreover how they managed to transport them to a suburb of Damascus under heavy land and air patrol by the Assad regime.

Instead of recognizing the fact that both Turkey and the U.S. have endured long-term struggles with al-Qaeda terrorist insurgencies, Hersh presents the illogical claim that two of NATO's most important members have armed their agitators with chemical weapons.

Syrian National Council (SNC) member Khaled Khoja told Daily Sabah that the Assad regime accepted sole use and possession of the chemical weapons, stating that these false claims came about due to agitation caused by the Turkish government's support of the Syrian people's struggle. "The field studies which ensued following the Ghouta massacre confirmed that the chemical weapons used in the attack belonged to the Assad Regime, these studies were accepted by the said regime," said Khoja. "The sarin gas in the weapons used in Ghouta is only in the possession of the Syrian regime and has only been used by it; the U.N. has gone on to confirm this as well. "The material and logistic aid Turkey provides the Syrian people with has bothered the Assad regime and its allies. Due to Turkish aid, Syria's northern boundaries have been affected little by the conflict. Turkey's human aid efforts have caused regime-supporting individuals to launch a smear campaign against the country," Khoja continued.

Another member of the SNC, Hussein Abdullah, also told Daily Sabah that "Turkey never provided the Free Syrian Army or any other opposition group with any sort of weapon. Everyone obtained their arms from other Arab states. Turkey only provided humanitarian aid to the Syrian People."

Online investigative blogger Elliot Higgins was among the first to debunk Hersh's "investigative" piece in a post on his blog. The blog post provides comparative images of the Volcano rockets known to be owned and used by the Assad regime's forces with those found at the site of the Ghouta massacre. The post went viral on Twitter as journalists from the U.S., Turkey and around the world shared the informative post with their followers. It comes as no surprise that officials within the White House also refuted Hersh's findings.

Hersh's article holds no valid evidence and appears to be an ill-fated attempt at garnering attention for a journalist whose prominence came and went with the Vietnam War. It is no surprise that the outlet which published his greatest and most ground-breaking work, he New Yorker, refused to publish this article or, for that matter, its first part. It is a shame that one of America's great journalists has turned away from the basic tenants of the trade in order to grab the global spotlight through fabrication.
Last Update: Apr 07, 2014 7:37 pm
RELATED TOPICS