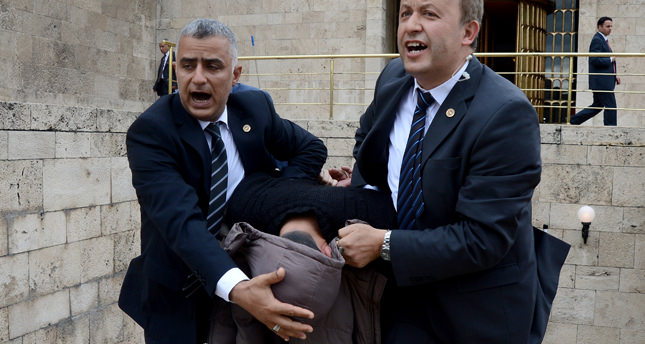 by Ali Ünal Apr 08, 2014 12:00 am
ANKARA — The leader of Turkey's main oppostion Republican People's Party (CHP) Kemal Kılıçdaroğlu was attacked on the way to a group meeting in the parliament. Media outlets reported that Kılıçdaroğlu was punched in face twice and his glasses were broken in the attack.

CHP leader Kemal Kılıçdaroğlu spoke in parliament following the attack on him and told everybody remain calm. Kılıçdaroğlu stated that they are not afraid of anything and they are determined to bring a 'healthy' democracy to Turkey.

"The path to democracy is full of obstacles," he said. Later on Pro Kurdish Peace and Democrasi Party (BDP) Deputy Sırrı Sakık anounced that the attack was not related to their party. AK Party Deputy Şamil Tayyar also condemned the attack via Twitter. The identity of the attacker is not yet clear.

"We never appreciate these kinds of actions and strongly condemn the attack on the opposition leader Kilicdaroglu," said Erdogan.