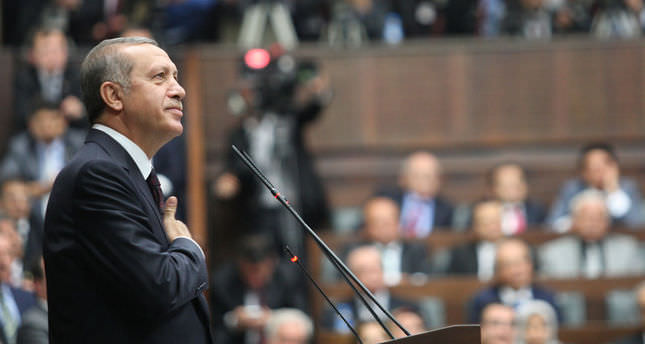 ISTANBUL — Prime Minister Recep Tayyip Erdoğan yesterday addressed AK Party parliamentarians at a group meeting for the first time since the local elections that took place on March 30. Evaluating and analyzing the results of the elections, the prime minister noted how the AK Party successfully won 45.5 percent of the nationwide vote, while it was able to gain at least 20 percent of votes in all provinces (with the exception of Tunceli). He made compelling remarks about the people's choice and criticized agents of the Gülen Movement, headed by Fethullah Gülen who lives in self-imposed exile in the United States, for infiltrating state institutions in an effort to topple the ruling AK Party government.

Erdoğan reported that the AK Party won by a landslide compared to its opponents, adding that the Republican People's Party (CHP) and the Nationalist Movement Party's (MHP) votes together didn't come close to AK Party figures, with the exception of Ağrı where elections will be repeated in June. Out of 1,394 municipalities in Turkey, the AK Party won 823. Out of 30 metropolitan municipalities, the AK Party won 18; and 30 out of 51 provinces were led by the party.

Highlighting the fact that this was the eighth election in the AK Party's 13-year rule, Erdoğan expressed his gratitude to all those who supported the party. He went on to express that it has been a difficult period filled with vicious attempts by infiltrators and traitors to halt Turkey's rise to power through a number of dirty alliances and plots, coupled with unethical campaigns to discredit the government.

Erdoğan noted that Turkey's democracy, political system, economic and social stability, reconciliation process with the Kurds and atmosphere of peace were all targeted by a number of people disturbed by the "new Turkey" since the Gezi Park protests in the summer of 2013. "The actual target of these attacks was Turkey, Turkey's unity and brotherhood, rather than the AK Party," said Erdoğan, who suggested that the agitators used every method possible to cause chaos, including street movements, terrorism, vandalism, fascism, racism, hatred and discrimination, and to discredit Turkey's international reputation. He added that they also did not hesitate to unlawfully record and wiretap people's private conversations and fabricate tape recordings.

Erdoğan panned those who called for the boycott of the economy and for foreign investors to stay away from Turkey, as well as those who criticize the government for responding to attacks by Syrian forces which shot down a Turkish plane. "History will not forget the betrayal and these inhumane attacks," said Erdoğan. He went on to state that a number of media organs, including those affiliated with the Gülen Movement, exploited their positions by publishing provocative and misleading propaganda and deceitful polls prior to the elections, while opposition parties did not hesitate to cooperate with such traitors in hopes of gaining votes.

Explaining the importance of the March 30 elections for the future of Turkey, Erdoğan affirmed that it marks the date of doing away with regime of tutelage, and a day when arrogant actors who look down upon the people's choice lost the battle. The prime minister also emphasized the fact that his government will continue to embrace all citizens regardless of their background or ideologies and that the AK Party "got the message that the people entrusted them with the duty to fight against agents of the Gülen Movement who have tried to establish a parallel state within Turkey's governmental institutions." He called on people not to allow the Gülen Movement to exploit their sincere religious feelings and raise funds without recording and reporting those funds to the government. Touching upon the issue of corruption, Erdoğan stated that his party will fight corruption as promised when it first came to power in 2002.

In response to the CHP's opposition to the election results in Ankara, Erdoğan stated that CHP candidate Mansur Yavaş (formerly from MHP) is provoking people to take the issue to the streets and cast a shadow on the elections. He claimed that the CHP cannot seem to accept the fact that it lost the elections. Erdoğan also responded to CHP leader Kemal Kılıçdaroğlu's remarks that his party demands a "civilian president" and stated that the current provisions allow political parties and parliamentarians to choose candidates who can run for president and that the people will have the final say on who the president can be.
Last Update: Apr 09, 2014 12:32 am
RELATED TOPICS