Seymour Hersh debunked by Turkey, US 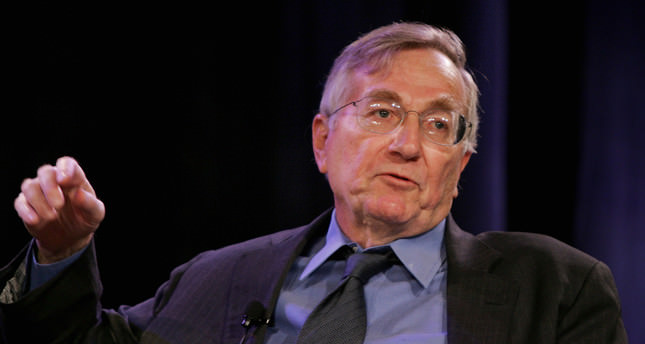 Claims made against Turkey and the U.S. by Seymour Hersh in an article are denied by both governments, while experts question his assertions, criticizing them as flawed and baseless

ISTANBUL — The governments of both the United States and Turkey have dismissed and spoken out against allegations by American journalist Seymour Hersh as presented in his article in the London Review of Books. Hersh's controversial article alleged that the sarin gas chemical weapons used in the Ghouta massacre were fired by the al-Nusra Front insurgent group, a subsidiary branch of al-Qaeda, and that the tyrannical Bashar Assad regime was not responsible for the tragedy that killed 1,429 civilians and injured 3,600 in a district of Damascus last year.

Basing his work on "information" he received from an untraceable source within the White House, Hersh went further to accuse both the U.S. and Turkish governments of arming the al-Qaeda insurgents.

On Tuesday, both the U.S. and Turkish governments issued their responses to the slanderous allegations. "The Assad regime, and only the Assad regime, could have been responsible for the chemical weapons attack that took place on Aug. 21," said Shawn Turner and Caitlyn Hayden in a statement. "The suggestion that there was an effort to suppress or alter intelligence is simply false."

Jen Psaki, the spokesperson for the State Department, also said during a daily press briefing that the sole user of chemical weapons in the Syrian conflict was the al-Assad regime. "In light of our reports and intelligence we had received, we believe beyond any doubt that the attack on Aug. 21 had been carried out by the Syrian regime and we are still behind the same view shared by the international community," Psaki said.

Turkish Deputy Prime Minister Bülent Arinç also addressed the press, stating that "[t]he claims based on anonymous sources have been conclusively rejected by White House officials and it has been reconfirmed that the al-Assad regime is solely responsible for the chemical attack."

He also read a note given to him by Prime Minister Reccep Tayyip Erdoğan stating that the allegations were absolutely false.

Daily Sabah spoke to Dan Kaszeta, a chemical, biological and radiological defense expert to see if Hersh's claims had any truth to them.

Kaszeta said: "First, I think that the Hersh article is not good for many reasons; he relies completely on one alleged source in U.S. intelligence. This is ironic because his last article accused U.S. intelligence of 'cherry picking;' in other words, finding the one source that validates your opinion. He falls prey to this problem himself. Both this article and his discussion on Democracy Now show he actually doesn't understand sarin or how it is produced. He ignores the physical evidence and facts about the rockets, which are well documented as being in use by al-Assad's forces. Much of his claims about sarin are based on a sample allegedly provided by Russian intelligence. Russia has agendas. His discussion of 'matching batches of Sarin' is based on incorrect assumptions. By definition, every batch of binary sarin is different. The presence of hexamine, an additive in the sarin, is a unique signature linking the Aug. 21 attack to Syrian inventories."

Eliot Higgins, an online activist and blogger who goes by the pseudonym Brown Moses, also presented Daily Sabah with his views.

Higgins' recent blog post, issued as a response to Hersh's article, used comparative images from the Ghouta massacre site and those from the Syrian regime's arsenal to disprove the Pulitzer Prize winning journalist's argument.

"Hersh's understanding of the Aug. 21 attacks is so hugely flawed, and his claims being [sic] so reliant on one unnamed source. For example, he insists the munitions used on Aug. 21 were 'homemade' and therefore they are clearly not used by the government. However, ample video and photographic evidence from both sides of the conflict clearly shows these are, in fact, a type of munition used by the Syrian military, almost certainly developed during the conflict," Higgins said, adding: "This isn't information that's hidden away that Hersh would have struggled to find; five minutes on Google would have uncovered that information, so for Hersh to be totally ignorant of those key facts strongly suggests he's not even done the most basic research into his claims."
Last Update: Apr 09, 2014 1:12 am