The Assad Regime, Sarin and the Facts 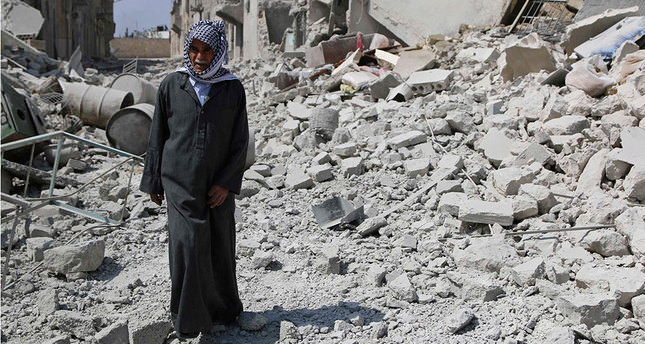 by İbrahim Kalın
Apr 09, 2014 12:00 am
On August 21, 2013, the residents of the Ghouta suburb near Damascus, Syria woke up to a terrible chemical attack. Many had only a few hours to live. More than 1500 hundred civilians were killed in a matter of hours in the early morning of that fateful day. The attack was carried out with surface-to-surface rockets containing the chemical agent sarin gas. The footage and pictures of the event shocked the world. We all watched in disbelief, wondering how any government can commit such a crime against its own people before the eyes of the world.

The United Nations had already sent a mission to Syria to investigate chemical attack claims earlier in March and April, 2013. After the Ghouta attack, the UN requested immediate access to the areas bombed on August 21. According to both Syrian and international sources, the Syrian regime continued to bomb the area on August 22. The government and rebel forces fought on August 23. After the UN called for a ceasefire, the Syrian regime allowed the UN team into Ghouta on August 25, which was four days after the chemical attack. There was also widespread intelligence and open source reporting prior to August 21 that the Assad regime was distributing gas masks to its troops in and around Damascus. Not surprisingly, there were no casualties of Syrian troops in Ghouta on August 21.

After completing its report three weeks later, the UN Report released on September 16 confirmed the use of Sarin gas in Ghouta, saying that it "collected clear and convincing evidence that surface-to-surface rockets containing the nerve agent Sarin were used… in the Ghouta area of Damascus."

Another UN Report released on February 12, 2014 noted that all evidence regarding the August 21 attack "indicated that the perpetrators likely had access to the chemical weapons stockpile of the Syrian military, as well as the expertise and equipment necessary". The inspectors on the ground also identified the surface-to-surface rockets as 140mm BM-14 rockets, which were manufactured in Russia and 330mm rockets manufactured probably by the Syrian army.

Source: Report of the independent international commission of inquiry on the Syrian Arab Republic

Various reports after the August 21 chemical attack confirmed not only the fact that the Syrian regime had sarin agents in its chemical arsenal, but also the fact that it alone had the capability to launch it through surface-to-surface missiles – advance weapons the Syrian rebels do not possess even today.

After the UN report, UN Secretary-General Ban Ki-moon called the findings a clear evidence of a war crime.

It is also important to note that months before the Ghouta attack, as reported by Le Monde, there was evidence of the use of chemical weapons by the Syrian regime in Aleppo, Homs and other Syrian cities in March and April 2013.

At the time, the Syrian regime was denied all access to UN and other international observers to investigate the claims. American, British, French, Turkish and Israeli intelligence had all confirmed the use of chemical agents by the Syrian regime.

After the international outcry in late August, the Syrian regime hastily acceded to the Chemical Weapons Convention on September 14, 2013 and accepted the UN Security Council Resolution 2118, which imposed on the regime to disclose and destroy its chemical weapons and production facilities within a set time-period. Having been caught red-handed in Ghouta, the Syrian regime had no choice but to accept a chemical weapons agreement in the middle of a brutal war.

Assad's backers questioned the motive behind the regime's use of chemical weapons when UN inspectors were already in Damascus, and concluded with no viable evidence that they had to be used by the rebels. This logic makes no sense because one can justifiably ask why the regime did not hesitate killing more than 200 thousand people with conventional weapons in the first place. We may also ask why it imprisoned and tortured tens of thousands of people and forced millions of civilians to flee to neighboring countries. On January 20, the gruesome pictures of torture and ill treatment of thousands of people in Syrian prisons were published, showing the extent of the Syrian regime's brutality and disregard for human life.

One needs to keep these few facts in mind when reading Seymour Hersh's "The Red Line and the Rat Line", published in the London Review of Books on April 6, after the New Yorker refused to publish it. Mr. Hersh conveniently weaves together highly selective data to fabricate a story that has no connection with the facts on the ground. In his attack on the Obama Administration and the Turkish Government, he turns a blind eye to scores of reports of facts by international bodies including the UN, intelligence reports, human rights organizations and serious journalism.

His claims about Turkey's support for al-Qaeda-related groups are not based on any evidence except the highly questionable personal testimonies and statements of "anonymous intelligence sources" – sources with which you can write any story but certainly not one of serious journalism. Turkey never supported terrorist groups within the nation, Syria or elsewhere. It itself has fought against them. After 9/11, Turkey was the target of several al-Qaeda attacks on its own soil. Moreover, Turkey never wanted to go to war with Syria, and, in spite of Syrian provocations, did not. If Turkey wanted, it would have had many reasons to do so over the last two years. Despite the failure of the international community to stop the war and help the Syrian refugees, Turkey shoulders the economic and humanitarian burden of a bloody and costly war along its 911-km border.

Mr. Hersh mixes up information culled from different sources to write a highly imaginative script fit for a Hollywood feature film that serves well the brutal Assad regime and its supporters. His claims, based on conjecture and imagination rather than facts, have been denied by U.S. and Turkish authorities.

Such faulty scenarios are a perfect pitch for the Assad regime to present itself to the West in a more likeable manner. When the war in Syria got out of hand, the Assad regime wanted to peddle to the Arab world the notion that this was a war against Israel and for an Arab-Islamic cause. It presented itself as a resistance front against Israel to rally the Arab support behind him. This propaganda fell apart when Hamas, utterly shocked by the regime's brutal and bloody response to the legitimate demands of the Syrian people, left Damascus at a great security risk for itself. The Arab League rejected Asad's claims and urged him to leave.

Then the regime changed its tactics and began to use the wildcard of al-Qaeda terrorism. Implementing an expertly designed PR strategy, it sought to position itself as fighting against Islamic radicals, crazy jihadists, throat-cutting fundamentalists and Western-hating Islamists. The PR stunt worked and is still using this tactic. The reality, however, is that the Asad regime is supporting the Islamic State of Iraq and the Levant (ISIL) against the Free Syrian Army in northern Syria and along the Syrian-Iraqi border to divide the opposition forces. The regime is no stranger to using terrorist organizations as proxy groups; Turkey knows well of its support to the PKK during Hafiz Asad's reign in the 1990s. The Lebanese, too, know these tactics well from their own country's checkered history.

The fact that the Asad regime still has the firepower to kill its own people does not change the fact that it is responsible for the killing of tens of thousands people with conventional and chemical weapons.