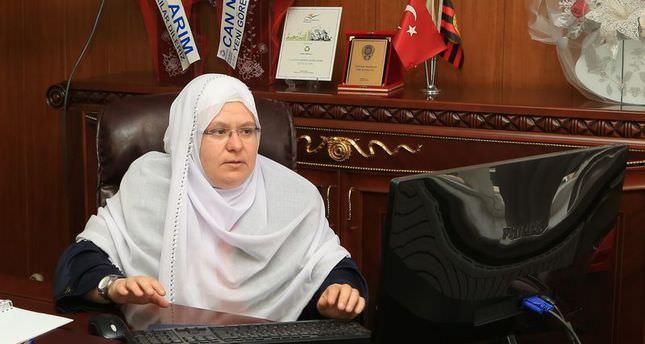 Despite receiving national attention with her traditional attire, the new mayor of Eskişehir's Mihalgazi district, Zeynep Akgün, says her priority is to be accepted by locals and help women to attain their potential

ISTANBUL — Held on March 30, Turkey's local elections had ground-breaking results. Many unconventional candidates ran for local positions, particularly in Anatolian cities. One of these candidates was in the Mihalgazi district of Eskişehir province in the north-west of Turkey. Previously established a cooperative to help female farmers in the district, the new mayor Zeynep Akgün sets an example with her local attire and her struggle and determination to improve the lives of women.

A graduate from Business Admiration from Sakarya University, Akgün founded the cooperative, in 2004, which currently has 400 members, to enable farmers to produce greenhouse vegetables. Akgün is known for wearing the shalwar, local attire featuring baggy "harem pants" and yashmak, a plain white cloth to cover her hair. Her clothes have special purpose, she says. "I want people to feel that I am one of them," explained Akgün. "It is my choice and I will keep on with it. I am a religious person and I prefer to dress in local traditional attire, which I consider an Ottoman legacy, rather than wearing an official suit." She added her district is fond of her clothing and people should avoid attaching ideological stigma to her dress. "People shouldn't judge one another based on their clothing," she said. "Turkey has to leave these issues behind and move on." Akgün says she never changed her style of clothing, even for official meetings held in Ankara and Istanbul.

Akgün said she decided to run for the mayoral office upon proposal by her party. "They said I came first in the pre-election polls and asked me to run," she said.

After the announcement of her candidacy, Akgün said her husband is one of her biggest supporters: "My husband has always been with me. That surprised people very much." Emphasizing that the Republic of Turkey granted women the right to vote and to stand for elected office as early as 1930, Akgün said men exert power in a very rigid way by purposely ignoring their female counterparts. Akgün said she received very sexist comments from her male opponents. "They said women can't manage the mayoral office," she said. "This low level of criticism came from our rival politicians. I was very sad when I first encountered those comments. They said those comments are political maneuvers. What really matters is to be elected. Gender is out of it." Reinforcing her political stance regarding gender discrimination, Akgün says one of her first actions will be to put positive discrimination in favor of women into practice.

Akgün says during her discussion with the female voters, she received requests for travel programs. "As mayor, I will make in-district transportation free for women," she promised. "We will decide on a reasonable ticket price for the men." In order to make her female voters' dreams come true, Akgün also promises a travel program. "The people of Mihalgazi are very hard working," she said. "However, all the money people earn goes to their family expenses. They do not have much to spend for social occasions. By organizing arts and culture events, we will offer free travel programs for our women."

Akgün also mentioned her social support projects for the elderly, saying that she will pay special attention to home care services. "Women, especially elderly women who need home care services, will be provided for," she said. When asked whether she would consider the ministry office or parliament, Akgün responded that the most virtuous goal in life is to serve the people. "I don't have such goals," she said. "I did not even consider to run for the mayoral office."

This year's March 30 elections were held in 81 provinces, 919 districts, 18,670 villages and 30,050 neighborhoods. According to the figures announced by the Association for the Support and Training of Women Candidates (KA.DER), 37 female candidates in total were elected for the mayoral offices. Of the female candidates elected, three are in charge of metropolitan municipalities, one of a province, and 33 of district mayoral offices. According to KA.DER, the total number of female mayors elected after the 2009 local elections was 26.
Last Update: Apr 09, 2014 1:24 am