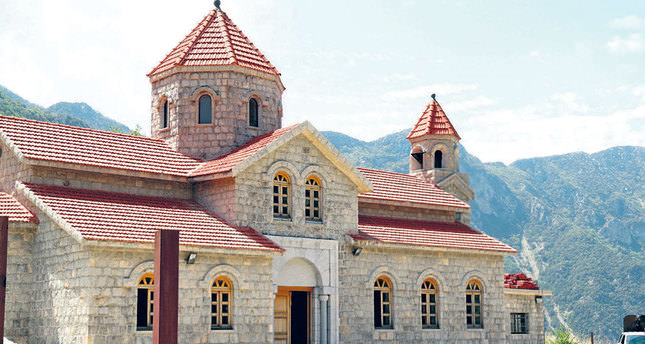 KASAB, Syria — Kasab, which is located across the border from Yayladağı and predominantly Armenian, has been in the spotlight for the last two weeks after clashes broke out between Syrian forces and the opposition.

Black propaganda against Turkey was spread in the form of allegations that Turkey was part of the killing and illegal seizure of the goods and houses of the Armenians in Kasab. Against this backdrop, Daily Sabah visited the town two days ago to investigate the allegations of massacres of Armenians and destroyed churches, graveyards and houses. When Daily Sabah arrived, the region was completely devastated by the Assad's long-haul mortar attacks on the hills around the town. As the Syrian opposition has control points in the region, the Syrian regime's continuous attacks turned the town into a battleground.

Churches and graveyards not ruined

Under difficult circumstances and in between constant attacks, the team visited the churches in the town and Armenian graveyards. There were three churches in Kasab, and although they were not completely in ruins, the effects of the civil war were apparent on their structure. Some parts were damaged by the regime's bombing campaigns, but the goods and holy items of the Christian people had not been harmed.

It was also observed that the Armenian graveyards in the town were not deliberately damaged or ruined.

Syrian opposition fighters interviewed by Daily Sabah said they have no reason to damage the graveyards and they only aimed to keep Kasab in order to gain the upper hand against the Syrian regime.

They added that there is no hostility against Christians living in the region. Some of the opposition forces expressed dismay that all Syrian opposition fighters were labeled radicals hostile to Christians.

"We apologize to Armenians"

The residents of Kasab vacated the town because of the intensity of the fighting, leaving only the fighters. Both the Armenian and Arab residents fled to less-affected areas or Turkey.

Eighteen of these Armenians fled to Turkey a couple days ago and were met by officials of the district governorate at the Yayladağı border.
They were first placed in a regional teachers' lodge and then moved to the only ethnically Armenian village in Turkey, Vakıflı, in the Samandağ district of the southeastern city of Hatay. 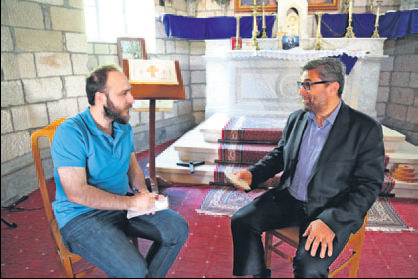 "Firstly, we apologize to the Armenians because we entered their church without permission and disturbed them because of the ongoing war," said Feeda Majnoun, a senior official with the Free Syria Army (FSA) and an organizer of the Armenians' transfer to Turkey. "We are really sorry that Kasab turned into a warzone and the Armenians had to leave their homes."

After expressing his regret about the effect of the war on the Armenian population, he emphasized it was necessary in order to push forward with the fight against the Syrian regime. He also pushed back against accusations of wanton destruction.

"Secondly, there are allegations that we ruined Kasab's historic churches, but we see Kasab as a place that needs to be protected because of the historical richness here that belongs to the Syrian people," Majnoun said. "We do not want destruction in this town as much as the Armenians who reside here. Thirdly, protecting this place is a fundamental duty of all Syrians, regardless of ethnicity or religion."

He called on the world to intervene to help the people being devastated by Syrian forces. "[Syrian President Bashar] Assad is destroying not only Kasab, but also all of Syria, including Aleppo, Damascus, Idlib and Homs," he said.

Majnoun pointed out that Muslims and Christians had been living together in harmony in Kasab. When asked where the Armenians went, he said, "After the military operations, it became impossible to stay in the region. The electricity is gone, public transport is not operating, there are continuous bomb attacks. That's why the youth of the region fled to the southern region of Latakia while the elders stayed here. We told the elders that they may stay here as long as they want and we will try to meet their requirements to the utmost."

After a while, even those who chose to remain eventually opted to leave. These people were evacuated by opposition forces to Turkey or Latakia, he said. His forces developed a detailed plan to ensure the safety of the evacuees.

According to Majnoun, of the two Armenians who said they wished to remain in Kasab, one is now in hospital after a bomb attack. His condition is stable.

Armenians' goods will not be seized

Regarding the question of what will happen if Armenians want to return to the town of Kasab, Majnoun said that these are their own properties and that they can return whenever they want. The opposition said that they use Kasab only for military purposes, such as repulsing the Syrian regime, and have the upper hand in the ongoing war. They added that they have no problem with Armenians, and it is definitely forbidden in Islam to hurt someone for being a non-Muslim. They said, "I hope the war will be over as soon as possible, and everyone will go back to their hometown."

Denying allegations that Turkey has a negative attitude toward Armenians, Majnoun stated that Turkey helps those in need regardless of ethnic or religion-based discrimination. He also indicated that they have never supported the Islamic State of Iraq and the Levant (ISIL), which is active in some regions in Syria and known for its harsh attitudes toward non-Muslims. He added, "The tragedy in our country [Syria] will not come to an end as long as the pressure on the Assad regime and its collaborators responsible for the massacre of people is not increased."

He continued by saying, "The international community should apply more pressure on the Assad regime. Armenians here are aggrieved, and Syrians from different sects and ethnic origins all around Syria are also aggrieved. Assad is attacking aggressively because he has lost control, harming not only Syria but also the entire region. International and regional actors should take action."

After finalizing the Daily Sabah team's observations in Kasab, we headed to the village of Vakıflı to visit Armenians who took shelter in Turkey with the help of the opposition. When we arrived in the village, we received information from village chief Berç Kartun about the Armenians. Kartun said that prior to the two sisters who came 10 days ago, 18 Armenians, including seven females arrived in the village and that the Armenians were welcomed by Yayladağı Governor Turan Yılmaz at the border crossing and transferred first to the teachers' lodge and then to the village of Vakıflı when their medical checks were over. Kartun stated that nearly 2,000 Armenians headed toward the Latakia region, taking care to stay out of the battlefield, while the elders stayed in the village. Highlighting that the opposition do not have a negative attitude toward Armenians, Kartun said that the Armenians were transferred to this secure place without any exposure to maltreatment and that they only suffered from difficulties that come with the harsh war conditions for nearly 10 days.

Hoping the war comes to an end quickly, villagers stated that they would help their guests as much as they can if the war does not end soon. Praising the Turkish government, Kartun said the government has met all the requirements of the Armenians, including food, medical care and other necessary items.

He continued by saying that the governorate also continuously looks after the Armenians and does not allow the villagers to shoulder all the burden on their own. He further pointed out that along with the Armenians, there was an Alawite individual who was transferred to Turkey by the opposition, but officials transferred this Alawite to another location for security reasons.

"We lost everything that we have"

In an interview with the Armenians who came to Vakıflı village, their statements supported those of the opposition.

Gathering and cooking in the church's garden, the Armenians welcomed the Daily Sabah team. They asked, "Why is our country [Syria] in this situation?" and said that they wanted to return when the war is over. Defining Kasab as a summerhouse, the Armenians said that they generally stayed in Aleppo in winter, but stayed in Kasab in summer.

They indicated that they were content with their life and could not understand how their town turned into a battlefield.

Even though they are stricken by the ongoing war, the Armenians said the opposition did not treat them badly, but they were rather caring.

They had to leave Kasab

The Armenians said that the Assad regime could take the Armenians while leaving Kasab, but they would have to walk many kilometers. They said that when they told the regime that their health would prevent them from walking such a distance, the regime did not look after them and were quick to leave the town. They added that the opposition that came after the Assad regime searched their homes for guns, and then left. They added that first they wanted to stay in Kasab, but when the effects of the war started to become more visible with the blackout, the cessation of water and public transport and the closing down of markets, they realized that they had no choice but to leave.

For the Daily Sabah team, after this trying and life-threatening trip, we found out that the Syrian opposition and Turkey had no adverse attitude toward the Armenians to make their lives harder, as was indicated by certain media outlets the last two weeks. Quite the contrary, the Armenians were transferred to Turkey under secure conditions with the coordination of Turkey and the opposition.

In an interview with Yayladağı Governor Yılmaz, he said Turkey would never leave those who are in need out in the cold regardless of their religion, ethnic origin and sect.

When we arrived in Kasab, there were bombings and shootings in the region. We overcame serious danger during the shootings. Two bombs fell near us twice, and we were targeted by guns. The opposition members that we interviewed stated that the strife continued intensively in the south, where the battle zone is located. They said that the close quarter battle has been going on between the Syrian regime and the opposition.

Highlighting the uncertainty of the situation, they said the region where the conflict is going on is quite critical, and if the opposition manages to have the upper hand in the region, they will go further toward Latakia and drive Assad into a corner. While Kasab was under the control of the Syrian regime until the last two weeks, the Free Syrian Army (FSA) carried out operations to take control.
Last Update: Apr 09, 2014 10:07 pm
RELATED TOPICS