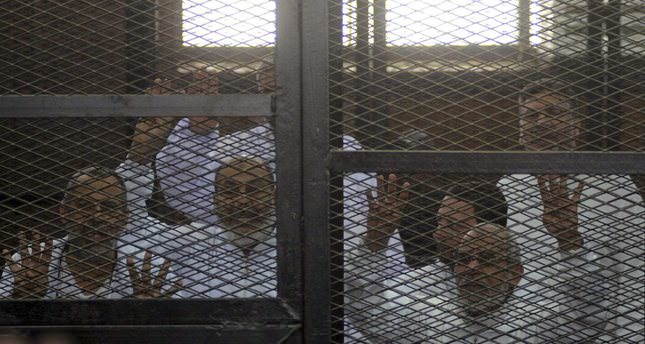 All parties in Parliament yesterday supported a joint declaration that expressed deep concern over the death sentences meted out to 529 people in Egypt. The declaration also included a call for the sentences to be reversed for the good of the country

ANKARA — All parties in Parliament yesterday supported a joint declaration that expressed deep concern over the death sentences meted out to 529 people in Egypt. The declaration also included a call for the sentences to be reversed for the good of the country.

Turkey's Grand National Assembly (TBMM) on Wednesday drafted a joint declaration that expressed Turkey's deep concern over death sentences handed down to 529 people in Egypt. Signed by the deputy chairmen of all political parties represented in the Parliament, including AK Party Deputy Chairman Nurettin Canikli, Republican People's Party Deputy Chairman Akif Hamzaçebi, Nationalist Movement Party Deputy Chairman Oktay Vural and Peace and Democracy Party Deputy Chairman Hasip Kaplan, the declaration urged Egypt's administration to reverse the sentences. While the word "condemn" was not included in the declaration, it was noted that developments in the country are being followed closely. "The joint wish of the Turkish nation is that these sentences - which may cast a pall on Egypt's struggle for democracy, as well as its hopes, dreams and future, and be remembered as a disgraceful event in the history of mankind - will not be implemented," the declaration said. The declaration said that the TBMM is united with the Egyptian public and sincerely supports its "Egyptian brothers' demands and expectations in terms of democracy, human rights, welfare and fundamental freedoms." The declaration also stated that Turkey believes Egyptians have the right and capability to define their own future without any external intervention.

The international community, including officials from the U.N., EU, the U.S. and human rights watchdogs such as Amnesty International, have condemned the death sentences. All the defendants, including 397 people being tried in absentia, faced charges of committing violence, in Minya in August 2013, following the violent dispersal by security forces of pro-democracy sit-ins in Cairo and Giza, which left hundreds of protesters dead.
Last Update: Apr 10, 2014 10:43 pm
RELATED TOPICS