Kılıçdaroğlu's attacker to be imprisoned 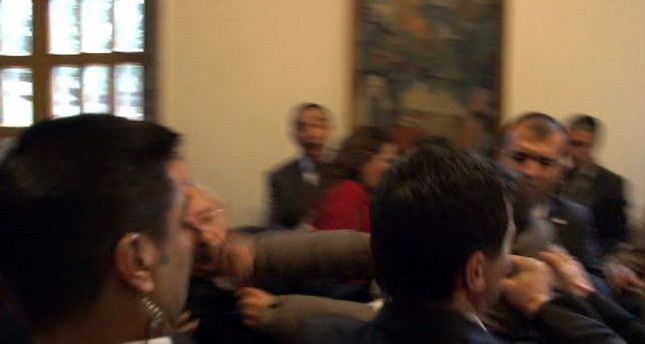 by Daily Sabah Apr 11, 2014 12:00 am
ISTANBUL — Orhan Övet, the attacker who punched the Republican People's Party's (CHP) leader Kemal Kılıçdaroğlu earlier this week prior to the party's group meeting, was sentenced to house arrest but his sentence was later changed to imprisonment on the grounds that he failed to abide by the legal conditions previously imposed on him for past offenses.

AK Party's Deputy Chairman Hüseyin Çelik on Twitter addressed Övet's association with the party, saying Övet was a member of the AK Party but was immediately expelled following the incident.

Noting the AK Party has over 9 million members throughout the country, Çelik said the acceptance of an individual with such an extensive criminal record was a serious case of "negligence" and wished Kılıçdaroğlu a speedy recovery on behalf of his party.

In his testimony at Ankara Police Department's Counterterrorism Unit, Övet said he punched Kılıçdaroğlu because he was "annoyed by him," he did not receive orders from anyone and acted solely at his own discretion. "Kılıçdaroğlu came to Elmadağ for a speech prior to the local elections and spoke against Turkey's national interests," said Övet, who was annoyed by his speech and decided to go to the party's group meeting at the Parliament, which is open to the public on Tuesdays. He also noted he did not use alcohol or drugs prior to the attacks, but used marijuana four days ago. Övet asserted he would file an official complaint against the people who harassed him after the attacks at the Parliament.

In response to Övet's statements that he would file a complaint against those who assaulted him, Ali Özgündüz, a CHP parliamentarian and a former prosecutor, said Övet should be thankful that he was not lynched. Gürsel Tekin, also the CHP's deputy chairman, claimed the attack was strategically planned to create provocation and said the party will investigate the issue.