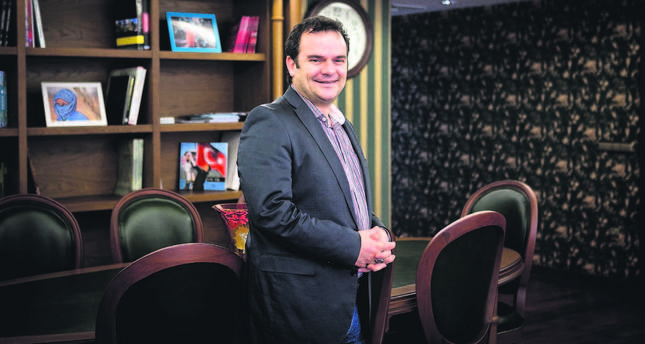 Established in 1920, Anadolu Agency has been operating since then as the oldest news agency in Turkey. In its 94th year, the agency has become one of the most important news agencies in the world with 80 international bureaus. Daily Sabah spoke to Kemal Öztürk, director general of the agency for his perspectives on not only his organization but also the state of the media in the Republic of Turkey

Daily Sabah: Tell us about bringing the voice of Turkey to the world.

Kemal Öztürk: Now, let's ask a very simple question: When the president or the prime minister of Turkey speaks, who translates the speeches and reports them to the international media? It was not us. And for the Arabic translations, it was not Arabs. That was an interesting point; all the reports in Arabic, French and English are done by western news agencies. While another country's agency reports our president's or prime minister's news to other countries, our news agency was reporting them only to our country, only in Turkish. That means we were reporting the Anatolian news to the Anatolian people. It was a self-enclosed, inward-oriented model of news reporting. But a globalizing country needs a globalizing news agency. Now, we have a news agency which reports in seven languages about our president, our prime minister or other leaders of the opposition parties to the world.

Two and a half years ago we redesigned our goals and set a new list of goals for the next eight years. For example, back then we had offices only in 15 or 20 countries. Our goal was to increase this number to 80 in eight years. Now, we have achieved this goal in two and a half years. We are also aiming to report in 11 languages. Now we already do reporting in seven languages (Bosnian, English, Arabic, Russian, Kurdish, French and Turkish). We are preparing to report in Albanian, which would make the number of languages eight. So we think we will implement all our objectives without waiting for the year 2020.

We classify the international news agencies based on the number of each news texts, the number of videos and the number of photographs that they produce and we reach a total number. We also consider the number of languages in which they produce news, and the number of countries where they have offices. We organize a scale based on this data. Two-and-a-half years ago, the Anatolian Agency were not qualified enough to be included in that list. But now we rank eighth and our goal is to be in the top five by the year 2020.
We are renovating our technological systems.

We also have renovated our staff with young, well-educated and bilingual people. Two-thousand- two-hundred people from 81 countries and 60 different nations are working with AA now.

This is a very high number and we have a news feed from all those countries. We are the number one news agency in the Middle East, the Balkans and the Caucasus region, which is the Ottoman hinterland. These are all important areas where we will be the best news agency for them, will be the best agency around the world.

- DS: How do you decide the languages you publish in or the countries you open bureaus in?

KÖ: It is not our goal to have AA offices in every country around the world. However, we do have a goal to be the most effective, the most important news agency inside the region. By that I mean the Middle East, the Balkans and the Caucasus.

So when there is breaking news in these regions, we want to be the source which people will go to. In other terms, we don't want to be a 500-bed-capacity hotel with a huge building, we want to be a small, classy and a high-quality 50-bed-capacity boutique hotel. That is why we won't open offices for example in New Zealand or cover every detail of the domestic news in Singapore.

We have an extended operational office with 60 people in Cairo, the Egyptian capital. We have other offices in Tunisia, Lebanon, Algeria, Marrakesh, Al-Quds (Jerusalem) and Gaza. We conduct heavy work in these offices. We assert that all news from the Middle East is suspicious if it is not reported by AA. We also rank first place in producing Arabic news. We have offices in Gaza, Ramallah and Al-Quds.

But we have a history of 400 years in the region.

So that makes our age something like 400 plus two. We can cover Yemen on the ground without any fear whereas other western sources might face safety concerns.

- DS: During the local elections period, Anadolu Agency received many criticisms regarding its broadcasting policy. How do you evaluate these criticisms?

KÖ: Anadolu Agency has a heritage of 94 years. The accuracy of our news is inarguable.

For instance, during court trials, when news from any newspaper is entered as evidence, the court waits for the expert opinion regarding the accuracy of the news. However, Anatolia Agency's news is accepted as evidence. AA's news has an evidencing statue by the court. And our news is also archived by the state. When we published incorrect news we immediately publish a correction afterwards. We do not wait for a refutation.

The number of refutations we receive is four or five each year. Claiming that AA is biased is equal to saying that AA betrays its 94-year-long heritage. People can be biased but the news itself has to remain objective. During the recent local elections, we received so much criticism but none of it can be proven with solid evidence. We do not have single biased or false news [piece] that we published while covering the elections.

We were criticized by favoring the ruling party more than opposition parties in our news but the truth is the number of news texts regarding the opposition parties published by AA is more than the number of the news texts related to the ruling party. We even published more news about the opposition parties than the TV channels or media outlets that are favoring them. Of course we try to cover all the activities done by the government or governmental bodies, for example ministries and such. But we cannot be blamed for not covering other parties or publishing biased news. Especially on social media sites, rumors fabricated about AA's journalism, but we have a strong journalistic ethics that we very much pride ourselves on.

- DS: Two of your international editors published a letter full of claims after they left your agency.

KÖ: Let me tell you from the beginning. We published a job advertisement on The Guardian, the British daily, which received many applications. We picked 10 of them and invited them to tentatively work for us in Ankara. After two months, those two editors left for Britain and announced their resignation to us via e-mail. Everything happened very abruptly. We were shocked because none of them spoke about the issues they mentioned in their article before, despite the fact that we had meetings with one another. Then we started a legal process because they have a certain responsibility to our agency by the law. Later on, these people published an article full of defamation, which was also too perfectly constructed according to the anti-government ideology to fill the appetite of some certain parties, claiming that we harbored spin doctors for the ruling party, that I had registered the shares of the agency under my name, and many other groundless slanders. We got in touch with the website and asked them to remove the article that is nothing but a smear campaign.

The web sited denied our request. Our editor in chief - who was also in charge of those two people - wrote another article titled "Why I am proud to work for Anadolu Agency." So we applied to the same web site to publish this article.

Since they already published a controversial article by our ex-employees, they have to publish another one by our current employee. The website denied us again.

Of course anti-government circles used this article, which has been proven incorrect heaps of times, to flare up their own defamation campaign not only against the ruling party but also against our agency. Frankly, these two ladies were left behind by the rest of the team and had been warned regarding their performances. We have employees from 60 different nations, and none of them had done such an act before or after the article. We started the legal process. We will file cases against them both in Britain and in Turkey.

What really upset us is that the slanderous claims of those two editors are tightly embraced by Turkish journalists and media outlets; even though they know the real story behind and know the claims are proven wrong. Some of them refused to publish a correction even though we requested it. We also started a legal process regarding those acts. Anadolu Agency has started to cross boundaries and change the balance around the world from the Middle East to North Africa. We know it is only natural to receive criticism and even defamation throughout this process. Nonetheless, AA will keep its stance through all this and continue to grow to achieve its goals and to take Turkey to new horizons. On the elections night we received many congratulatory phone calls from all around the world. We are pleased with our current growth. Last week Prime Minister Erdoğan congratulated us on the 94th anniversary of our agency. He also expressed his pleasure over Anadolu Agency's development and that we carry Turkey's voice to the World.

- DS: Turkey has received a lot of criticism from international circles regarding the freedom of press. What would you say about this as a journalist?

KÖ: The claims regarding the lack of freedom of press in Turkey are nothing but a lie. Just lay the newspapers edge to edge and take a look at the headlines; you will see many with slanderous attacks against the prime minister himself and even to his family. Media outlets, one after another, carry insults against the prime minister that you cannot see any other example of this kind of low language in any other country.

In Turkey people can write whatever they want.

Besides, you cannot mention a dictator in a country if there is a legitimate ballot box there. You cannot call it a dictatorship if the people of the country keep voting for the same name willingly.

DS: What do you think about English publications in Turkey?

KÖ: In my opinion Turkish media is too self-enclosed, too introverted. It is like dead water which produces its own microbes after a while. In fact, all of these incidents are an indicator of that rottenness. Since we do not have an international extension, we cannot interact with the world. The media is intensely focused on the domestic sphere, which is a serious problem. I know that a Turkish newspaper in Arabic or English would be highly appreciated in the Middle East. A Turkish newspaper in French would be highly appreciated in Africa. So I highly consider the Daily Sabah project and I know your newspaper closely since you are also one of our subscribers. I also consider it as a school to train journalists at the international level. I consider it as a reflex or extension to the world. I hope that other Turkish institutions will also publish newspapers in international languages. As Anadolu Agency we also encourage them to generate news in other languages. We consider it a serious investment for the future. I believe people around the world should read news about Turkey on Turkey-based newspapers, not on other international newspapers.
Last Update: Apr 14, 2014 10:50 am