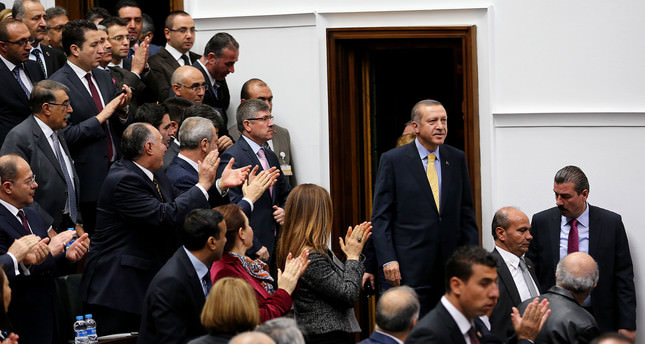 by Ali Ünal Apr 14, 2014 12:00 am
ANKARA — Government officials have been working on a comprehensive anticorruption action plan as part of the new democratization package which will be announced in the coming days, according to sources in the Justice and Development Party (AK Party) and the prime ministry.

The plan has included legal amendments on providing more transparency and accountability in various areas. In the action plan there are also measures regarding financing politics specifically aimed at improving transparency in election campaigns in line with the similar practices in the U.S. and Europe.

Accordingly, during the election campaign, mayoral and parliamentary candidates will be required to open an "election account" and collect all their donations into a single account. Moreover all the transactions of the election accounts will be transparent and the accounts are expected to be under inspection of the representatives of the political parties. The regulation also imposes a new limit on donations to political parties, mayor and parliament candidates.

Thus political parties will be able accept donations of up to TL 100,000 from one person but individual candidates will only be able to accept about TL 50,000.

Additionally donors will be announced publically on political parties' websites just as in the U.S. and many European countries. The anti-corruption action plan also includes measures to prevent corruption in the public sector. In order to reach this goal the action plan offers measures to protect public officials who report corruption and bribery. Whistleblowers will be rewarded and they may be allowed a leave of absence up to three months and will be free to transfer to another institution if necessary.

The ruling AK Party had set "fighting against corruption" as one of its main missions, hence the word justice in the party's name. Therefore the recent corruption allegations present an existential threat, not only for Prime Minister Recep Tayyip Erdoğan but and also for the political movement that he represents. Officials behind the anti-corruption measures are aiming to prove that the government is determined to address corruption claims and that they are not left unanswered in the eyes of public opinion. In line with these measures, Erdoğan has continuously touched upon the issue of corruption and stated that his party will fight corruption as promised when it first came to power in 2002.

Moreover, the track record of the AK Party with regards to fighting against corruption is promising. With respect to this matter, Finance Minister Mehmet Şimşek stated last week that the AK Party government has combated corruption and proven very successful in doing so. In his speech at the International Investment Summit in Istanbul last week Şimşek dismissed the recent corruption allegations, saying, "The ruling AK Party government has combated corruption and has been very successful.

That is why the Turkish people didn't buy those politically motivated corruption allegations." Şimşek also noted that Turkey has fallen in the rankings of corruption indexes since the AK Party came to power in 2002. While in 2002 Turkey was 64th in the Transparency International index out of 102 countries, in 2013 it ranked 53rd out of 177 countries.
RELATED TOPICS