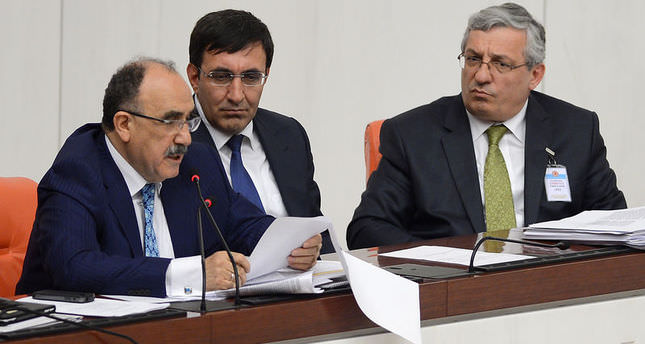 After Turkey's controversial intelligence bill was brought to the Turkish Parliament's agenda yesterday, national intelligence sources spoke to Daily Sabah regarding the scope of the bill

ISTANBUL — A draft bill to restructure the Turkish National Intelligence Organization (MİT) was introduced in the Turkish Parliament once again after it was proposed by the ruling AK Party in February. Even though it was close to being approved last week, disputes between the parties caused a delay in approval. The proposed draft bill aims to broaden the intelligence organization's reach following the black propaganda and smear campaigns against the organization carried out by the Gülen Movement, which infiltrated key governmental bodies.
Raids on MİT trucks en route to Syria with humanitarian aid in January were among the main motives of strengthening Turkish intelligence.
The bill gives MİT the authority to conduct operations in the fields of foreign security, counterterrorism, national security, cybersecurity and eavesdrop on international and pay phone calls. It also introduces a jail term of up to nine years for the publication of the MİT's classified documents if leaked to media outlets. It also paves the way for the MİT to reach out to terrorist organizations that are threatening Turkey's security.

The ruling AK Party, whose deputies sponsored the intelligence bill, maintains proposed changes to the law will improve the MİT's capability to compete with foreign intelligence agencies by expanding its mandate and adding to the list of methods and sources available to the intelligence community.

However, opposition parties remain critical of the bill, asserting that certain amendments to existing legislation may pave the way for violations of citizens' privacy and present an impediment to press freedoms by stopping the publication of intelligence documents.

Critics also claim that the agency may abuse its extended powers, effectively transforming Turkey into an intelligence state.

In February, AK Party Çankırı Deputy İdris Şahin said the main aim of the bill was to meet the necessities of today's world and uphold the technical and individual capacity of agency, whose codes enacted in 1984 and have not changed since then. "This draft bill will grant MİT the authority to conduct other operations apart from the ones abroad," said Şahin, vowing to increase the agency's efficiency.

Speaking to Daily Sabah on the scope of the bill, intelligence sources said, "Examinations regarding the intelligence agency's structure have been continuing for two years and after the comprehensive evaluation of EU intelligence agencies, it was found out that EU agencies have broader terms of reference than Turkish intelligence. This is why the necessity arose to broaden its scope."

The sources said the intelligence bill would bring the agency to equal the capabilities of EU intelligence agencies such as the Netherlands, the U.K., and France and increase its methods for individual and technical intelligence.

They noted the confidentiality of the MİT would ensure state security and the amendments were based on international legal norms and current intelligence applications across the world. Noting similarities in intelligence throughout the world, the sources said 10 years imprisonment may be given to those who reveal or leak the state's secret information in Germany, the U.K., U.S., Bulgaria, Czech Republic, the Netherlands, Switzerland and Italy.

The bill also aims to take measures against removing MİT personnel based on unfounded allegations. According to the draft bill, public prosecutors may try the head of MİT only with the prime minister's permission.

One of the articles of the draft bill is expected to prevent legally unsupported summons to be issued against agency's personnel as occurred on Feb. 7, 2012.

In Turkey, other intelligence agencies have been serving under the Turkish police and gendarmerie, in addition to the MİT. While MİT is authorized for operations abroad, the police and gendarmerie agencies are authorized domestically. The introduced draft bill is expected to allow the MİT to conduct operations inside Turkey's border.
Last Update: Apr 15, 2014 2:15 am
RELATED TOPICS