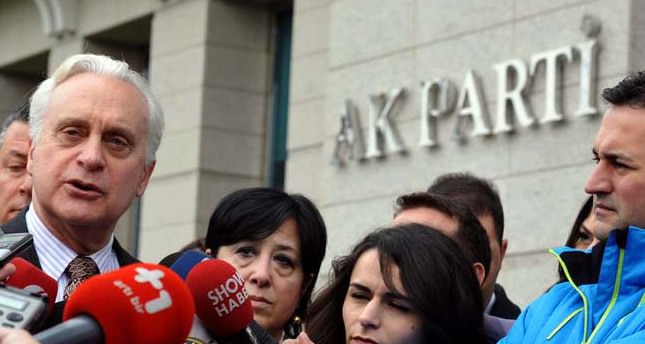 The U.S. ambassador, in a meeting with a top AK Party official, says the government is justified in its anger at the Gülen Movement's illicit activities

ISTANBUL — U.S. Ambassador to Turkey Francis Ricciardone visited the Justice and Development Party (AK Party) headquarters in Ankara yesterday, the first such meeting between the American envoy and a top government official. AK Party Vice President Mehmet Ali Şahin received the ambassador and held a meeting with him. The meeting was held behind closed doors and no press was allowed access.

Following the meeting, Şahin and Ricciardone stated that the meeting was beneficial for both sides.

"We discussed some regional topics, including Syria, Ukraine, Iraq, Iran, Israel and Palestine. We also talked about the Armenian genocide bill. Our meeting was directed with the interests of both [the] U.S. and Turkey," the ambassador said, adding that it was a regular meeting. Upon a question about the controversial imam Fethullah Gülen, Ricciardone said, "We distanced the meeting from Turkey's domestic policies. Our priority was only Turkey and the United States' interests." He added that he congratulated Melih Gökçek who was elected as Ankara's mayor in the recent local elections. The ambassador also met Yasin Aktay, who was recently appointed the AK Party's vice president of foreign affairs.

Turkey and the U.S. cooperate on several issues, including terrorism. The Turkish Foreign Ministry told Daily Sabah that Turkey and the U.S. will be organizing operations against the Islamic State of Iraq and the Levant (ISIL), which has become one of the biggest threats in Syria for both the legitimate Syrian opposition and Turkey. ISIL, which was established in Iraq as a branch of al-Qaeda in 2006, got involved in the civil war in Syria by siding with opposition groups at the beginning of the conflict. However, the group later increased its attacks on civilians and began undermining the legitimacy of the struggle against the Assad regime in Syria. Sources in the region say Syrian oil reserves are largely controlled by ISIL and sold illegally. It is still a mystery as to where the group's funding comes from and how it became so effective in the region. However, al-Qaeda has distanced itself from ISIL and declared the official al-Qaeda branch in Syria to be the Nusra Front. Following this announcement, ISIL also declared its separation from the al-Qaeda.

Sources say that ISIL is a growing threat not only for Syria but also for Turkey's southern provinces, as the organization considers Turkey an enemy. The same sources also say that the U.S. and Turkey will increase cooperation against the group, as ISIL attempts to control towns near the Turkish border.

Ricciardone's visit to the AK Party's headquarters amid allegations that U.S.-Turkey relations are fragile due to some of Prime Minister Erdoğan's policies is a significant step for the future of the two countries and their sustained relationship.

According to the information acquired by Sabah's correspondent Eda Işık from AK Party sources, Ricciardone expressed the U.S. government's displeasure regarding the Gülen Movement's wiretapping scandals and the movement's leaking of the top secret meeting held at the Ministry of Foreign Affairs.

Riccardione said the Turkish government is right to feel uncomfortable with the illegal activities of the movement.