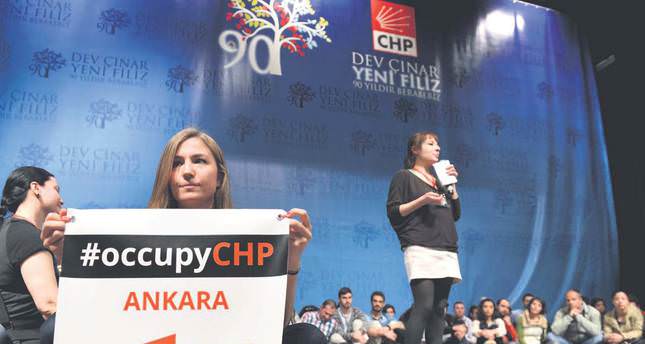 A defeat in the March 30 local elections, coupled with the current CHP leadership's failure to come up with a vision that could provide a viable alternative to the ruling AK Party, causes some youth groups to march to the party's Ankara headquarters and demand a remedy for the slide into irrelevance

ISTANBUL — Opposition among the Republican People's Party (CHP) is growing as factions within the party come together to criticize the party's shortcomings and deficiencies in the current administration, especially after the March 30 local elections were deemed by many to be a failure for the party. While a group of young individuals has recently organized through social media to "occupy CHP," parliamentarians around the country convene to outline the reasons that led to the CHP's poor performance in the local elections. On April 12, about 890 people signed up to support those gathered in front of the CHP headquarters in Ankara to attend a forum to encourage young people to get involved in the party and express their concerns. The group was apparently organized through social media, making it a grassroots movement. The youth were welcomed by İrfan İnanç Yıldız, the CHP's Youth Coordinator and a number of parliamentarians and party members. Surveys were conducted asking the youth their opinion on what they would like to change about the party.

Özgür Özel, CHP parliamentarian from Manisa, expressed that they previously wanted to "occupy" the CHP but were restricted by a number of factors. Noting the fact that the CHP has a low number of young members and parliamentarians, Özel said this would be the first step to ensure that young people take part in the CHP, as he explained criticism alone was not sufficient to address the issues within the party and that it was crucial take concrete action to start seeing results. On the other hand, Ceren Aral, the spokesperson for the youth movement, stated that the term "occupation" does not have negative connotations in this context and has positive implications for the party, as they were welcomed by the party. Aral also claimed that as youth they will strengthen the party through constructive criticism.
Sources claim that about 99 percent of the participants were not affiliated with the CHP's youth branches or members of the party, and were disturbed by the party's poor performance in the local elections, hence their attempts to challenge the archaic structure of the party.

On the other hand, a number of CHP parliamentarians including Nur Serter from Istanbul and Birgül Ayman from İzmir recently attended the "National Awakening" conference to discuss the reasons why the CHP lost the March 30 local elections. The conference came up with a number of significant conclusions and addressed the party's dwindling voter base and the wrong attitude and methods adopted by the party in the local elections and in general. Touching on the fact that there are non-political reasons why the AK Party received the most number of votes, Nur Serter stated that CHP voters are mainly located in the western Marmara, Aegean and Mediterranean regions, where fertility rates are on the decline; whereas in eastern Turkey, where the AK Party secured a significant number of votes, fertility rates are four times higher.

Serter also touched upon the idea that the AK Party was successful in the local elections because it embraces everyone regardless of who they are, whereas the CHP's current policy is exclusionary and wrongly discriminates against its own members in efforts to be unbiased, ruining the motivation of its members.

Birgül Ayman Güler also noted that the reason why the CHP performed poorly in the elections was because the party is deviating from its principles and the results were extremely disappointing. Criticizing the party's cooperation with the Gülen Movement during the elections, Güler stated that the party has wrongly cooperated with all elements damaging the party and explained it was very unfortunate for the party to seek support from such harmful groups. Güler also criticized his party for choosing to campaign with unlawfully recorded tapes, which he claimed was not only a blow but also undemocratic.

A number of opposing factions within the CHP have recently issued a "report card" for the party's administrators and called for their resignation at the party's general assembly meeting. Administrators have been criticized for mismanagement of funds, adoption of poor policies and methods, nepotism and idleness, which all contributed to the party's loss in the local elections.
RELATED TOPICS