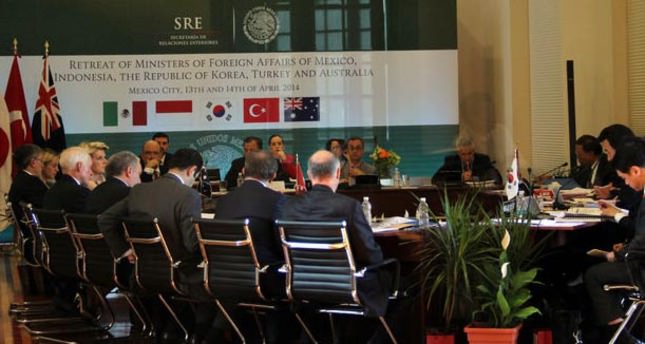 by daily sabah
Apr 15, 2014 12:00 am
MEXICO CITY — Turkish Foreign Minister Ahmet Davutoğlu made numerous sharp comments about the situation in Ukraine and Syria following an unofficial meeting with foreign ministers on Monday.

In unofficial meeting with foreign ministers from Mexico, Indonesia, South Korea, Turkey and Australia, in Mexico City, Turkish Foreign Minister Ahmet Davutoğlu said, "The Ukraine problem is very important for us as it is another neighbor and friendly country. It is important to establish stability in Ukraine, however, it is difficult to find a solution for the international community, who have turned a blind eye to casualties in Syria."

'Striving to draw attention to the Syrian crisis'

Davutoğlu was asked if he had any expectations with regards to bringing an end to the Syrian war.

Davutoğlu stated that the Syrian crisis is at a critical stage and the Geneva II Conference failed to lead to its desired results. Turkey's FM said "Lastly, we are receiving serious news indicating that the chemical attacks are being repeated in both Hama and Aleppo. We are trying to mobilize the international community. We are striving to draw attention to the Syrian crisis."