Delegation of US representatives visit Ankara 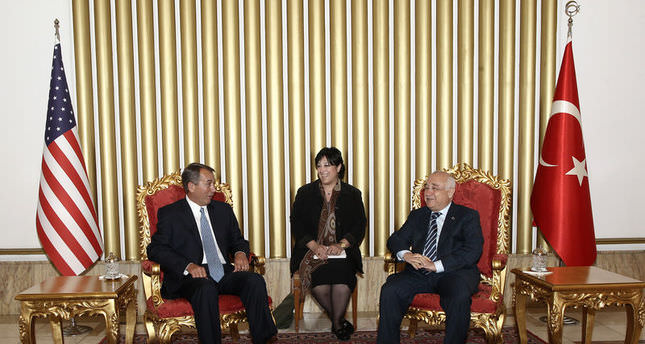 U.S. House of Representatives Speaker Boehner meets with top Turkish officials and assures Turkey that there was no chance the Armenian genocide bill would pass

ANKARA — A delegation from the U.S. House of Representatives took part in a series of bilateral meetings yesterday in Ankara. The U.S. lawmakers, led by U.S. House of Representatives Speaker John Boehner, were received by Parliament Speaker Cemil Ciçek. Çiçek and Boehner talked about the Armenian genocide bill that increase tension between the two countries. Boehner later met Prime Minister Recep Tayyip Erdoğan in a meeting closed to the media and the delegation was expected to meet with President Abdullah Gül late last night.

Congress, Çicek said, "Parliaments should build the future today and should leave history to historians. We are ready to confront our history. Scientists, historians, whoever knows anything and whoever has something to say should investigate this matter. If the parliaments began to make decisions on historical events, this may harm bilateral relations and friendship." Boehner emphasized that representatives involved in the resolution are lawmakers and not historians. Pointing to his 24 years career in the House of Representatives, Boehner said that Armenian genocide claims popped up on the agenda of the lower house from time to time. "Our congress will not get involved in this issue. We are not writing history. We are also not historians," said Boehner.
RELATED TOPICS