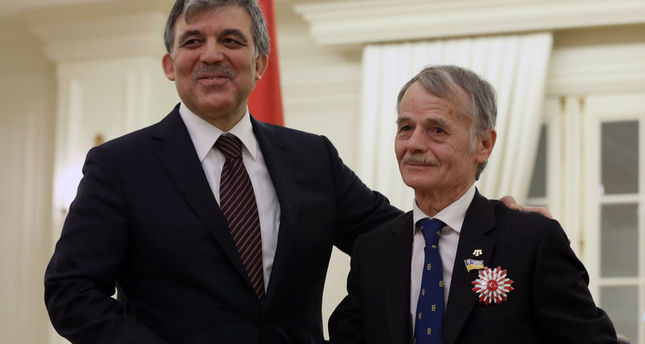 Also in attendance were foreign representatives and historians. The occasion began with the announcement of the official reasons outlined by the Council of Ministers why Kırımoğlu was awarded with the order.

According to the Council of Ministers, Kırımoğlu greatly assisted the development of amicable relations between Crimea and Turkey and drew the two nations together.

Gül said he thought about conferring Kırımoğlu with the medal about two years ago and made suggestions to the Ministry of Foreign Affairs and the Council of Ministers on the grounds that Kırımoğlu made significant contributions to the national struggle of Crimean Tatars.

Gül noted the procedures to confer the medal took a long time and when they were finalized last year Ukraine was experiencing a tumultuous period. "But the crisis has not ended and we decided it is about time to confer this medal to Kırımoğlu," said Gül, who referred to Kırımoğlu as a great hero and a great figure. Gül also said he was honored to present Kırımoğlu with the order as he took significant initiatives to present the rightful claims of Crimean Tatars to the world. Gül said the future holds great opportunities for Crimean Tatars and their national interests as long as they follow Kırımoğlu's respectful and peaceful attitude toward resolving the conflict. During his formal speech at the ceremony, Kırımoğlu expressed that the Crimean Tatar community was going through an extremely difficult period as the Crimean Peninsula is now occupied by Russian forces. Criticizing Russia's policies, Kırımoğlu noted Russia took advantage of the crisis in Ukraine and deployed its tanks to Crimean soil, an unexpected incident for Crimean people. He also touched on the fact that the previous Ukrainian regime employed discriminatory policies and the new one also failed to address the needs and demands of the Crimean people.

Kırımoğlu referred to 1944, when hundreds of thousands of Chechens, Tatars, Crimean Tatars and Meskhetian Turks were deported from their homes throughout the region while the world turned a blind eye to their suffering and emphasized the international community should not adopt the same attitude now. "We hope that this occupation will not last long and Crimea will be free," said Kırımoğlu, who expressed Crimeans were pleased to see the Turkish Republic take a decisive stance on their behalf during the crisis and lend a helping hand to Ukraine.

Kırımoğlu also expressed his gratitude for being awarded the highest order of Turkey and said it was a morale booster for Ukraine and the people of Crimea.

Crimean Tatars were subjected to deportations and forced migrations following World War II at the hand of the Soviet Communist regime. Hundreds of thousands of Crimean Tatars were exiled to Uzbekistan, Romania, Bulgaria and other places in the region and subjected to mistreatment. Many like Kırımoğlu spent a significant amount of their lives in prisons, exile or labor camps.
RELATED TOPICS