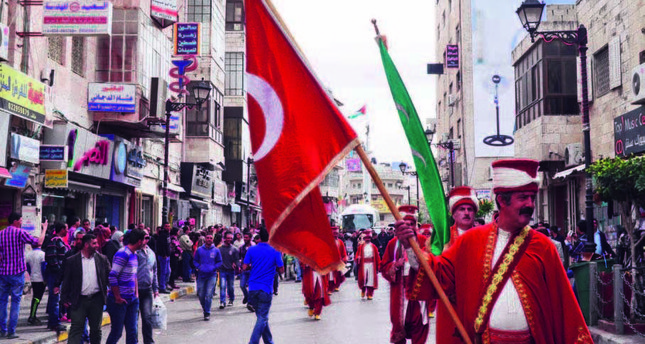 The Turkish International Cooperation and Development Agency, which has been involved in renovation projects in Palestine, revives the long-forgotten Nabi Musa Festival dedicated to Prophet Moses in Jericho

JERUSALEM — Spending four days in Palestine as a Daily Sabah correspondent, I had the chance to observe the activities of the Turkish Cooperation and Coordination Agency (TİKA) and the ever-increasing tense relations in the region. Our first destination, as part of TİKA's initiative to revive the long-forgotten Nabi Musa Festival dedicated to Prophet Moses, was Jericho. Next, we visited the opening ceremony of Masjid al-Aqsa's (al-Aqsa Mosque) archive building containing documents from the Ottoman Empire, Then lastly, we watched the historic janissary marching band demonstration in Ramallah sponsored by the Turkish Ministry of Culture. The band's next stop was Nablus and Jerusalem, but unfortunately we had to give that a miss.

The Nabi Musa Festival dates back to the year 1187, during the rule of Salahuddin al-Ayyubi, better known in the West as Saladin. Founder of the Ayyubid dynasty, he was the first sultan of Egypt and Syria. The seven-day long festival celebrated annually by Palestinian Muslims and centered around a collective procession from Jerusalem to what is thought to be the tomb of Prophet Moses, near Jericho, emerged in an endeavor to show the might and prominence of the Muslim empire during the season of Christian pilgrimage. The celebrations included tribes and caravans coming with banners and weapons while chanting songs at the Nabi Musa Mosque in Jericho.

Usually, thousands of soldiers and even artillery were deployed by the Ottoman Empire to keep order in the narrow streets of Jerusalem during the procession. However, when the Ottomans withdrew from the region, the Nabi Musa Mosque became a rally point for demonstrators and social gatherings. Hence, following the invasion of Jerusalem in 1967, the occupying Israeli authority banned the festival. An Ottoman janissary band marching through the streets of Jericho once again after almost a century for the first time since 1917 was a highlight of the festivities. The band's first concert in Jericho attended by an exhilarated crowd of hundreds. The festival was attended by thousands of viewers. The passion and happiness in the eyes of the Palestinians was evident. After the concert, Turkish parliamentarian Murat Yıldırım gave a short speech with an emphasis on the brotherhood between Palestinians and the people of Turkish. Beginning his speech with greetings from Turkish Prime Minister Recep Tayyip Erdoğan, Yıldırım stressed that Turkey's AK Party government supports the Palestinian cause. He concluded by saying he is confident that the declaration of a free Palestinian state is close and that Jerusalem will be the capital of this government.

Similar to many other cases, the Israeli government did not provide a rationale for banning the festivities. Thus there is some guesswork surrounding the reasons behind the decision. The most logical and convincing argument seems to be the protests during the 1920 Nabi Musa festivities organized during the British invasion. Protests beginning with the festival grew into a social movement that resulted in the arrest of over 200 protestors, 39 of which were Jewish.

Palestinians rallied in subsequent Nabi Musa Festivals to protest the Israeli occupation of Palestinian soil. After that, the occupying Israeli authority banned the festival in 1967. The archive of handwritten works at al-Aqsa Mosque was opened in the presence of Sarnıç, Yıldırım, Çam, Mahmat and al-Aqsa Mosque Foundation Director Sheikh Abdulazim Salhab.

TİKA arranged for the provision of necessary materials and infrastructure to preserve and protect the historical remains kept under poor conditions. Çam made the opening speech and said a TİKA committee visited the Jordanian Ministry of Foundations, with which the al-Aqsa Mosque Foundation is affiliated. "We told them we wanted to do a lot more for al-Aqsa Mosque," said Çam. "Every Muslim group that comes here represents millions of Muslims. We are trying to find solutions to the problems of the Palestinian people. I believe that Jerusalem and Gaza need particular support. While walking here with one of our parliamentarians, we came across the Dome of Mi'raj. Parts of the dome were damaged and clearly in need of restoration. If it suits you, with your permission, TİKA is prepared to do all that is necessary [to take care of the repair work]."

The most colorful persona of the event was the Sufi parliament leader Muhammad Ismail al-Jamal, who is also the 45-year preacher of al-Aqsa Mosque. He said he only stopped by because he heard we were visiting from Turkey.

He noted how the people of Palestine are yearning for the 400 years of peace that was achieved by the Ottoman Empire.

The janissary band that marched in Ramallah with flags was accompanied by Mahmat. The crowd sung with the band as they played Arabic anthems at al-Manara Square.

The band's final destination was the site of the legendary fallen Palestinian leader Yasser Arafat's military base.

Mahmat said, "We will continue to advocate for the mutual values of our people. The important thing here is leaving a mark on history and we are very happy that we are able to do this."

TİKA, a soft power and the face of Turkey in the region - and organizer of many projects such as building schools and hospitals in the West Bank, Jerusalem and Gaza - is rewarded with great love and admiration from the Palestinians.

Erdoğan is a true celebrity in the region and has a phenomenal fan base. At every mention of the Turkish prime minister's name, the crowd chants, "Erdoğan!

Erdoğan!" and an applause breaks out.

Regardless of the admiration and respect for Erdoğan, the Palestinians do not consider themselves the "little brothers" of the "big brother" Turks. On the contrary, the leaders of Palestine long for the day they stand on their own feet on their path to a free Palestine.
Last Update: Apr 16, 2014 9:37 am