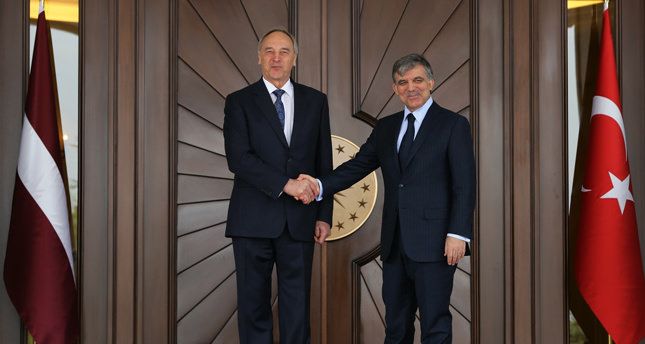 by AA Apr 17, 2014 12:00 am
ANKARA — Turkey's Parliament Speaker Cemil Çiçek is hopeful that new chapters will be opened for negotiation when Latvia takes over the European Union's presidency in 2015.

"Hopefully we will make some progress in the EU accession process, which has been going on irregularly and at a snail's pace. We appreciate Latvia's support regarding Turkey's EU membership and hope to get the chance to open some chapters for negotiation under Latvia's presidency," Çiçek said Wednesday during a meeting with Latvian President Andris Berzins, and Latvian Foreign Minister Edgars Rinkevics.

Noting that no other country has waited so long, 50 years, to gain membership status, Çiçek stressed that Turkey's EU membership would benefit both parties.

"We won't bring a burden on Europe, but opportunities. No other country could make the contributions [to EU] that Turkey could. We hope that this will be realized soon and we can have some reasons to feel optimistic regarding the current relations between Turkey and EU which have almost frozen," Çiçek said.

The parliament speaker also called on the EU to keep its promise made April 26, 2004 regarding Cyprus.

"What we expect from our European friends is that they put an end to the unfairness against Turkish Cypriots that has happened ever since the Greek Cypriots voted against a resolution of the crisis in a referendum. The Greek side just keeps dragging their feet. You have got embassies there. When you make an official visit, please make sure to invite the Turkish Cypriots too, or better yet visit the Turkish side as well. This would be an encouraging step. The EU should not act as a stooge for the Greek Cypriots' games," Çiçek said.

Berzins said that he understood Turkey's concerns regarding the EU membership process and expressed his hopes that they could achieve much more progress when Latvia takes over the presidency compared to the progress made in the last 50 years.

"We have always supported Turkey's EU membership. We will do our best to accelerate the negotiations during our 6-month presidency term," Rinkevics added.