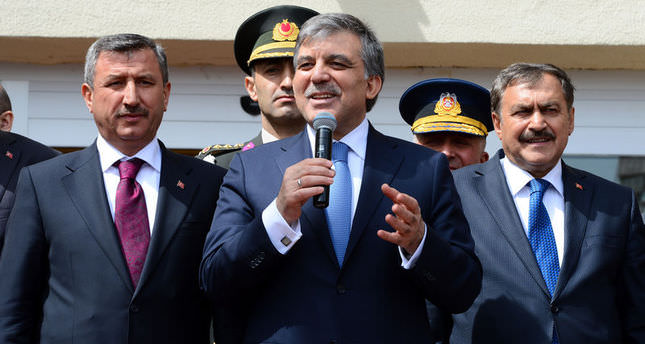 by Daily Sabah Apr 18, 2014 12:00 am
ISTANBUL — Speaking during a visit to Kütahya, Turkish President Abdullah Gül yesterday commented on the upcoming presidential election and his political plans for the future after speculation that he will be prime minister if current Prime Minister Recep Tayyip Erdoğan runs for president.

The agenda is dominated by the presidential elections, the first in which the president will be elected by a popular vote.

Gül said the debate is natural since Turkey is a participatory democracy. "The presidential processes will start after candidates are announced, but because of on-going speculation, I would like to say that I served in each governmental echelon with a huge honor but I have no political plan for the future," said the president, aiming to end the speculations over his further political moves.

Gül said that he believed the presidential elections will take place in a peaceful atmosphere and there will be no crises or uncertainties like Turkey experienced in previous elections.

Referring to a question if a "Putin-Medvedev model" might be conceivable, Gül said such a formula would not be "appropriate" for Turkey. Russian Prime Minister Dmitry Medvedev was appointed in 2012 by president and former prime minister Vladimir Putin.

A similar dilemma presented itself to Vladimir Putin in 2008 in Russia, where the constitution barred him from a third consecutive term as president. Putin instead backed his former campaign manager, Dmitry Medvedev, for the job, and when Medvedev won, he appointed Putin prime minister. Putin returned the favor four years later, when he won the presidency again. But on Friday, Gul appeared to cast the idea of a taking part in similar swap.

When asked whether his comments are signs of his candidacy for the presidency, Gül said, "My duty limits me to speech on certain subjects, but I am not independently involved in politics and I was not elected as the president independently, either. Therefore, we will discuss and decide on this issue together with my friends [AK Party members]. These are all transparent subjects."

Participating in his party's Extended Provincial Chairmen Meeting, Erdoğan commented on Gül's remarks, saying, "I did not hear it and I cannot comment on anything before talking with my president [Gül]."