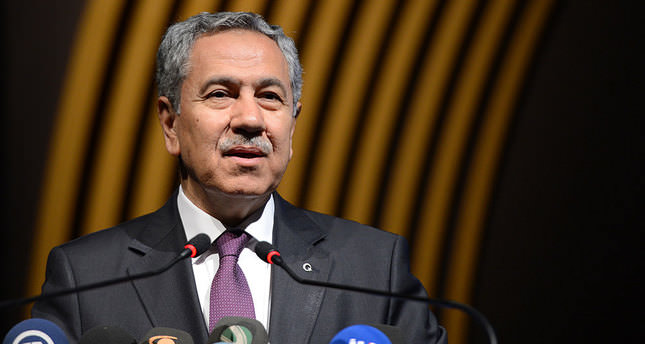 by AA
Apr 19, 2014 12:00 am
BURSA, Turkey — Turkey's Prime Minister Recep Tayyip Erdoğan may make his final decision on whether or not he will run for president in the upcoming elections in the middle of May, his deputy, Bulent Arınç, said on Saturday.

"We hope that he will announce his decision in the middle of May after discussing the issue with President Abdullah Gül," Arınç told journalists in the northwestern city of Bursa.

Turks will go to polls on August 10 to choose their new president. If no candidate receives the required 51 percent of the votes in the first round, a run-off will be held Aug. 24.

"We believe that if Erdoğan wants to run for president, Gül will feel honored and will support his candidacy," Arınç said.
Gül's seven-year tenure will expire on Aug. 28.

Deputy Prime Minister Emrullah Işler previously said a lawmaker from the northeastern Bayburt province may resign to open way for Gül to become a member of parliament and eventually prime minister. That would clear the path for Erdoğan to run for president.

The formula is similar to that used by Erdoğan to take over the prime minister's office from Gül in 2003, when Erdoğan could not be a lawmaker due to a political ban. After the ban was lifted, Erdoğan won a seat in parliament from Siirt province thanks to a re-election in the province. Gül then resigned as prime minister and was succeeded by Erdoğan.

"We will elect our new president by people's votes at the end of August. We hope we all will also celebrate another AK Party victory in 2015's general elections," Arınç said.

Turkey will for the first time in its history be able to choose its president by direct vote.

In a constitutional referendum in 2007, more than two-thirds of Turkish voters cast their ballots in favor of electing the president by popular vote instead of by parliament, decreasing the presidential term from seven years to five, and allowing the president to run for a second term.

With regards to Turkey's electoral system, Arınç said, "We will lower the current 10 percent election threshold by holding negotiations."

As Turkey leaves behind the March 30 local elections, the incumbent AK Party has prepared a draft bill on a new electoral system, which could change the election threshold, the minimum share of the vote a political party requires to secure any representation, ahead of general elections next year.

Three alternatives were proposed in the democratization package: maintaining the 10 percent threshold, reducing it to 5 percent, or removing the threshold altogether and fully implementing the single-member district system.