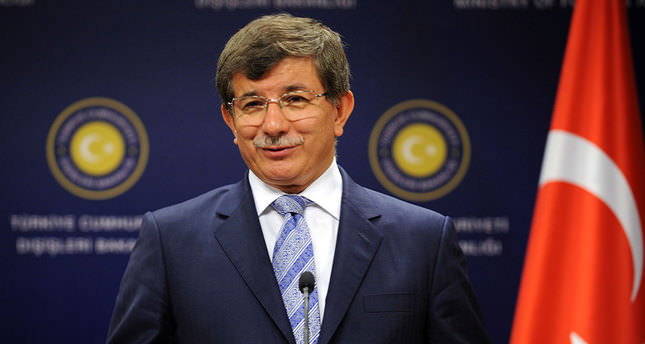 by AA Apr 19, 2014 12:00 am
ANKARA — Turkey's Foreign Minister Ahmet Davutoğlu has rejected claims by Syrian President Bashar Assad that three-year war in his country is turning in the regime's favor.
Davutoğlu said in a televised interview on Friday that the Turkish government had previously made friendly suggestions to Assad to undertake necessary reforms on behalf of the Syrian people in order to stop the uprising in 2011.
He said the situation on the battlefield was different to what Assad had claimed in his statements, and stated that the Syrian opposition had taken control in Keseb and in Aleppo.
Davutoğlu also said it was understandable that Assad's forces had control of Damascus, as the regime used hunger as a weapon.
"Is it possible for a man who massacred his own people to take control of these events?" Davutoğlu asked, adding: "Assad is dreaming."
According to Syria's state news agency SANA, Assad said that Syria's three-year conflict was at a "turning point" due to the regime's military supremacy over the rebels.
The Syrian regime had killed more than 100,000 people and created 2.5 million refugees in three years, according to U.N. data.
The Foreign Minister also discussed the significance of the crisis in general world terms, saying it would be right to accept there was a crisis in the international system, rather than considering events in isolation.
"If a progress in Syria had been made early, the world would have prevented the coup in Egypt," Davutoğlu said.

Referring to domestic affairs, when asked whether there had been any concrete findings concerning the ongoing investigation into the leaked recordings of a high-level security meeting of Turkish officials relating to Syria, Davutoğlu said: "There have been some findings, but they have not reached a point where they can be shared with the public."
When asked if he would emerge as prime minister after the presidential election scheduled for August 2014 if incumbent PM Erdoğan runs for the presidency, Davutoğlu reiterated that he would support Erdoğan for the position, but ruled himself out of discussions concerning the prime ministerial role.
"He who will be able to address the Turkish people's common sense will win the presidential elections," Davutoğlu added.
Erdoğan will decide on whether to run for president or not after discussing the issue with the incumbent head-of-state Abdullah Gül, who could serve as prime minister if Erdoğan is elected to the presidential post.
Earlier on Friday, Gül said he had "no future political plans" regarding the situation.
The Turkish presidential elections are scheduled for August 10.