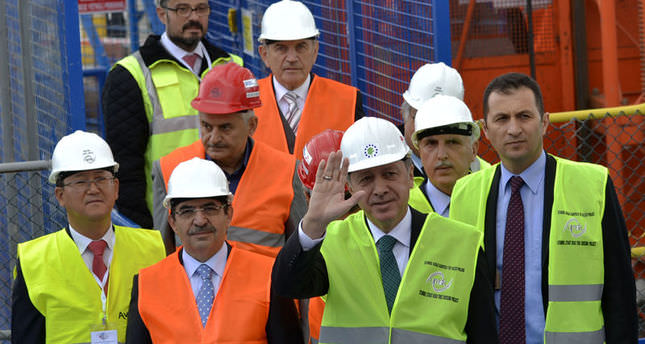 ISTANBUL — Ahead of Turkey's first popular presidential elections on Aug. 10, key figures in the Turkish government, including Prime Minister Recep Tayyip Erdoğan, Deputy Prime Minister Bülent Arınç and AK Party Vice Chairman Numan Kurtulmuş commented over the weekend on the upcoming polls and Erdoğan's possible candidacy. Attending the inauguration of the Eurasia Tunnel Project in Istanbul, Erdoğan on Saturday said, "On Aug. 10, the nation will go the ballot box to elect their own president."

Erdoğan chose to use the word "president," which refers to the position in countries such as the U.S. or France, contrary to the Turkish term "Cumhurbaşkanı" which refers to the position of current Turkish President Abdullah Gül. Erdoğan's remarks and word selection triggered further speculation that Erdoğan desires the establishment of a semi-presidential system through a constitutional amendment.

Erdoğan stated that ahead of the presidential elections in 2007, certain groups tried to close off the AK Party to impede Turkey's growth, but the party has adopted a firm stance and measures to counter those attempts. Highlighting AK Party protected politics, law and democracy, Erdoğan said, "We [AK Party] amended the constitution through a package including 26 articles and the nation approved it with 58 percent [through a referendum]. We said the president will be elected by a popular vote and the crises during previous presidential elections are over now."

Erdoğan touched on last year's Gezi Park protests that started in Istanbul and then mushroomed in most of the cities of Turkey. He denounced the organization and stated that they are aiming to slow Turkey's growth by using those protests as a medium, but when they failed, they attempted a coup against the government on Dec. 17 by using the law as a medium. "I believe that those who want to stop Turkey's growth will not dare anymore.

Turkey's enemies received an answer from the nation on March 30 [local elections], and I hope they will not dare again," said the prime minister, vowing to ensure further growth of Turkey. The prime minister urged citizens not to be included in any case that aims to erode Turkey's growing economy and stability. Referring to the upcoming presidential elections on Aug. 10 and parliamentary elections due in 2015, he stated that in 2023, Turkey will be one of the 10 biggest countries in the world thanks to the AK Party's efforts.

In Bursa over the weekend, Deputy Prime Minister Bülent Arınç touched on Turkey's presidential election and offered his support to Erdoğan. Arınç said, "We [AK Party] believe that if our prime minister, Erdoğan announces his candidacy for the presidency, our President [Abdullah Gül] will support his candidacy with honor." Arınç stated that Erdoğan and Gül are expected to hold talks regarding the presidential elections in May and announce their decisions.

Arınç pointed out that the AK Party has emerged successful from every test it has faced. He also said the AK Party's success in the March 30 local elections would continue in the presidential election, as well. "After electing a president by a popular vote, I hope that we will celebrate AK Party's new ruling term and its success in the parliamentary elections in 2015," said deputy prime minister.

When asked for his thoughts on Gül's recent statements that he had no political plan for the future, Arınç said, "There is no point to evaluate those remarks in a different way."

He added that the recent remarks by both Erdoğan and Gül were no different from the previous ones. Arınç added that other political parties should take example from the AK Party and try to understand the nation, not despise them. He said, "They [other parties in Turkish Parliamentary] only complain, their aim is to receive around 10 percent of votes and have a seat in Parliament, but Turkey needs parties that think big."

On Erdoğan's possible candidacy, Kurtulmuş said that Erdoğan is very sensitive on this issue, that's why, he will hold talks with his deputies, AK Party members, delegates to clarify his decision regarding the presidential election.

When asked whether he is expected to take over as prime minister in the event Erdoğan is elected president, Kurtulmuş said, "We never discussed this issue with my prime minister [Erdoğan]. I personally prefer to talk about the AK Party's future concerning ideologies, rather than individuals." Regarding the rift between the Gülen Movement and the government, Kurtulmuş denounced the movement and said, "This is not the first tutelage that Turkey has been faced with. For example, there is also a tutelage that tried to prevent the presidential elections in 2007 or there was tutelage on Feb. 28 to overthrow the government, but Turkey left all these behind."

Kurtulmuş stated that for the sake of state, Turkey will fight against the parallel organization, which is composed of Gülenists' infiltrators in the government. "This is no longer AK Party's issue alone. You do not have to support the AK Party and you may want another party to take power, but dirty plotting is not the way to go to change the ruling party," said Kurtulmuş.

He added that there is an open democracy in Turkey and if the movement wants to be included in democracy, they should set up a party within the scope of legal regulations.