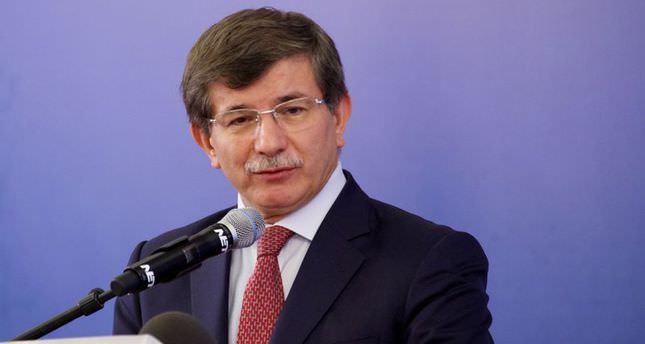 by daily sabah
Apr 21, 2014 12:00 am
ISTANBUL — Speaking at the AK Party's Konya branch meeting yesterday, Foreign Minister Ahmet Davutoğlu said the Dec. 17 operation targeted Prime Minister Recep Tayyip Erdoğan and the entire AK Party, yet the real target was Turkey's future. The Dec. 17 operation was orchestrated by the Gülen Movement, which is headed by the U.S.-based controversial imam Fethullah Gülen and controls many businesses in the education and media sectors.

Touching on the local election results, Davutoğlu thanked the people of Konya for voting for the AK Party. Erdoğan's party gained 64.3 percent of the vote, which was one of the highest statistics in the history of Turkish elections. He also saluted party members working in the Konya branch for their efforts in reaching voters and securing their votes.

"It was not an ordinary election. Every election plays a significant role in a country's future by shaping its future. But the last election was one of the main providers of the continuation of 12 years of political and economic stability, security and shaping the country's future in a positive way. Such a positive atmosphere was bred in the economy following the elections. Turkey is ready to continue and increase its investments. Through the fabricated and baseless allegations of the Dec. 17 operation, Turkey's clear future was targeted. Yet, the Turkish people remember their previous experiences and realize the treason and danger of the Gülen Movement. That is why the AK Party gained the number of votes it did in Konya. Two million people gathered in Istanbul for the election campaign and that is why more than 90 percent of voters attended the elections. Those targeting Turkey's future must receive the message sent by the people," he said.

Davutoğlu said the AK Party is capable of predicting and creating solutions to the people's problems and doesn't shy away from tough problems in the country; yet "the Republican People's Party [CHP] does not even discuss the reasons it lost the elections. It has to understand why it has dozens of problems and ask itself what to do in order to handle the upcoming processes."
Last Update: Apr 21, 2014 10:38 pm