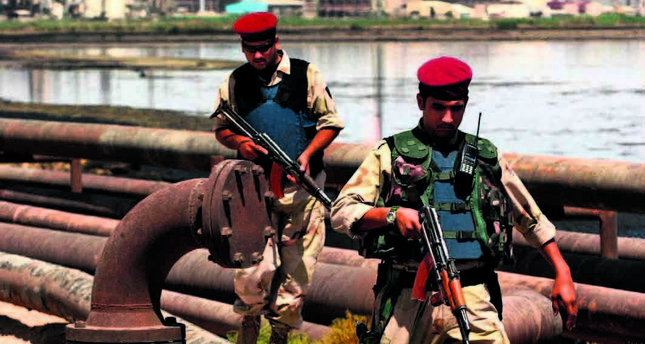 by Ali Ünal Apr 21, 2014 12:00 am
ANKARA — Negotiations between the Kurdish Regional Government (KRG) and the central Iraqi government for the export of oil from the KRG to world markets via Turkey have continued for months and are yet to reach a conclusion. However, this continuing deadlock affects the KRG's economy negatively and Kurdish officials seem determined to solve the problem, even without Baghdad's approval. The latest comments from Kurdish officials show Irbil, the capital of the KRG, is beginning to lose patience regarding the ongoing dispute on revenue sharing with Baghdad. Nechirvan Barzani, the prime minister of the KRG, said Sunday negotiations with Baghdad to resolve energy and budget issues made no progress and warned that Irbil's patience has limits.

"We were expecting to reach an agreement within Iraq and for that we showed a lot of patience, but our patience has a limit," Barzani said while warning that the KRG may find its own solution if Baghdad continues its uncompromising attitude. "If we know we can't reach an agreement, we will have our own solution," he added.

KRG officials are currently having problems receiving oil money from Baghdad and are therefore having difficulty paying salaries of civil servants. The central government recently sent the budget for only January and February salaries. However, KRG officials say Baghdad still has not sent Kurdish's budget payments for March and April. Kurdish officials also added that even though they are constitutionally entitled to receive 17 percent of the national budget, in the past Baghdad paid them only a little over 10 percent.

On the other hand, Baghdad is still sending mixed signals over the ongoing dispute.

At the end of March, both governments temporarily agreed that the Kurdish region will be entitled to export 100,000 barrels per day through the Turkish-Iraqi pipeline network and this procedure is supposed to be launched from the port of Ceyhan as of April. Two weeks after this announcement, the Iraqi oil minister stated that the long dispute between Baghdad and Irbil could be coming to an end but there is no sign of an agreement yet.

The Turkish side is waiting for Baghdad and Irbil to reach an agreement before the oil may be sold to buyers in Turkey and internationally via the Mediterranean port of Ceyhan but Turkey's waiting may end soon due to technical reasons. According to sources from the Turkish Ministry of Energy, about 1.5 million barrels of Kurdish crude oil have been received to date and Ceyhan port has a storage capacity of around 2.5 million barrels. Regarding this issue, Turkey's Energy Minister Taner Yıldız said, "Whenever we reach this storage limit, we have to decide about the next steps."


However, Yıldız reiterated his hope that Irbil and Baghdad settle on a revenue-sharing deal in a short time.

On the other hand, the expert believes a deal with Irbil and Baghdad is not likely in the coming days due to the Iraqi elections which will take place in May. "The deal with Baghdad does not look very promising, especially because the Iraqi elections are under way and the wrangling over the formation of the new Iraqi government will ensue in the coming days and months after the elections," said Zulal.

"In the past months, the KRG administration experienced serious problems in terms of revenue-sharing and it affected the economy in the Kurdish region," said Kardaş. "Therefore, the Kurdish side would like to solve the ongoing dispute as soon as possible. But Baghdad is sending mixed messages and its real intention is hard to predict. Moreover, Iraq is going to have an election in May and election results may increase uncertainties. Under these circumstances, it's hard to predict when Irbil and Baghdad may reach the deal."

Consequently, Kurdish oil exports are stalled in a row over revenue-sharing and if Baghdad and Irbil can reach an agreement on distribution of revenue, it will have a positive impact on regional stability. However, if the Kurdish side decides it would be better off to go it alone, it may increase tension in the whole region.
Last Update: Apr 21, 2014 11:38 pm
RELATED TOPICS