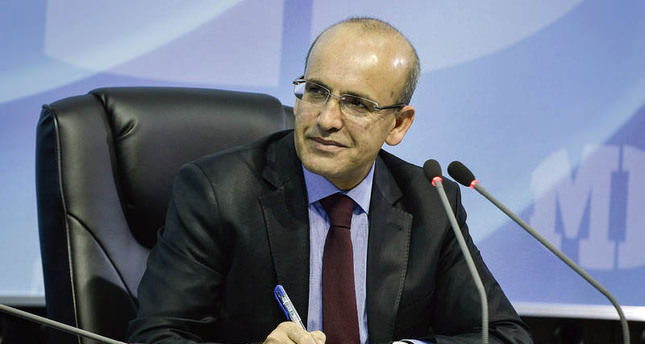 ANKARA — The Fed's decision to taper its large-scale asset purchases caused turmoil in emerging markets, including Turkey. Moreover, the Dec. 17 operation initiated by police officers and prosecutors linked to the shadowy Gülen Movement also affected Turkey's reputation in the eyes of international investors. However, the ruling Justice and Development Party's (AK Party) victory in the local elections on March 30, coupled with appreciating Turkish lira and booming stocks, showed that those who questioned Turkey's stability were mistaken.

Daily Sabah spoke to Minister of Finance Mehmet Şimşek to find out how the negative perception changed after the elections and get his insight on hot topics such as taxation of social media companies and the Financial Action Task Force (FATF) decision to keep Turkey on the grey list.

Three key results have emerged from the ballot boxes.

First, political stability is here to remain. Second, the majority of people believe that the corruption allegations are politically motivated. Third, the presidential elections to be held in August will be smooth.

Not surprisingly, the strong support for the ruling party on March 30 has eased investor concerns. This is reflected in the financial markets' performance over the past three weeks. Since March 28, 2014, foreign inflows into equity and bond markets amounted to $799 million and $1.1 billion, respectively.

But the Fed's tapering decision changed perceptions of emerging markets, including Turkey. Do you think that the coming days will be challenging?

No doubt 2014 is a challenging year for many emerging market [EM] economies. The Fed's tapering, which implies a reduction in global liquidity, has increased EM vulnerabilities since May 2013. On top of that, domestic demand is slowing down in many EMs, and new geopolitical tensions such as those between Russia and Ukraine have emerged.

While the Fed is expected to finalize its monthly asset purchases this year, we still think the interest rates in the U.S. will remain low for quite a long time. In addition, the European Central Bank may implement expansionary monetary policies to address deflationary concerns.

These will have a positive impact on emerging economies such as Turkey.

However, Turkey has strong fundamentals making it more resilient to shocks. This was well proven during the global financial crisis.
This time around we are again well prepared. Should the need occur, we have fiscal space to support domestic demand. Our general government deficit was just 1 percent in 2013, one-fifth of the average deficit recorded by OECD member countries. Please note that it came down from 10.8 percent of GDP when we took office in 2002.

In addition, Turkey's banking sector is healthy. It is well capitalized with a capital adequacy ratio of 15.5 percent in February 2014. This ratio is nearly twice the required ratio of 8 percent. The sector also has a solid asset quality with NPL ratio less than 3 percent.

Turkey's weak spot is its relatively large current account deficit. However, we expect a significant adjustment in 2014 for a number of reasons. First, a slowdown in domestic demand is likely to curb imports. Second, external demand is strengthening as the eurozone pulls out of recession. Third, the depreciation of the Turkish lira enhances international competitiveness. Fourth, global commodity prices are not rising as fast as they did in the last decade. Finally, gold imports are likely to fall and Turkey's tourism revenues will increase. We expect the current account deficit to narrow to a more manageable level.

You recently stated that budget performance is on track with government forecasts. When you consider other macroeconomic targets such as inflation and growth, do you think all of them are attainable?

Our growth estimate of 4 percent may seem a tad optimistic.

However, we still believe that it is attainable for a number of reasons. First, tax collection data and supply side indicators such as industrial production and real sector confidence index point to moderate growth during the first quarter of this year, despite political noise.

However, upside risks to our inflation targets have risen. In line with the depreciation of the Turkish lira, an increase in unprocessed food prices and unfavorable base effects, inflation has recently been on the rise. We expect inflation to trend down in the second half of the year. The macro-prudential measures which we introduced early this year and a tight monetary policy should help during this process.

In its last meeting, FATF decided to keep Turkey on the grey list. Do you think this decision was objective?
Is there any preparation to withdraw from the grey list in the next FATF meeting?

In order to strengthen efforts to combat the financing of terrorism and address the deficiencies underlined by the FATF, Turkey enacted Law No. 6415 on the Prevention of the Financing of Terrorism on terrorist financing issues in February 2013 and published the Regulation on the Procedures and Principles Regarding the Implementation of the Law No. 6415 in May 2013.

Nevertheless, the FATF still argues that Turkey has some deficiencies regarding freezing terrorist assets under international standards including FATF Recommendations and U.N. Security Council resolutions.

We believe that the remaining minor shortcomings do not justify keeping Turkey on the grey list. Turkey has worked in close collaboration and coordination with the FATF Secretariat and interested FATF member delegations.

We believe that Turkey has clearly demonstrated its commitment to comply with international standards as stipulated by the FATF. As indicated in the FATF's follow up report dated Oct. 7, 2013, it is clear that terrorist financing has been adequately criminalized in Turkey.

Yet, we find it hard to understand the justification for keeping Turkey on the grey list.

The share of indirect taxes in tax revenues is quite high in Turkey. Do you have any plan to reduce its share in revenues?

Many countries have raised indirect tax rates following the global financial crisis. In contrast, we have reduced the VAT on education, healthcare, textiles and tourism. As a result, the effective VAT rate has declined to 14.4 percent in 2014 from 15.8 percent in 2005. The average VAT rate in the EU is 21.5 percent in 2014. With 18 percent, Turkey has the second lowest VAT rate compared to EU member states.

Indirect tax rates are only high on tobacco products, alcoholic beverages, automotive and gasoline. The former two are in line with World Health Organization (WHO) and OECD recommendations. The latter two are to reduce our import bill and the current account deficit.
Please note that we have amended the tax code reducing the tax burden on employment and investments.

In addition to these, we have introduced a new investment incentive scheme, reducing the corporate income tax rate down to 2 percent, eliminating personal income tax and social security contributions depending on the type and location of new investments.

Furthermore, we submitted a drafted Income Tax Law to the Parliament last year. It is aimed at simplifying the tax code, broadening the tax base, and reducing informal economic activity.

Turkey is currently having taxation problems with some social media companies. Can you comment on this?

Unfortunately some social media companies operating in Turkey avoid paying taxes by not having offices in Turkey. This is an important problem that needs to be addressed both locally and internationally. That is one of the reasons why the OECD has created a working group to minimize international tax evasion. Likewise, we are working on a set of alternatives to resolve such problems in line with international tax practices.

Who is Mehmet Şimşek?

Minister Şimşek holds a B.S. in Economics from Ankara University and went on to work as a research assistant in the International Economics and Economic Development Department of the same university. He subsequently studied in the U.K., having been awarded a State Scholarship to Exeter University, from which he obtained an M.Phil. in Finance and Investment.

Before entering politics, he worked for Merrill Lynch in London for seven years as chief economist and strategist for the emerging EMEA. He was appointed minister of finance in May 2009, after having served as the minister of economy for about two years. He was elected to the Parliament in July 2007 and June 2011, representing the AK Party.

Minister Şimşek was awarded the title of Finance Minister of the Year for Emerging Europe 2013 by Emerging Markets Magazine and also nominated as one of the 500 most powerful people on the planet by Foreign Policy in 2013.
Last Update: Apr 22, 2014 10:57 pm