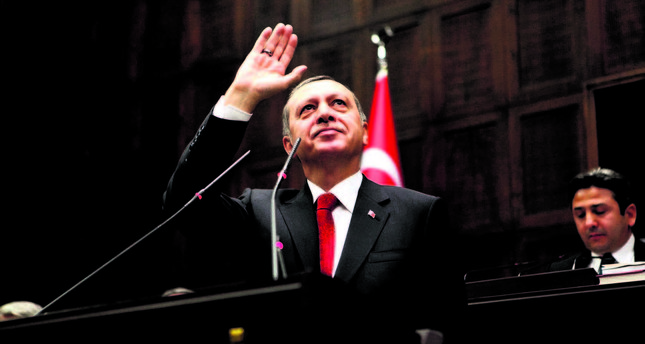 On the 94th anniversary of the establishment of the Turkish Grand National Assembly, the AK Party government seeks to enhance participatory democracy by introducing the district electoral system

ISTANBUL — As Turkey marks the 94th year of the Turkish Grand National Assembly (TBMM), the country's political developments in recent times have been praised by the nation despite coup d'états in 1960, 1971, 1980, the military memorandum of 1997, the military tutelage dominating the country's history and all the latest attempts by the Gülen Movement to erode the Turkish government by infiltrating the police force and judiciary.

The Turkish government recently adopted a presidential system whereby the president will be elected by popular vote rather than a parliamentary election.

Giving power to the Turkish people, the government is trying to give voice to its citizens through the recent democratization amendments.

In its latest move, the Parliament is discussing incorporating the first-past-the-post election system to consolidate the representation of citizens in the Parliament in line with the democratization package proposed by the ruling AK Party in 2013.

Including reforms in the democratization package, the AK Party proposed reducing it to 5 percent for a political party to enter Parliament or removing the threshold completely and implementing the single-member district system.

Contrary to the 10 percent threshold system, the first-pastthe- post election system has been on the Parliament's agenda recently.

Similar to the electoral system in the United Kingdom, under the narrowing of the district electoral system Turkey will be divided into 550 electoral districts and deputies will be elected through a majority vote. The new electoral system that allows deputies to be directly elected by citizens is expected to pave the way for participatory democracy. According to the first-past-the-post election system, voters will not only vote for political parties but also for candidates to represent them.

Speaking after the cabinet meeting, Arınç stated that the AK Party would choose between these two alternatives. Noting that opposition parties who complained about the 10 percent threshold did not make any comment or take any steps regarding the proposed options, Arinc said the AK Party was "working on simulations of two options and will take to the Parliament the one which would contribute better to the development and stability of Turkey."

Associate Professor Hikmet Kırık at Istanbul University said, "The first-past-the-post election system will be useful in terms of providing autonomy to deputies since it is a fact that in Turkey deputies are restricted to act independently without their leaders' permission.

Deputies will be able to focus on micro-problems concerning their districts and will be in touch with their voters directly.

The recently introduced electoral system can be considered one of the steps for redesigning Turkish politics in terms of consolidating the equality of the representation issue in the Parliament. The more divided districts will provide more equality for representing the people. Yet the AK Party must take the opposition's seats in the Parliament into consideration while determining the districts.
RELATED TOPICS