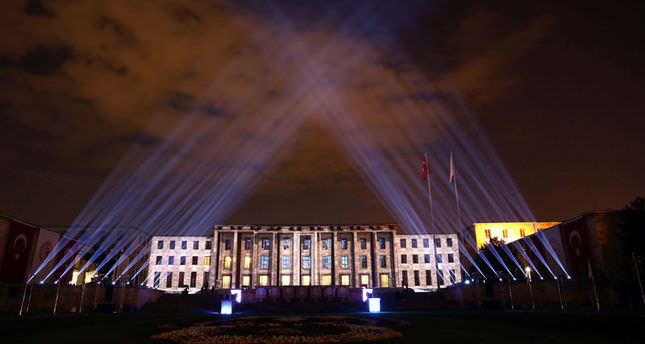 by Daily Sabah Apr 23, 2014 12:00 am
ISTANBUL — Turkey is once again filled with excitement as the country is about to experience its first presidential election by popular vote. Though the position is largely a symbolic one, in which the president serves as the nation's top dignitary, the post was never open to popular elections. However, all this is about to change. When people line up at the ballot boxes on Aug. 16, they will be voting for Turkey's top dignitary for the very first time. In the past, the president of the Republic of Turkey was a post determined not through elections but through selection by members of the Grand National Assembly (TBMM).

The road to reach a democratic presidential election did not come easily. It all started with a proposed referendum in 2007, which then received approval from the TBMM in 2012. Now in August, Turkey will experience potentially two-pronged elections. On Aug. 16, the Turkish people will vote for the candidate they see fit to represent their country on the highest of all levels. If there is a clear consensus, Turkey's new president will take office.

However, if the Turkish people have not agreed on one candidate, a second round of voting in which only the top two candidates on the ballot will be held. The Supreme Election Board (YSK) will preside over the process to ensure a just result.

There are expected changes in the role and responsibilities of Turkey's new democratically elected president as well.

Odds have it Turkey will take a step away from the parliamentary system it has traditionally used and instead move toward the half-presidency system used in France. This would see to it that the people's president would no longer be the diplomatic and symbolic figure of past years but would also share in the responsibilities that in the past fell to the prime minister.

The state's coffers will not be used to fund the campaigns of the presidential candidates. Instead, candidates will be held responsible for raising the financing they need to fuel their historic campaigns. Through this method, the people of Turkey will choose whether or not they wish to contribute to the efforts of their favorite candidates and their tax dollars will not be spent on costly campaigning, commercials and rallies.

This system will resemble the one utilized in the United States, except for one major factor. In the U.S., candidates receive most of their campaign funds through private sponsors, whether individuals or corporations. However, public funds are made available for candidates in both primary elections, in which each party determines their leading candidate, as well as in the final election in which presidential candidates from each party face off to win the affection of the country's citizens. The critical difference between Turkey's upcoming presidential elections and its U.S. counterpart is that tax dollars will not be spent on any individual hoping to earn the public's affection.

These upcoming presidential elections are not only a first for the nation, but instead hold a much more symbolic meaning as well. By opening the country's most important position to the will of its public, Turkey is making a statement. Coming from its dark and anti-democratic past, the past decade has seen Turkey take large strides in democratization, opening the presidential elections directly to the public might be Turkey's greatest stride yet.
RELATED TOPICS