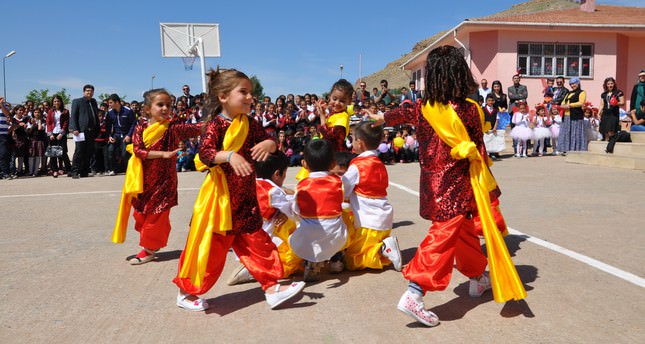 by AA Apr 24, 2014 12:00 am
ISTANBUL — Schoolyards and main squares all around the country celebrated the 94th anniversary of the establishment of the Turkish Parliament yesterday on National Sovereignty and Children's Day with dances and speeches.

However, only a handful of the hundreds of thousands of Syrian children who fled to Turkey were able to do so, reflecting on their lost youth, shattered families and uncertain future.

As Turkey celebrates a nationwide festival for its young people, an investigation by Anadolu Agency revealed thousands of refugee children living in the country face huge problems adjusting to life in their new home.

Children's Day, also known as the Holiday of National Sovereignty and Children, has been an official celebration since 1920. The celebrations, which often feature outdoor displays of song and dance, also host children from overseas who stay with Turkish families.

However, many children coming to Turkey face a tougher future than those arriving for these celebrations. The number of refugee children in the country reached an estimated half a million, mostly young people fleeing war and persecution in Syria, Iraq, Afghanistan, Iran and Somalia.

The number of such children in Turkey has been continuously increasing since the start of the Syrian conflict in March 2011. From the very beginning of the war, Turkey, with its historical, cultural and regional ties, operates an open-door policy, providing all types of humanitarian aid to Syrian citizens affected by the tragedy.

According to government figures, Turkey currently hosts more than 200,000 Syrians in 20 temporary accommodation centers in 10 cities, while 700,000 people live outside these centers in various cities across the country.

Despite the help they receive from the Turkish state, many children face significant problems with accessing education, healthcare and adapting to life in a new country.

A former spokesman for the United Nations High Commissioner for Refugees, Metin Çorabatır, told AA that although Turkey fulfilled its international obligations by offering protection to the refugees and supplying them with safe places as well as health and education services, other issues persist. "In addition to the financial and psychological problems they have, most of them are not officially recognized, which prevents them from enrolling in school. As for the camps, even finding a good teacher is also a problem."

Just over half the children in these camps are aged from 18 years old and younger, according to the 2013 Field Survey Results from the government's Disaster and Emergency Management body, with Syrian children forming the overwhelming majority.

Çorabatır says that although over two-thirds of Syrian refugee children in the camps attend school, for those outside of this accommodation, only 14 percent are in education. "This very low percentage of those out of the camps needs attention," he commented.
In the central Turkish city of Konya, AA spoke to 10-yearold Verde, a Syrian girl who left school in the second grade, who says she wants her education to continue in Turkey. Her mother, Fatima, who fled to Turkey seven months ago to escape the conflict said, "She cannot go to school as we do not have a residence permit here."

The 13-member family, including 10 children, has only one breadwinner, 12-year-old Hasan, who works as a teamaker in a local coffeehouse. None of the children receive any formal or informal education.

Eight-year-old Jasmine says she wants to go back to Syria as soon as the conflict ends, adding that although she is happy with her new Turkish friends, she has some language problems.

Çorabatır noted that this new environment may prove challenging for children in particular, "The most frequent problems that refugee children face include adaptation difficulty, anxiety resulting from poverty and the pessimism of their parents, misery due to leaving all their belongings behind and very often psychological trauma."

Survey results show that a quarter of the children in the camps has a sleeping disorder. This figure falls among adults and children out of the camps.

Families living outside this accommodation can only access public hospitals if they are officially registered, while those inside the camps are supplied with care in certain health centers. About a quarter of the children in the camps and slightly less than half of those outside are not vaccinated against polio.

Similarly, about a quarter of male and a third of female children in the camps do not have a measles vaccination.

This rises to about two-in-five male and female children outside of the camps.

Considering that a large percentage of Syrian refugee children who are not vaccinated against polio and measles live outside of the camps, there are concerns about the health of the wider population.
RELATED TOPICS