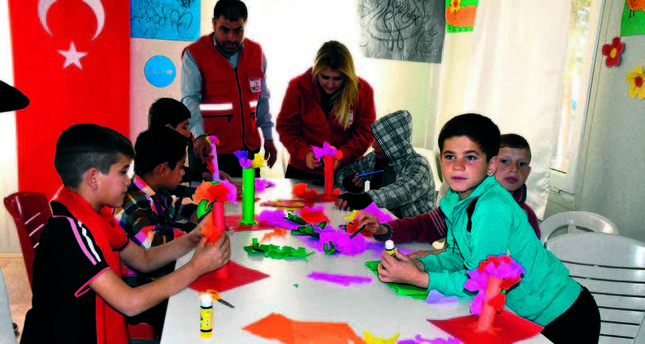 ANKARA — The Syrian civil war entered its fourth year with serious political, economic and social consequences for the entire region.

According to official data, approximately 150,000 people died in the Syrian war.

Although the Syrian refugee crisis is one the biggest humanitarian crises in the world, there have not been any studies conducted that explore the status of all Syrian refugees spread throughout host countries. However, a recent study conducted by the Center for Middle Eastern Strategic Studies (ORSAM) addressed this gap with comprehensive research.

The report titled "The Situation of Syrian Refugees and Mass Migration Projections from Syria to Neighboring Countries: Findings, conclusions and recommendations" will be released to the public today in Ankara.

The report is based on a six months of research and analysis carried out by ORSAM researchers in four countries, namely Turkey, Lebanon, Jordan and Iraq, and gives comprehensive information about the status of Syrian refugees in these countries. According to ORSAM Director Şaban Kardaş, the study offers the possibility of evaluating the broader picture and conducting a comparative assessment of the situation of the Syrians in the four countries that host vast majority of refugees.

According to the report, as of the end of 2013 there are 210,358 Syrians living in 15 tent cities, one transitional reception center and six container cities established across Turkey. Moreover, there are 600,000 Syrians living outside the camps in several cities. In Turkey, the Disaster and Emergency Management Presidency (AFAD) is responsible for the needs of Syrian refugees. According to official data, there are over 800,000 Syrians in Turkey. AFAD said 432,769 Syrians settled in camps and 222,411 of them returned to Syria.

The study shows Syrians in Turkey who live in camps have better living conditions compared to those in other countries; however, the living conditions outside of camps are more difficult. On the other hand, refugees struggle with emotional and psychological problems rather than problems related to the services provided in the camps in Turkey.

The findings suggest despite the many social activities for refugees, they are dissatisfied due to the boredom associated with camp life. It is for this reason that they prefer to live elsewhere, regardless of the many risks involved in such a decision.

The report draws attention to the fact refugees were initially considered temporary by the Turkish authorities, but they become a permanent phenomenon today. Moreover, the refugee situation has implications for both the Syrians themselves and local Turks with respect to their psychology and security.

According to the report, Turkey is leading the way in terms of camp conditions among the four countries hosting Syrian refugees.

There are no official camps in Lebanon due to government policy. The United Nations High Commissioner for Refugees (UNHCR) and donor countries maintain camps in Jordan.

In Iraq, the Kurdistan Regional Government (KRG), the UNHCR and nongovernmental organizations support camps there.

Notwithstanding a small amount of international aid, Turkey undertakes the financial burden and administration of all the camps in its territory. Syrian refugees are provided high-quality basic services, social amenities, activities and sanitation under AFAD's coordination.

In contrast, the Zatari and Dumiz camps in Jordan and Iraq, which house the majority of the refugees in their respective countries, offer low-quality services and amenities.

However, the findings reveal there is no direct correlation between the quality of services and the refugees' satisfaction. Even though services and camp conditions are important, issues such as the perception of freedom, flexible camp regulations and permission to work outside the camps are factors that play a decisive role in the refugees' satisfaction. In this respect, the report says that the KRG's flexible camp policy results in a greater level of satisfaction among refugees, even though the camp conditions in Iraq are much worse than those in Turkey.

In terms of new waves of refugees, the reports suggest that Lebanon and Jordan are at high risk of receiving more refugees.

Turkey ranks third after these two countries in terms of the risks associated with refugee flows. Iraq has the lowest probability of more refugees in the future.

The findings show that there is anger toward refugees in all four countries; however, there is no risk of an all-out social conflict.

The report also shows the refugees living outside camps struggle to survive in tough conditions. Moreover, Syrians have problems integrating socially in all four countries. Syrians in Turkey bear the additional burden of a language barrier. However, the findings suggest Turkey's advantages are in its geographical size, population and economic capacity. These advantages facilitate integration of refugees in Turkey. For example, the province of Gaziantep in Turkey is foremost among the provinces hosting Syrians.

In terms of ethno-sectarian polarization, Lebanon is a troubled country. The most important reason for this is the social and political structure of Lebanon, which is based on the population ratio of sectarian groups.

The report also analyses radicalization trends among Syrians, and according to the findings, the Zatari Camp in Jordan is the most likely place for misconduct, hence radicalization, owing to the size of the camp, dire conditions and insufficient security measures.

The findings reveal Syrian refugees want to return when the political and economic conditions in Syria are restored to stability.

However, they express hopelessness when asked when they expect the civil conflict to come to an end. Therefore, the report suggests Syrians need to prepare for even longer stays in their current host countries. The report also warns that the security situation in Syria will worsen and there will be a new mass exodus of refugees.

The report was prepared by ORSAM with the contribution of the Konrad Adenauer Stiftung. Director General of AFAD Fuat Oktay will deliver the keynote speech at the conference.
RELATED TOPICS